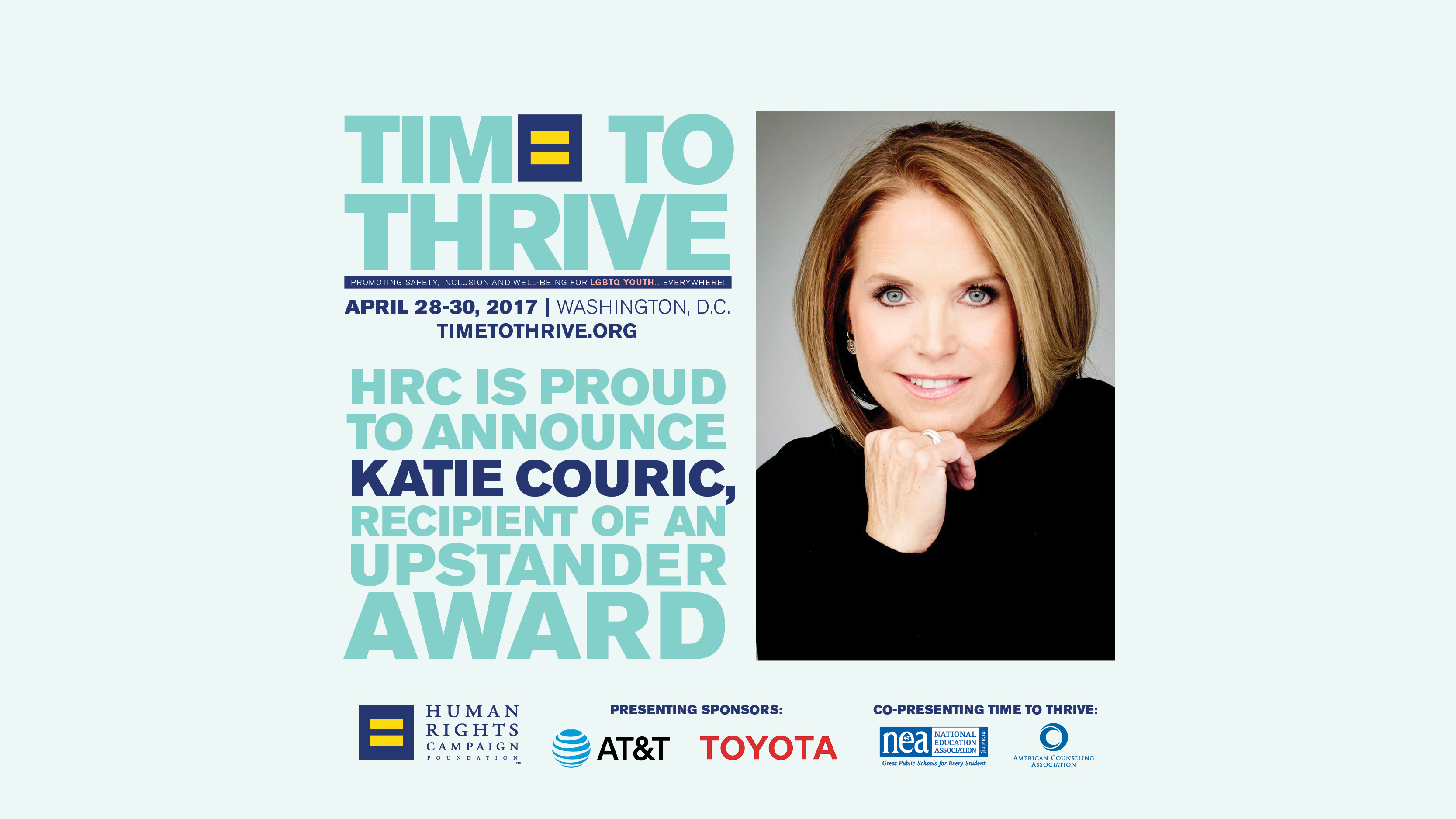 Today, HRC Foundation announced that Yahoo Global News Anchor Katie Couric will be honored at HRC’s annual Time to THRIVE Conference for her groundbreaking work raising up LGBTQ visibility, most recently in partnership with National Geographic on a documentary exploring gender.

HRC’s Time to THRIVE, the nation’s premier conference for K-12 educators, professional counselors and other youth-serving professionals on LGBTQ youth safety, inclusion and well-being, will be held April 28-30 in Washington, D.C., in partnership with the National Education Association and the American Counseling Association.

“We are thrilled to honor Katie Couric with our Upstander Award for the sensitive and compelling work she has done to advance understanding of the LGBTQ community -- and especially transgender youth -- with her groundbreaking interviews and new documentary,” said Vincent Pompei, chair of Time to THRIVE and director of the HRC Foundation’s Youth Well-Being Project. “Throughout the world, transgender and gender expansive people are striving to be who they are, often in the most difficult of circumstances. Katie’s work with National Geographic on this singular project  represents an enormous step in our journey to ensure the safety and inclusion of LGBTQ youth here and around the world and reflects her continuing commitment to telling our community’s important stories.”

Couric, the former Today Show co-host who at CBS News became the first woman to solo anchor an evening newscast, is the co-producer and host of the documentary Gender Revolution: A Journey with Katie Couric, which will premiere February 6 on the National Geographic Channel. The documentary not only explores deeply personal stories, but also the scientific, cultural and historical understanding of gender. In 2014 and 2016, she also interviewed transgender teenager Jazz Jennings, an HRC Youth Ambassador and star of the reality series, I Am Jazz.

Jazz will also be attending Time to THRIVE as a special guest, as will members of HRC’s Parents for Transgender Equality Council - including Jazz’s mother, Jeanette, and Vanessa and JR Ford, who are featured in Gender Revolution.

An award-winning journalist and television personality, Couric is also a tireless cancer research advocate, documentary film producer and New York Times best-selling author of The Best Advice I Ever Got: Lessons From Extraordinary Lives. As Global News Anchor for Yahoo since 2014, she reports on live world events, conducts groundbreaking interviews with major newsmakers and cultural figures.

Couric created an independent production company, Katie Couric Media in 2015 and, in addition to her partnership with the National Geographic Channel on Gender Revolution, she is also the executive producer of the documentaries Fed Up, which looks at the obesity epidemic, and Under the Gun, which traces the history of gun violence in America.

The Time to THRIVE Conference features 72 workshops by more than 45 national and grassroots organizations dedicated to improving the lives of LGBTQ youth. Special conference guests and additional speakers.

Time to THRIVE is the premier national convening of educators and youth-serving professionals to build awareness and cultural competency, learn current and emerging best practices, and gather resources from leading experts and national organizations in the field. Time to THRIVE will take place April 28-30 in Washington, D.C. with Toyota as the presenting sponsor. To register, visit www.TimeToThrive.org.