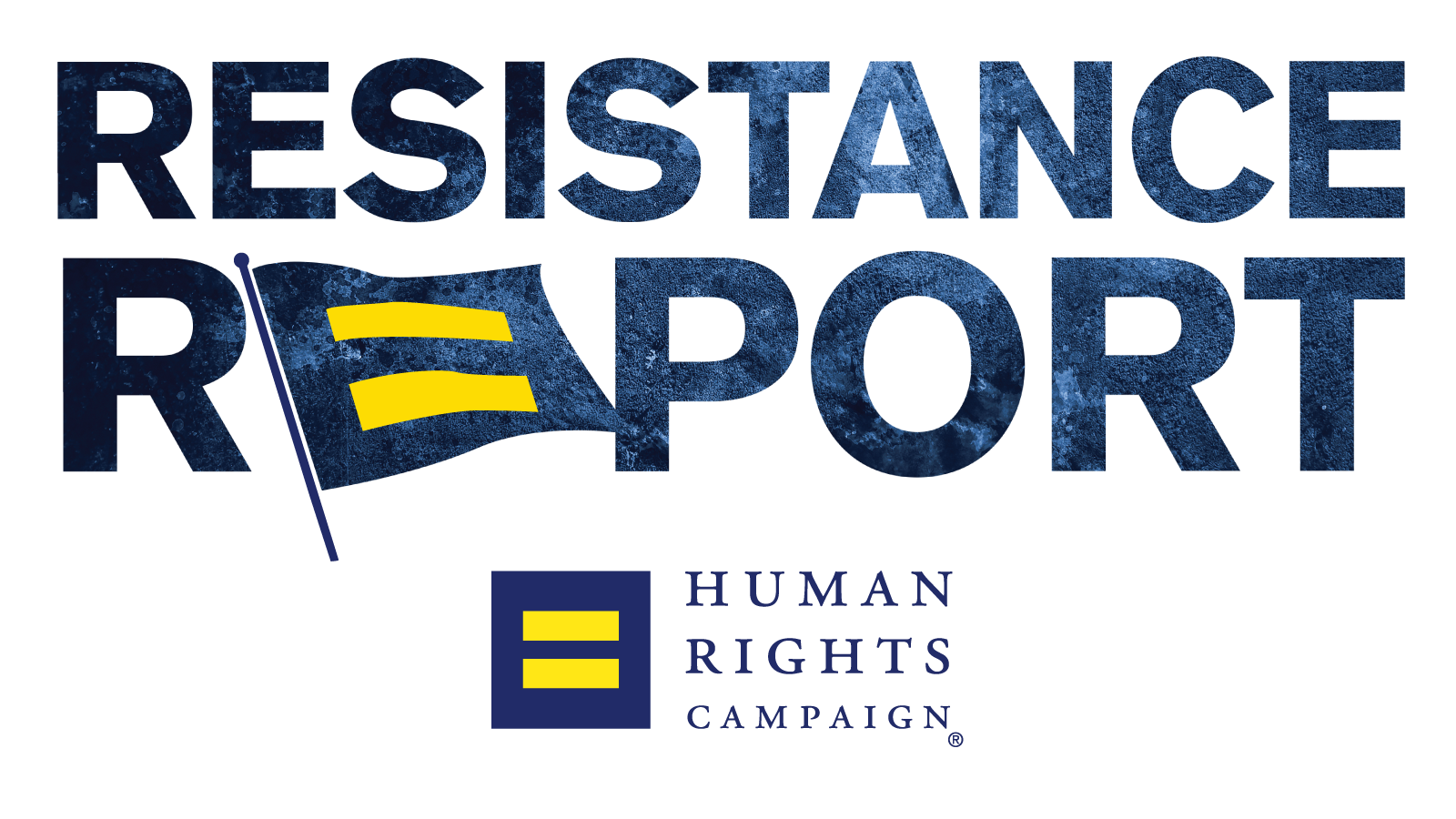 The Resistance Report provides bi-monthly updates on the latest actions HRC is taking to unite, resist and enlist against the injustices happening to the LGBTQ community on the federal, state and local levels. From our grassroots efforts fighting discriminatory legislation and legislators, to protesting and marching in cities nationwide -- we are fighting everyday to ensure full equality and justice is achieved for everyone, everywhere.

In Wake of Charlottesville, HRC Stands Proudly With Our Allies Against Hate

HRC strongly condemns the white supremacists’ rally, violence and attacks on counter protesters in #Charlottesville, #Virginia. We call on all national leaders, from the President and Vice President on down, to explicitly condemn this violent extremism.

In the immediate aftermath of the white supremacist rally in Charlottesville, Virginia, earlier this month, HRC joined civil rights groups condemning the violence and urged Congress to establish a committee to address hate crimes and white nationalism. Moreover, HRC President Chad Griffin (@ChadHGriffin) joined major civil rights and faith leaders in a unified call for Donald Trump to personally and directly disavow white supremacists and the act of domestic terrorism in Charlottesville.

After 3 days of pressure, @realDonaldTrump finally denounces white supremacists; still waiting for him to rid the @WhiteHouse of the same.

Sherrilyn Ifill, President and Director-Counsel of the NAACP Legal Defense and Educational Fund, Inc. (@Sifill_LDF) took over HRC’s Twitter to discuss Charlottesville, the rise of the violent white supremacist movement in America and Trump’s failure to speak out clearly and unequivocally to condemn the violence and to hold our country together.

Egregiously, Trump backtracked on his statements denouncing white supremacists and instead doubled down on his support for them. HRC highlighted Trump’s embrace of racists, anti-Semites, neo-Nazis and homophobes in a chilling new video.

.@realDonaldTrump, these are not “fine people." This is hate. pic.twitter.com/2VQOW1yC7f

HRC also denounced Mike Pence, who indisputably aligned himself with Trump and his neo-Nazi, racist, anti-Semitic supporters, saying to reporters that he stood by him and unhinged assertions that there were “fine people” in the mob of white supremacists and anti-Semites who gathered there.

.@Mike_pence you had a chance to stand up for justice. Instead, you doubled down on support for @realDonaldTrump's dangerous rhetoric. pic.twitter.com/WOMcNyKsFJ

Due to the outpouring of opposition from Texans from all walks of life, anti-#transgender legislation is dead for this session. #Texas #TX #LGBT #LGBTQ #YallMeansAll #Txlege

Due to the outpouring of opposition from Texans from all walks of life, anti-transgender legislation failed to pass during the state’s special session. HRC is proud to have worked throughout the regular session and special session with a coalition of organizations, including Equality Texas, the ACLU of Texas, the Texas Freedom Network and the Transgender Education Network of Texas.

HRC Rallies at the White House in Support of DREAMers

Today, HRC joined a National Day of Action to #DefendDACA recipients. . Currently, 10 extremist attorneys general have called for the Deferred Action for Childhood Arrivals (#DACA) program to be rescinded, leaving immigrant youth -- including 75,000 #LGBTQ Dreamers -- without work permits, driver’s licenses, and vulnerable to deportations. . Check out our story to learn more.

The future of young people in the country under an Obama-era program allowing undocumented immigrants brought to the U.S. as children hangs in the balance. Ten attorneys general from across the country have called for the Deferred Action for Childhood Arrivals (DACA) program to be rescinded, leaving immigrant youth -- including 75,000 LGBTQ Dreamers -- without work permits, driver’s licenses, and vulnerable to deportations. HRC joined FIRM, CASA, Planned Parenthood, MoveOn and more for a National Day of Action to defend DACA recipients.

We are resisting the politics of hate across the nation. Each and every day, HRC and our grassroots supporters are harnessing the full power of our democracy to protect our progress and resist. Check back for our next Resistance Report on HRC’s continued fight for full LGBTQ equality.