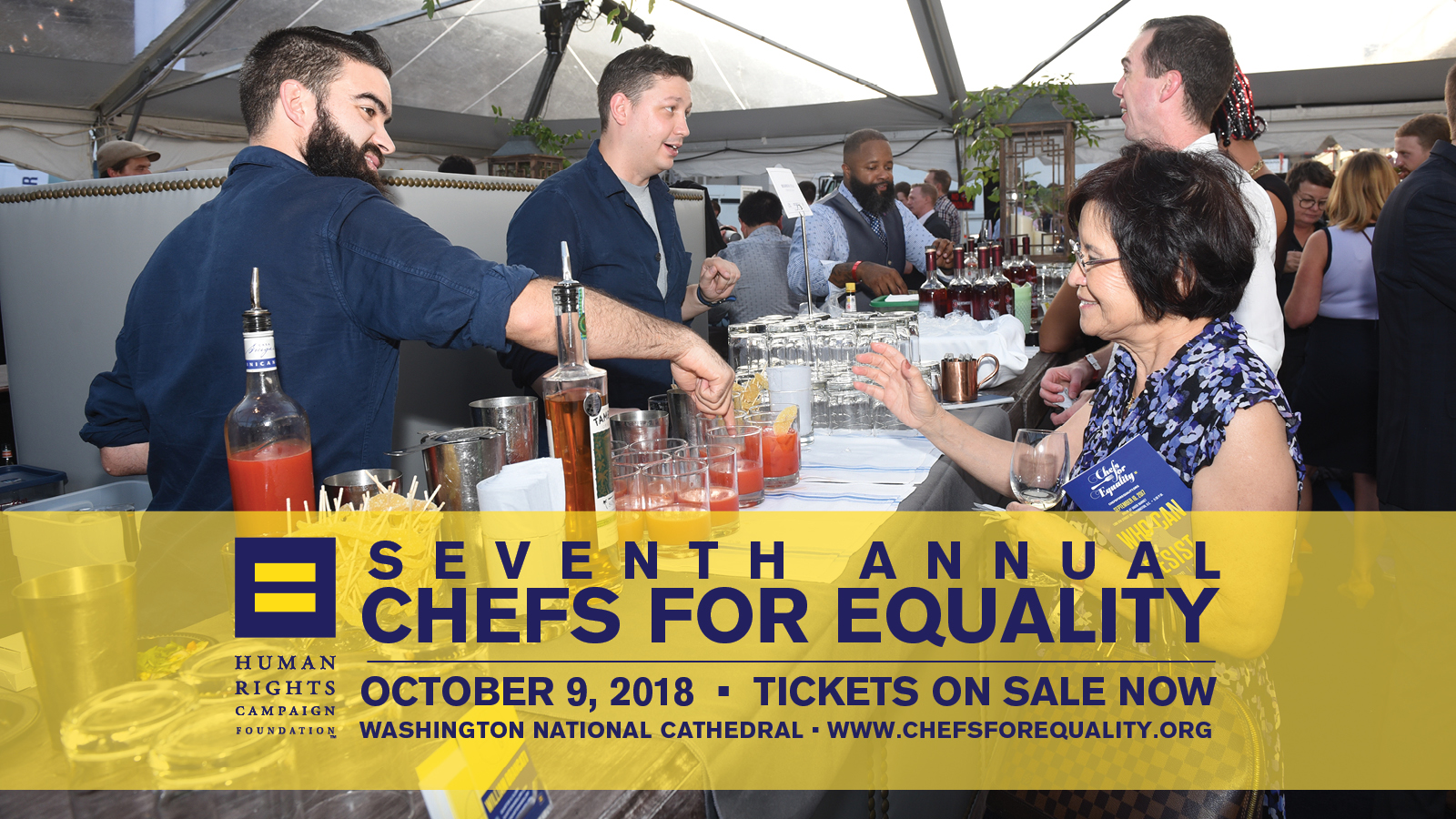 For the seventh consecutive year, HRC Foundation and prominent food writer David Hagedorn are bringing together the capital region’s top chefs, pastry chefs and mixologists for Chefs for Equality, an evening of food, cocktails and music to benefit the fight for full LGBTQ equality. Chefs for Equality will be held on Tuesday, October 9 for the first time at the Washington National Cathedral.

As they have for the previous six years, Christopher Vazquez and Rick Davis of Amaryllis Floral + Event Design will create all of the design for Chefs for Equality and serve as two of the event’s premier sponsors.

The Washington National Cathedral serves as a symbol of equality and justice in Washington, D.C., and for the nation; these same values have been the cornerstones of Chefs for Equality since its inception in 2008.

Chefs for Equality’s theme this year is “Deliciously Defiant” — a response to the alarming state of affairs under the Trump-Pence administration, which threatens freedom, especially that of LGBTQ people, women, people of color, immigrants and others daily. These challenges make the work of the HRC Foundation, the recipient of Chefs for Equality’s proceeds, more important than ever.

Chefs for Equality features more than 120 of the Washington area’s best-known chefs and mixologists. In addition to tasting and cocktail stations, the event also offers the opportunity for guests to dine at Chef Tables where celebrity chefs create lavish five-course paired meals in the middle of the action.

Chefs for Equality will once again feature the “5/10/15 Speed Diner,” — five dishes from 10 chefs in 15 minutes. Chefs for Equality ticket holders can purchase 15-minute time slots at two, diner-style, eight-person counters where they will enjoy a specialty cocktail and a mini five-course tasting menu prepared by five pairs of renowned chefs.

Tickets for Chefs for Equality can be purchased at hrc.im/ChefsTickets.

All proceeds from Chefs for Equality will benefit the HRC Foundation’s nationwide educational work for LGBTQ equality. The HRC Foundation works to educate the public and provides training and model policies that alter the fundamental nature of the institutions that govern the everyday lives of LGBTQ people everywhere. The HRC Foundation touches every aspect of LGBTQ life with programs that target our most sensitive and vulnerable interactions: helping with equal access to adoption and foster care; creating respectful and supportive school environments; helping healthcare providers increase LGBTQ competency; engaging in dialogue around LGBTQ equality in faith communities; helping corporate America adopt inclusive workplace policies and practices; and leveraging our domestic work to have an international impact. The critical work of the HRC Foundation enhances the lived experiences of LGBTQ people and their families by changing hearts and minds across the country and beyond.