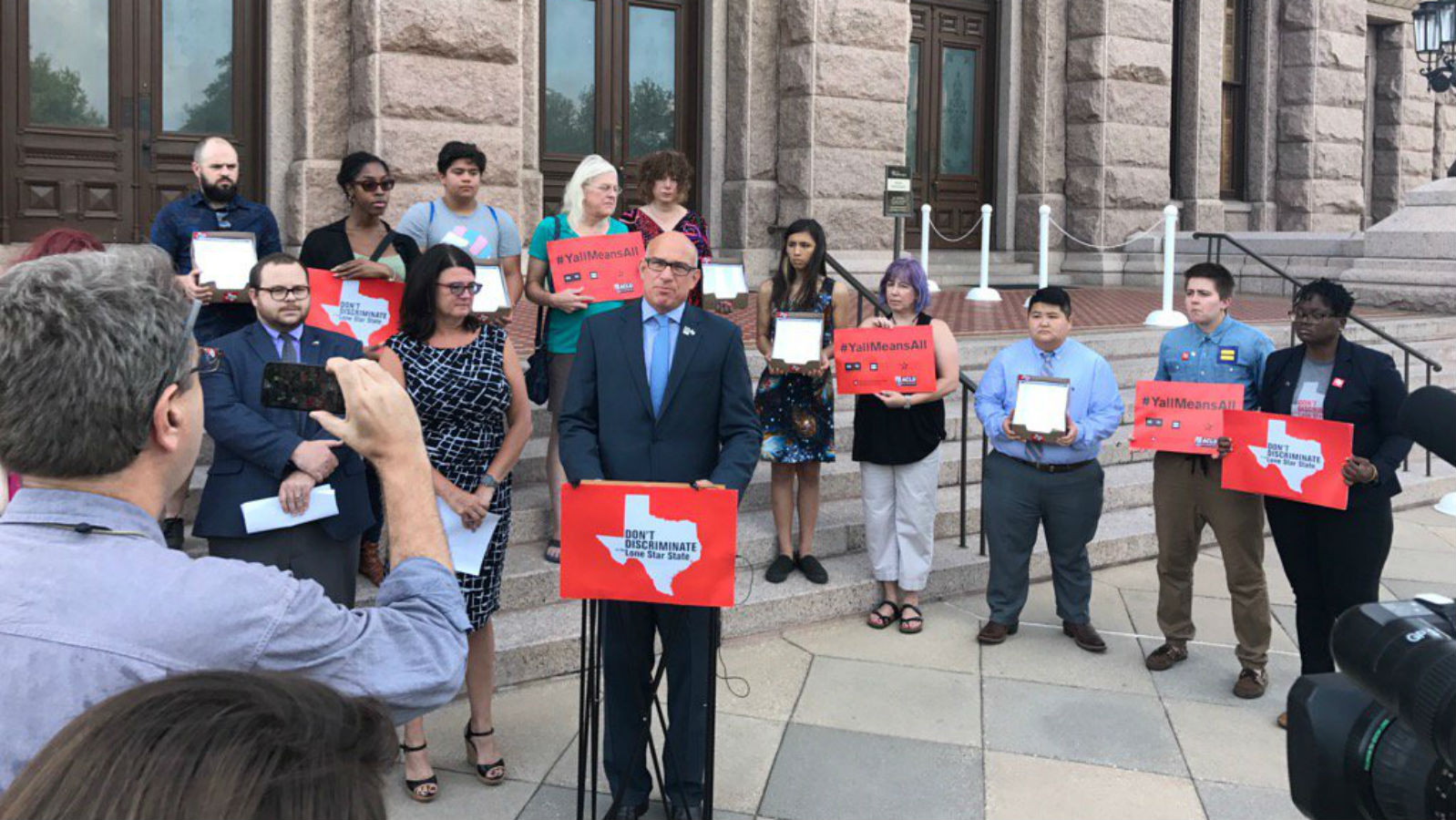 A group of LGBTQ and civil rights groups – including HRC, Equality Texas, the ACLU of Texas, the Texas Freedom Network and the Transgender Education Network of Texas – delivered a list of signatures from more than 50,000 Texans who have taken action this year to oppose discriminatory anti-transgender legislation such as SB6, HB2899, SB3 and HB46 and other anti-LGBTQ bills considered by Texas lawmakers.

Those bills were part of a slate of unconscionable anti-LGBTQ bills being pursued by Texas lawmakers, who have been working to systematically to roll back the rights of LGBTQ Texans, piece by piece. These 50,000+ Texans were not on board with that effort.

These 50,000 people include Texans from across the ideological spectrum, united by a single belief: legislating discrimination is bad for Texans, and bad for Texas.

Regarding the delivery of the petitions, the following spokespeople delivered these messages:

Brad O’Furey, government relations manager, Equality Texas: “Over the last 9 months, 50,000 Texans have taken time to raise their voices and speak out against discriminatory bathroom bills that directly target our transgender community members and their families for unfair treatment and harm. They have signed petitions, sent letters, made phone calls, dedicated hours of their time testifying at hearings and visiting with legislators – because Texans know: Discrimination has no place in our state. We have three more days to stop these “bathroom bills” and send a strong message of a people unified against state-sanctioned discrimination. And together, I know we will. Because in Texas, Y’all truly does mean all.”

Marty Rouse, national field director, Human Rights Campaign: “The 50,000 Texans and the many organizations that have spoken out against these bills demonstrate that there is no tolerance in Texas for discrimination – and there’s no doubt about the fact that these efforts are discrimination in action. And, for those who say that they are working on behalf of their constituents who want this bill, clearly those legislators weren’t paying attention at the Senate committee hearing for SB3, where the constituents opposing the bill outnumbered those supporting by a 12:1 ratio.”

Kathy Miller, president, Texas Freedom Network: “The deeply cynical campaign to pass a so-called ‘bathroom bill’ never passed the Pinocchio test with faith leaders, businesses and everyday Texans. This legislation has never been about protecting women in public restrooms. That’s why organizations that advocate for victims of sexual assault have strongly opposed it. So thousands of Texans across the state are sending a clear message to lawmakers today: stop telling lies to justify passing laws that discriminate against people simply because of who they are.”

Kali Cohn, staff attorney, ACLU of Texas: “The bills pending before the legislature are offered as a solution to an imagined problem,” said Kali Cohn, staff attorney for the ACLU of Texas. “The reason why law enforcement leaders and advocates for sexual assault survivors across the state oppose these bills is because they do nothing to advance public safety. Various sections of our criminal code, including voyeurism, indecent exposure, restraining someone without consent, and sexual assault, already outlaw the scenarios presented to justify this legislation. These bills are not about safety. They are about discrimination.”

Lisa Scheps, interim executive director, Transgender Education Network of Texas: “Our state lawmakers need to understand that a great many of their constituents and businesses in their districts do not want discriminatory laws in Texas. These ‘bathroom bills’ do nothing but make our great state look worse in the eyes of people and businesses that value ALL Texans.”

Who are these 50,000 Texans who took action by calling, writing or emailing their legislators? They are employees and customers of the hundreds of companies that spoke out. They are sports fans. They are families with children in public schools. They are faith leaders and Texans of many faiths. They include Texas members of the organizations below, many of whom dedicated countless hours to this effort. They are the hundreds people who spent hours traveling to hearings and waiting to testify against SB6, HB 2899, and SB3. They are investors. They are CEOs. They are heads of chambers and tourism organizations.

These names are being delivered to Governor Greg Abbott, Lieutenant Governor Dan Patrick, and Speaker Joe Straus. We ask that these elected leaders hear what thousands of their constituents are have taken direct action to say to them:  Texas must stop wasting taxpayers' time and money to pursue discriminatory legislation that would harm not only some of our most vulnerable Texans, but all Texans.