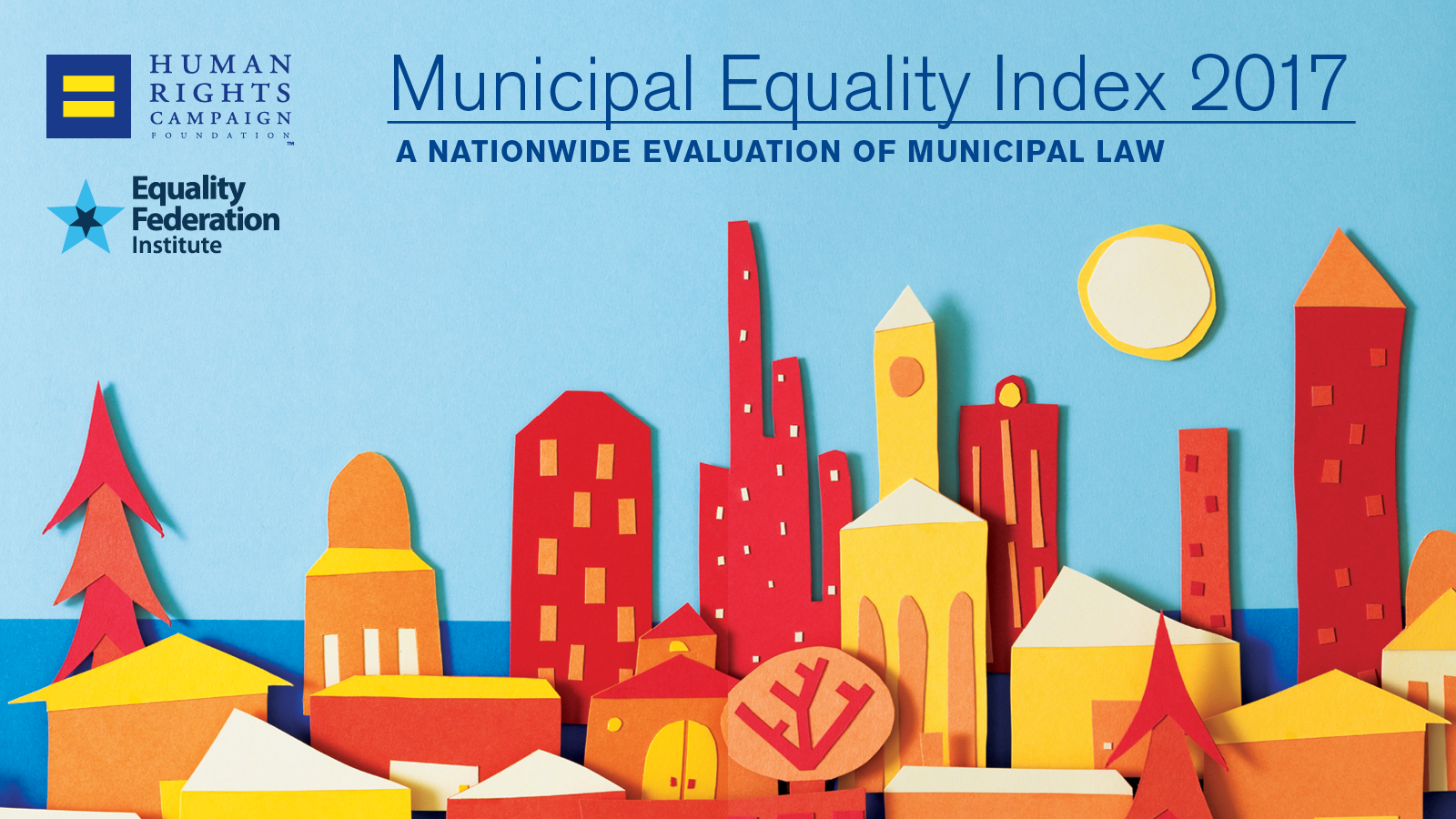 in partnership with the Equality Federation Institute, released its sixth annual Municipal Equality Index (MEI), the only nationwide rating system of LGBTQ inclusion in municipal law, policy and services.

The 2017 MEI reveals new heights in municipal LGBTQ equality in nearly every regard. A record 68 cities earned perfect scores for advancing LGBTQ-inclusive policies and practices -- up from 60 in 2016, 47 in 2015 and 11 in 2012, the first year of the MEI. And in the current political reality, welcoming cities are more important than ever.

“This year’s MEI paints a vivid picture: cities big and small, in red and blue states alike, are continuing our progress toward full equality, regardless of the political drama unfolding in Washington, D.C., and in state legislatures across the country,” said HRC President Chad Griffin. “Today, the MEI serves as a vital tool for business leaders and municipal officials alike when it comes to economic development. CEOs know that in order to attract and retain the best employees, they must grow their companies in places that protect LGBTQ citizens from discrimination and actively open their doors to all communities. The MEI is the best tool to help these businesses make crucial evaluations about the welcoming -- or unwelcoming -- nature of towns and cities across the nation.”

“Our movement is stronger and more united than ever, and we stand in resistance to the unprecedented attacks on all our communities,” said Rebecca Isaacs, Executive Director of the Equality Federation Institute. “This report is a proven, powerful tool for local advocates to leverage in their efforts to win full equality at the local level, and serves as a reminder that we aren’t going back, despite a most hostile federal administration and organized opposition.”

Since the MEI’s debut in 2012, the number of cities earning perfect scores has increased by more than sixfold, and today at least 24 million people live in cities that have more comprehensive, transgender-inclusive non-discrimination laws than their state.

Progress on transgender equality has been particularly noteworthy in cities across America this year, continuing a positive trend that the MEI has tracked -- and encouraged -- since 2012. Transgender-inclusive healthcare benefits are offered to employees of 111 municipalities this year -- up from 86 in 2016, 66 in 2015 and just five in 2012. The MEI’s Issue Brief on Transgender-Inclusive Health Benefits is available here.

Other key findings from the 2017 Municipal Equality Index include:

The MEI rated 506 cities including the 50 state capitals, the 200 largest cities in the United States, the five largest cities or municipalities in each state, the cities home to the state’s two largest public universities, municipalities that have high proportions of same-sex couples and 98 cities selected by HRC and Equality Federation state group members and supporters. It assesses each city on 44 criteria covering citywide nondiscrimination protections, policies for municipal employees, city services, law enforcement, and city leadership’s relationship with the LGBTQ community. Starting in 2018, the MEI will introduce new criteria including protecting youth from “conversion therapy” and will deduct points for religious exemptions that allow discrimination by singling out LGBTQ people.

The full report, including detailed scorecards for every city, as well as a searchable database, is available online at www.hrc.org/mei.