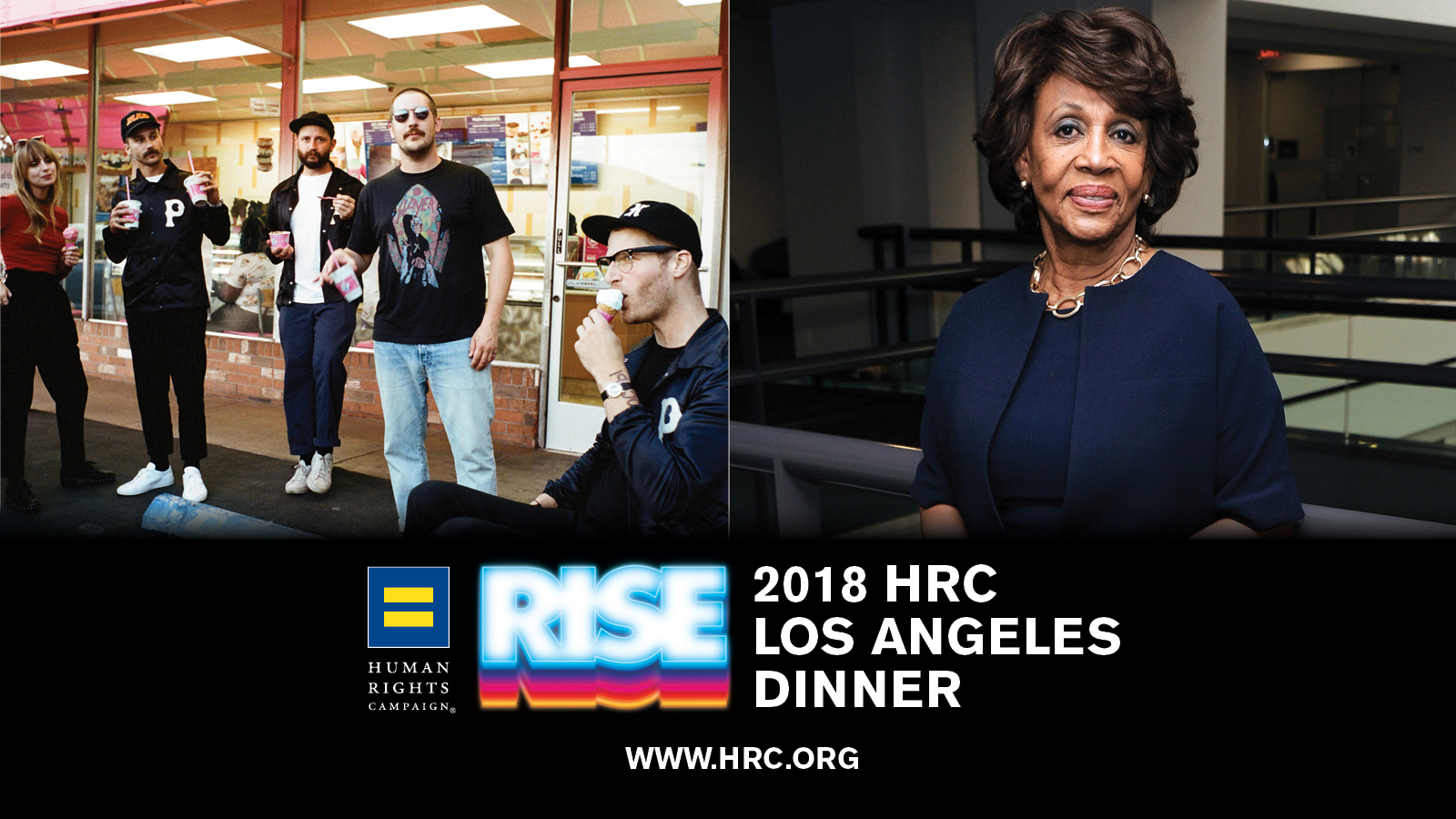 HRC announced that Congresswoman Maxine Waters (D-CA) will speak and the Grammy Award-winning rock band Portugal. The Man will perform at the 2018 HRC Los Angeles Dinner. Set to take place on Saturday, March 10, 2018, at the JW Marriott L.A. LIVE, the event brings together more than 1,000 of HRC’s most active members and supporters in the greater Los Angeles area to raise crucial funds in the fight for LGBTQ equality.

“Maxine Waters is a steadfast defender of equality who is fighting to reclaim the United States from the Trump-Pence agenda of hate, fear, and discrimination,” said HRC President Chad Griffin. “For years, Congresswoman Waters has been standing up for the marginalized and oppressed in our society. We are truly honored to welcome her to the 2018 HRC Los Angeles Dinner.”

Congresswoman Waters is considered by many to be one of the most powerful women in American politics today. She has gained a reputation as a fearless and outspoken advocate for women, children, people of color, and the poor. Elected in November 2016 to her fourteenth term in the U.S. House of Representatives with more than 76 percent of the vote in the 43rd Congressional District of California, Congresswoman Waters represents a large part of South Central Los Angeles, including the communities of Westchester, Playa Del Rey, Watts, and the unincorporated areas of Los Angeles County comprised of Lennox, West Athens, West Carson, Harbor Gateway, and El Camino Village. The 43rd District also includes the diverse cities of Gardena, Hawthorne, Inglewood, Lawndale, Lomita, and Torrance. Congresswoman Waters serves as Ranking Member of the powerful House Financial Services Committee.

“Portugal. The Man is rocking the resistance and using their platform to help make a difference in the lives of LGBTQ people,” said Griffin. “We’re proud to have Portugal. The Man as part of HRC’s Equality Rocks campaign, helping to spark a conversation about love, fairness, and equality across the country, and we look forward to welcoming them to the 2018 HRC Los Angeles Dinner.”

In 2017, Portugal. The Man joined HRC’s Equality Rocks — a public engagement campaign featuring prominent musicians who support LGBTQ equality. In the video for their Grammy-winning single “Feel It Still – which is featured on their eighth studio album, WOODSTOCK – the Portland rockers send a message of resistance to its fans, giving them tools to fight oppression. The interactive video includes 30 Easter eggs with tips on how to resist during the current political climate of the Trump-Pence administration. HRC was featured in one of the eggs, encouraging followers to “stand up for equality.”

“Feel It Still” dominated the charts and radio airwaves in 2017. The multi-platinum certified hit reigned at #1 at nearly all radio formats, including Top 40, as well as Alternative, where the song held the chart’s top spot for a mind-blowing 20 weeks, breaking the record for most weeks at #1. Billboard Magazine even went as far as to call the song, “the unexpected rock crossover hit of 2017,” while Rolling Stone listed it as “one of the best songs of 2017.”