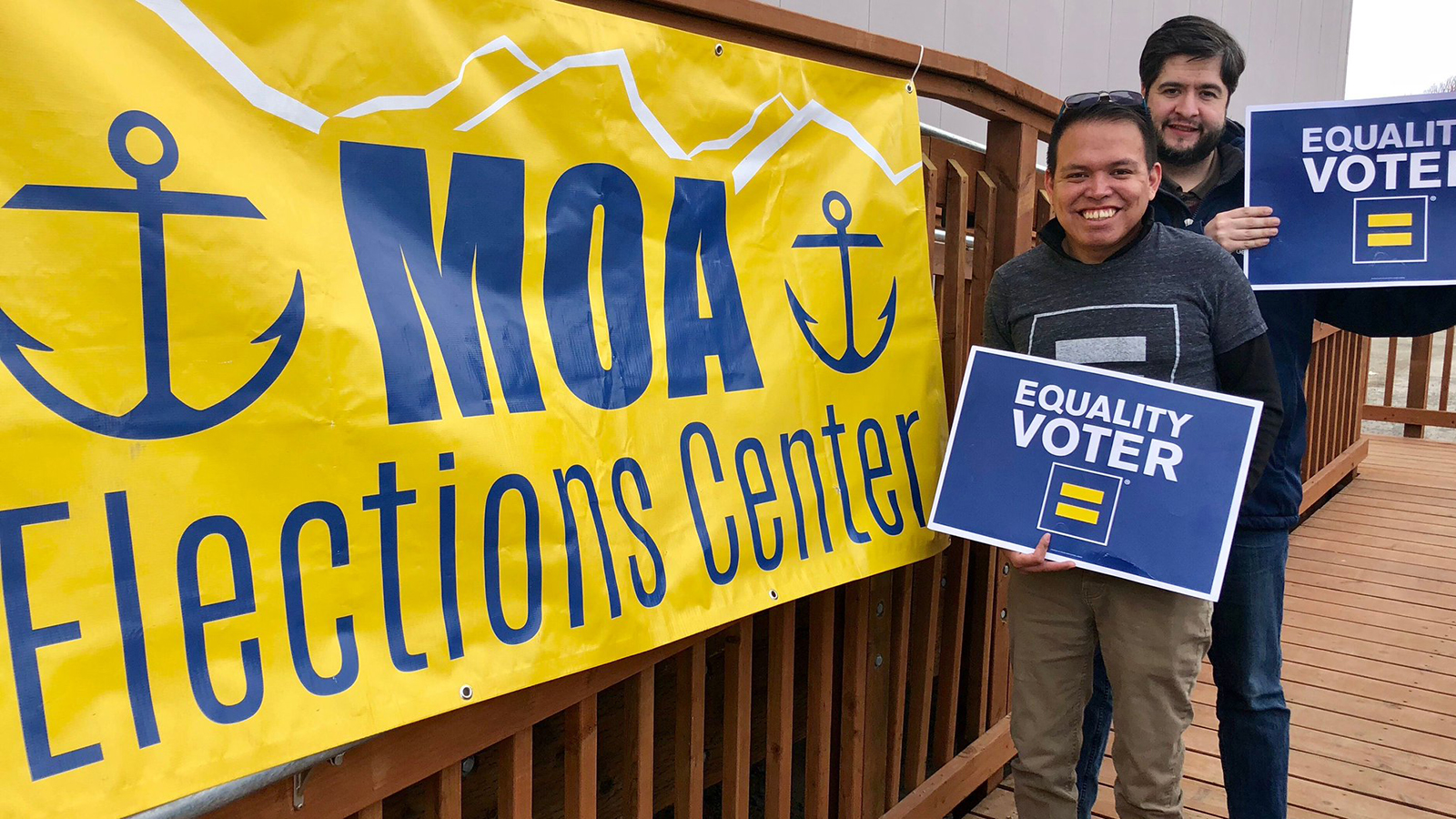 As legislative sessions continue in state capitols across the country, HRC is tracking more than 113 anti-LGBTQ bills and more than 178 pro-equality bills introduced in state legislatures. Twenty-nine legislatures are currently in session.

But we aren’t just on the defense, we’re also working to pass pro-equality bills across the country. With more than 178 pro-LGBTQ bills filed, we are working hard with our local partners to make sure we are gaining ground in our fight for LGBTQ equality.

A recent Washington Post analysis found that despite more than 110 anti-LGBTQ bills introduced across the country, none have passed. In previous years, anti-equality lawmakers in both North Carolina and Texas paid big, and many legislatures are “losing their appetite” to move anti-LGBTQ bills, said HRC State Legislative Director Cathryn Oakley.

Anchorage voters soundly rejected Proposition 1 -- a dangerous ballot measure that sought to eliminate existing municipal non-discrimination protections for transgender people. The ballot measure would have also enshrined discrimination into law by forcing transgender people to use facilities that are inconsistent with their gender identity. HRC served on the executive committee for Fair Anchorage, a coalition that includes local organizations such as the ACLU of Alaska, Planned Parenthood of the Great Northwest and Hawaiian Islands and the Alaskans Together for Equality, Identity and Pride Foundation. HRC worked with Fair Anchorage to uphold the city’s LGBTQ non-discrimination ordinance and had field staff working on the ground with the campaign to mobilize opposition to Proposition 1 and elevate transgender voices and stories in the fight.

BREAKING: In a historic vote, #Anchorage voters refused to succumb to hate and bigotry by voting #NoOnProp1 -- a dangerous, anti-transgender ballot measure crafted to enshrine discrimination into law. https://t.co/2jwuV0qFjI pic.twitter.com/3XcDSl9YC3

Last week, HB 1245, a bill to protect youth from conversion therapy, passed the House. The bill was assigned to the Senate State, Veterans and Military Affairs Committee, where it will have a hearing on April 23. In three previous sessions, this bill has passed the House but not the Senate. This committee is the same body that killed the bill last session on a party line vote of 3-2. Advocates are mobilizing to communicate their support for the bill to committee members. Another bill of interest, HB 1256, will be heard by the Senate Judiciary Committee on April 18.  If passed, HB 1256 would restore funding to the Colorado Civil Rights Division, the department charged with protecting the civil rights of all Coloradans in employment, housing and public accommodations. In February, Republicans on the committee voted to block funding for the crucially important division. In addition to investigating claims of discrimination in Colorado, the body provides training and outreach about non-discrimination laws to the general public, local businesses, community groups and federal agencies. The bill now goes to the Senate.

The Colorado House passed HB18-1245 — a bill to protect #LGBTQ youth in the state from the dangerous practice of “conversion therapy.” We urge the Senate to pass this crucially important bill. https://t.co/bKrw9wqc4c

This week, Hawaii’s House of Representatives passed SB 270,  legislation protecting LGBTQ youth from the dangerous and debunked practice of so-called “conversion therapy.” The version that passed l the House included several amendments, sending it to conference committee before it can move to Governor David Ige’s desk. Last month, Hawaii’s State Senate passed the bill with only one senator voting against the bill.

The Kansas legislature was tentatively scheduled to adjourn on April 6 but, following the passage of a critical school finance bill, it went into recess instead of adjourning. The conference process now continues on HB 2481, a broad adoption bill passed by the Kansas House first as a clean bill, and then by the Senate, which amended it to include an anti-LGBTQ license to discrminate provision. As amended by the Senate, HB 2481 would create a license to discriminate for taxpayer-funded child placement agencies that refuse to place children with LGBTQ foster or adoptive parents, single parents or any parents who don’t meet a contractor’s religious criteria.  In response, the House rejected the changes made by the Senate and the bill was sent to a conference committee. To pass, the bill will either need to be resolved by the conference committee or would face a reconsideration of the House vote not to concur.  The Kansas legislature is scheduled to come back on April 26.

On April 12, LD912, a bill to protect youth from the harmful practice of conversion therapy passed the House with a vote of 76-88. Early last month, the vital legislation passed out of joint committee. The bill is expected to get a Senate floor vote before end of session on April 18.

BREAKING: The Maine House of Representatives passes legislation to protect #LGBTQ youth from the dangerous and discredited practice of so-called “conversion therapy.” https://t.co/NmFdZDzXz7

On April 10, HB 587, a bill to protect youth from conversion therapy, was heard in the Senate Health and Human Services Committee. The committee amended and passed the bill on April 12. HRC Legislative Counsel Xavier Persad testified in support of the bill. The bill previously passed the House in January. HB1319, a transgender non-discrimination bill, passed out of the House to the Senate. In the Senate, it was assigned to the Senate Judiciary Committee and awaits a hearing date, perhaps as early as next week.

On April 11, SB 1140, a license to discriminate in child welfare services bill, passed the House Judiciary Committee as amended. The bill, which had already been passed by the Oklahoma Senate, would make it harder for kids to find foster and adoptive families by allowing taxpayer-funded government contractors to refuse to work with LGBTQ individuals, same-sex families or other qualified prospective parents who don’t meet an contractor’s religious criteria. While the amendment added in committee would reduce the number of children harmed by the bill, the amendment could well be stripped out during floor debate.  Regardless, with or without the amendment, the bill creates a license to discriminate and HRC strongly opposes it in any form. On April 11, HRC President Chad Griffin stood alongside Freedom Oklahoma and other advocates to discuss the harms this bill would cause and to encourage Oklahomans to contact their representatives to voice their opposition SB 1140’s discriminatory measure.

HRC has been working on the ground alongside the Tennessee Equality Project to oppose SB 2480 and HB 2620, two anti-transgender bills that would force the state’s attorney general to either defend or pay for the defense of anti-transgender policies adopted by schools.  Last week, SB 2480 failed in the Senate Judiciary. This week, HB 2620, a bill that had already been taken off notice but then added to the calendar in a bit of procedural trickery, was finally taken off notice for good. The Tennessee legislature is expected to adjourn on April 16.