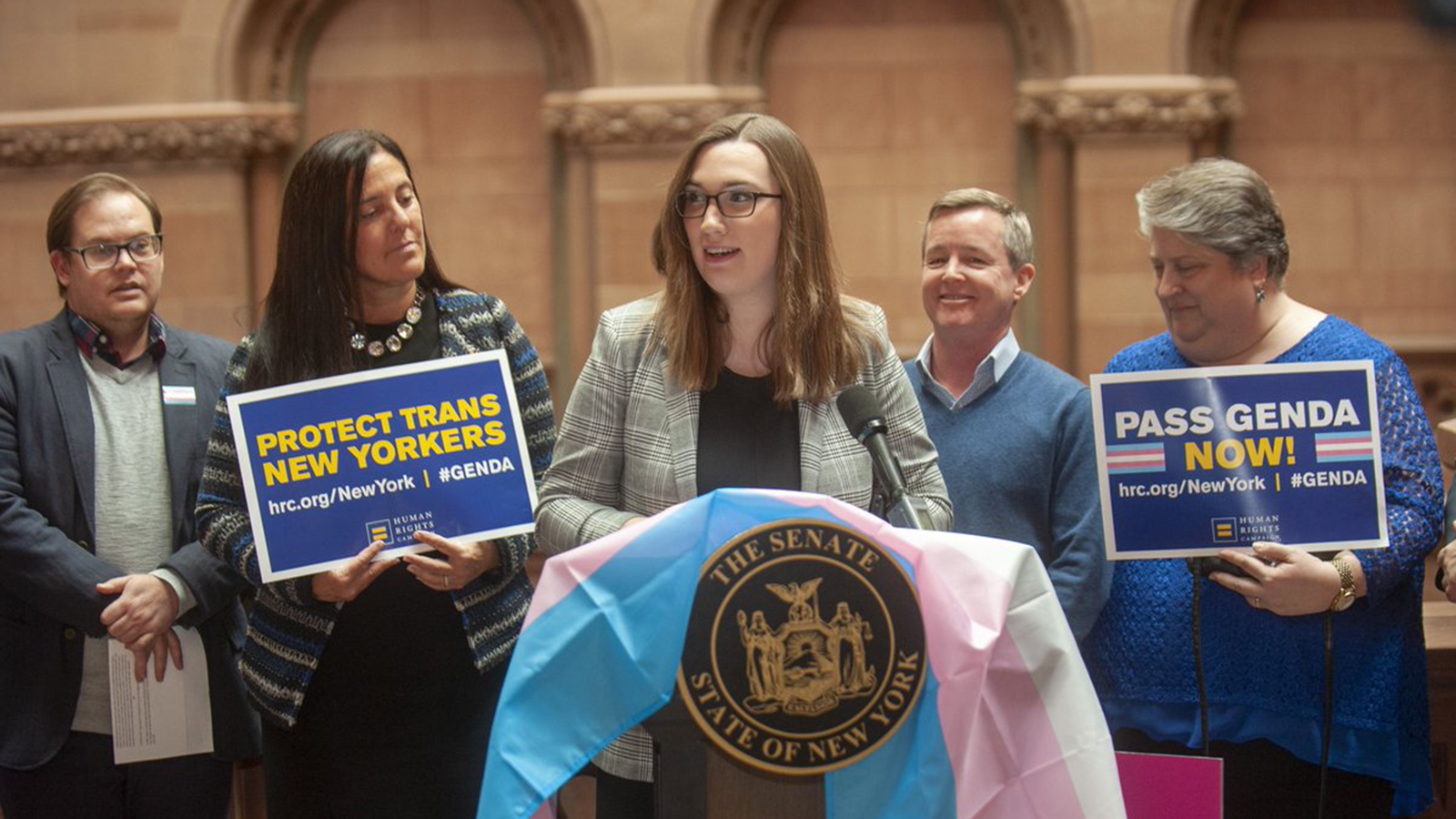 As legislative sessions begin across nearly all 50 states, HRC is tracking more than 150 pieces of LGBTQ-related legislation.

We were proud to mobilize our members and supporters in November to turn out the pro-equality vote for hundreds of HRC-backed candidates, following 18 months of unprecedented engagement and mobilization in more than 70 congressional races and key state-level races in 23 states from coast-to-coast.

Within the first weeks of the 2019 session, the governors of four states signed executive orders prohibiting discrimination on the basis of sexual orientation and gender identity against state employees.

Kansas’ new governor, Laura Kelly, was one of those governors. Last year, then Governor Jeff Colyer signed legislation that discriminated against LGBTQ families. Kansas turned around and made their voices clear on Election Day by electing Kelly.

These historic victories in the past few weeks alone show why pro-equality wins at the ballot box are vital to moving LGBTQ equality forward.

While there remain many dangerous bills in states across the country, here are some other wins we’re celebrating:

The Illinois State House Of Representatives has its first-ever openly gay majority leader. On January 10, the Chicago Sun Times reported that House Speaker Mike Madigan’s credited his decision to name state Rep. Greg Harris House majority leader with Harris’ leadership on issues such as marriage equality, overhauling Medicaid and taking the lead during the budget crisis.

Two vital protections for LGBTQ people headed to New York Governor Andrew Cuomo’s desk on January 15 to be signed. The Gender Expression Non-Discrimination Act (GENDA) will solidify existing law by explicitly adding gender identity and expression to the New York Human Rights Law. The legislature also passed a bill protecting LGBTQ youth in the state from the dangerous and debunked practice of so-called “conversion therapy.” Gov. Cuomo is scheduled to sign these bills this Friday.

Five House members, including HRC-endorsed Reps. Mary González and Julie Johnson, formed the Lone Star State’s first-ever LGBTQ caucus. González, the chair of the caucus, told the Dallas Morning News that “she hopes the caucus will advance bills that are ‘transformative’ for lesbian, gay, bisexual and transgender Texans across the state.”

Equality Virginia and HRC commended the Virginia State Senate for passing legislation that would prohibit discrimination on the basis of sexual orientation or gender identity, and called on the House of Delegates to prioritize these bills this session. The two bills that passed the Senate, SB 1009 and SB 998, would add crucial, common-sense protections against discrimination for LGBTQ Virginians in housing and public-sector employment. Several Republican members of the House of Delegates announced their support for these bills at a press conference last week, but it remains to be seen whether House Speaker Kirk Cox will allow a vote on the House floor.

On January 7, Wisconsin Governor Tony Evers issued an executive order prohibiting discrimination on the basis of sexual orientation and gender identity in state employment and by employers receiving contracts and in grants from the state, and bars LGBTQ discrimination in the provision of state governmental services.

As we celebrate these victories, we continue to prepare to fight back anti-LGBTQ legislation such as South Dakota’s SB 49, a bill targeting transgender student athletes, which is scheduled to be heard by the Senate Education Committee this Thursday.