A Resource Guide to HRC’s Tools for Coming Out 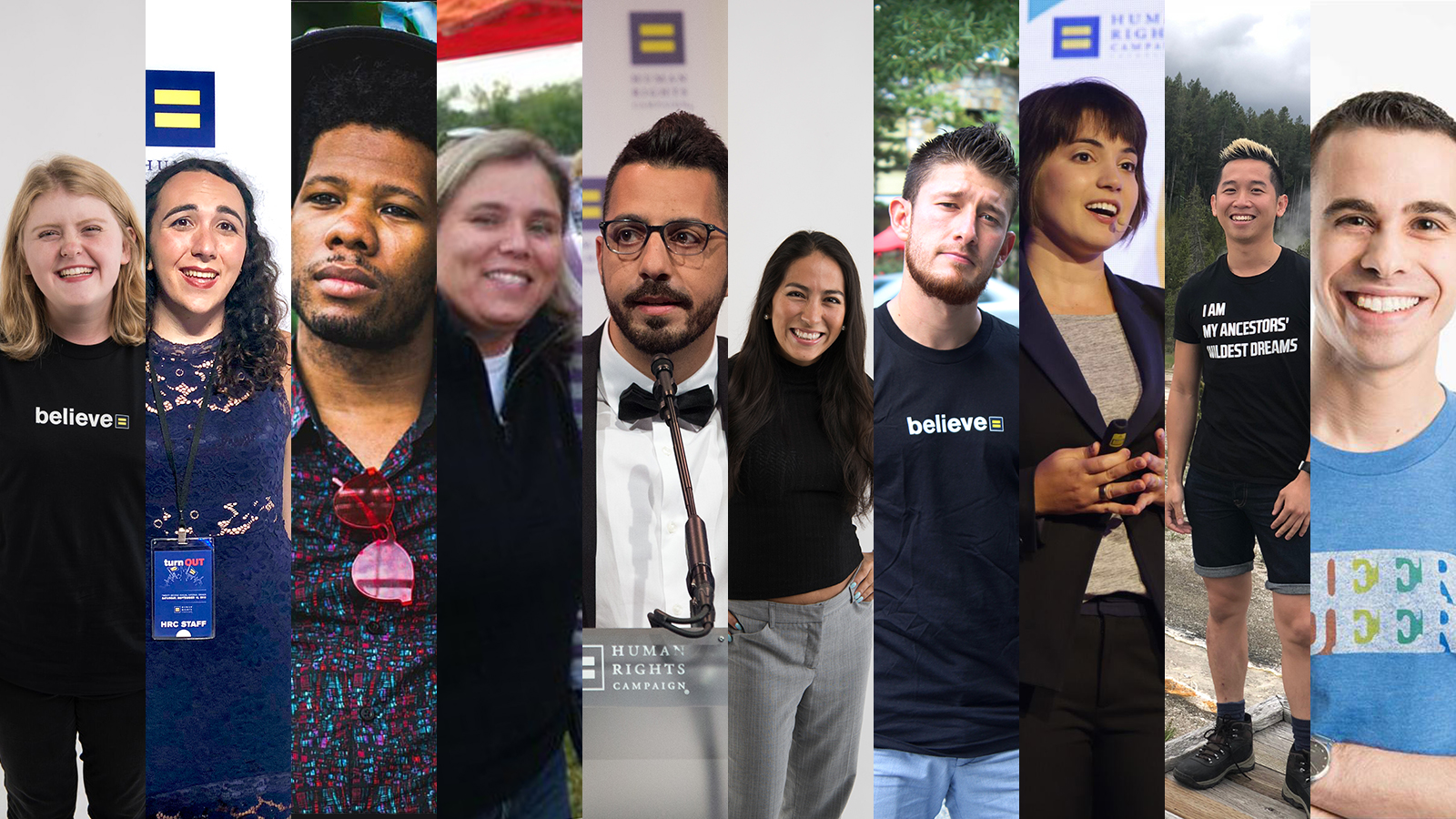 Coming out and living openly aren’t things we do just once. It’s a journey that LGBTQ people  make every single day of our lives. With the Trump-Pence administration’s onslaught of attacks on our community, it’s as important as ever to recognize the power of coming out to ensure that our voices are heard — especially at the polls this November.

Every coming out experience is unique and must be navigated in the way most comfortable for each individual. Whether it's for the first time ever or the first time today, coming out can be hard -- but it’s also a brave and affirming decision to live openly and authentically.

HRC Foundation has more than a dozen resources available to encourage and support individuals in their coming out journey. Our latest guide, Coming Out: Living Authentically as LGBTQ Latinx Americans, was created in partnership with the Hispanic Federation, League of United Latin American Citizens, and UnidosUS to celebrate Latinx Heritage Month.

Check out some reflections from HRC staff, members and supporters about their coming out stories and the myriad of ways our experiences shape what it means to live our truths every day.

A Resource Guide to Coming Out

“The thought of coming out in the South made me feel alone and scared. All of the missing puzzle pieces of my life were coming together, but I felt so much weight on my shoulders. I told my friends first and I felt like a whole new person -- so much support and love. I am grateful.”
—Sandee Loveday, Pronouns: She/Her/Hers

A Resource Guide to Coming Out as Bisexual

“I struggled with coming out as bisexual for a long time. It felt easier to be scared and like I didn't fit in anywhere. I am grateful that I gave myself a little room to grow into not only being comfortable, but celebrated for my queerness through coming out.”
—Shannon McDermott, Pronouns: She/Her/Hers

Transgender Visibility: A Guide to Being You

"As a trans and queer woman, I've come out to friends and family three times: first as queer, then as trans, and then as queer again. But coming out is not just a one-time thing -- I'm constantly coming out... it gives me power over my identity, and I hope my visibility helps to influence hearts and minds about trans folks.”
—Katalina Hadfield, Pronouns: She/Her/Hers

A Resource Guide to Coming Out for African Americans

“Coming out for me was a learning experience. I was surrounded with great friends and, though it took some time, a supportive family. Knowing African American history was very important to my Black identity growing up, and I applied the same to learning LGBTQ history. Learning about Stonewall and the history of queer people of color taught me to live freely in my skin.”
—Justin Smart, Pronouns: He/Him/His

“As an immigrant and a child of refugees, I am required to juggle a collectivist principle fostered by my ancestors and a Western construct of individuality -- with both further complicated by my queer identity. Among mediating intergenerational conflicts while resolving one's self-actualization issues, queer APIs must also confront a two-front battle to navigating stigma and acceptance in their respective LGBTQ and API communities. We must recognize that the LGBTQ and API narrative is not monolithic, linear or cohesive -- it’s ongoing as we all strive to uphold and coexist with the many parts of our identities.”
—Viet Tran, Pronouns: He/Him/His

“I came out in 2001 in El Paso, Texas, at a time when it was impossible to find queer Brown role models. I cannot imagine what my life would have been like if I had seen folks in the media who made me feel like my experiences were normal and okay. With the daily assault on our bodies and minds, it is more important than ever to speak our own truth to power and shine a light for others.”
—Nathan Barrera-Bunch, Pronouns: He/Him/His

Coming Out as a Supporter

"Supporting LGBTQ rights is a unique opportunity that helps allies like me to better understand the challenges faced by the community. While some people may not fully understand the importance of coming out as an ally, it is critical to remember that equality is not a privilege of some, but rather a human right that everyone should be able to exercise.”
—Milagros Chirinos, Pronouns: She, Her, Hers

Coming Out at Work

“Our decade of research shows that roughly half of all LGBTQ workers feel compelled to not be open about who they are when on the job. That’s a reflection of real concerns and messages of exclusion they receive. For those assessing whether or not to be openly LGBTQ in the workplace, we have these resources.”

“Coming out in religious communities can be a difficult journey.  Wherever you may be in that journey, the greatest wisdom you possess in knowing God is to know and love yourself. And the steps you take to be more fully open in your religious community will only deepen your own faith and strengthen your community.”
—Michael Toumayan, Pronouns: He/Him/His

“For LGBTQ Catholics, coming out is often an intensely spiritual experience, responding to the immense love that God bestows on all people, everywhere. Catholicism affirms that all of our major life transitions are opportunities for God to give us grace. Although the institutional Catholic Church does not yet recognize it, coming out as LGBTQ is also a sacrament, a moment where we embrace the true and holy way that God made us.”
—Francis DeBernardo, Pronouns: He/Him/His

Coming Home to Evangelicalism and to Self

"When I came out, I found a vast community of LGBTQ Christians who fought hard to reclaim their place at the table of grace, and quickly realized that they often embody the good news of Jesus better than most. Now, as a gay Christian pastor, I have the joy of standing at the communion table every week and declaring this good news: God welcomes you just as you are, because of who you are, to come and receive grace and love."
—Rev. Brandan Robertson, Pronouns: He/Him/His

Coming Home to Islam and to Self

“Even though many Muslims may not share my conservative religious upbringing, I've witnessed amazing acceptance within millennial Muslim communities. Nobody should have to choose between their faith and who they love. I hope LGBTQ Muslims know they're not alone and that pride, whether out loud or still in silence, is wonderful. I hope continuing to spread this message will allow more LGBTQ visibility within Muslim communities, because we're here, and we matter.”
—Rokia Hassanein, Pronouns: She/Her/Hers

Coming Home to Judaism and to Self

“Growing up attending a Conservative Jewish Day School that rarely acknowledged LGBTQ people, I thought being gay was antithetical to my Jewish identity. It was only when I came out in college and got involved in Tufts Hillel that I realized that my queer identity wasn’t in conflict with my Judaism -- it complemented it. I consider my work at HRC a way of practicing my Judaism and fulfilling our obligation l’taken et ha-olam, to repair the world.”
—Jordan Dashow, Pronouns: He/Him/His

Coming Home to Mormonism and to Self

“Being a Latter-day Saint to me means trusting that I can turn to God for the answers to life's most difficult questions. It means that my soul and all its constituent parts (my body, my gender, my sexuality) and the relationships I embrace and create -- all of these matter, eternally. To be a Latter-day Saint means to embrace queerness, to commit to know myself and, in the process, to know the Spirit, Christ and God. As a queer man, I wouldn't choose to be anything else.”
—John Gustav-Wrathall, Pronouns: He/Him/His