The discriminatory "Don't Ask, Don't Tell" ban on gay and lesbian service members is officially in the dustbin of history. For 17 years, the law prohibited qualified gay and lesbian Americans from serving in the armed forces and sent a message that discrimination was acceptable.

A new chapter now begins for the nation's military. Gay and lesbian service members previously discharged under DADT have the opportunity to re-enlist. Gay and lesbian Americans eager to serve the country but not willing to compromise who they are as individuals will, for the first time ever, be able to openly join. And brave men and women currently serving will have the freedom to come out and be honest with their comrades about who they are and who they love.

HRC members and supporters played a critical role in getting us here. You sent over 625,000 e-mails to your members of Congress urging them to support repeal. You helped us gather nearly 50,000 handwritten pro-repeal messages for delivery to Capitol Hill. And you supported our efforts in states across the country, lobbying your elected officials and engaging with the 20,000 veterans HRC mobilized to speak out in favor of repeal. 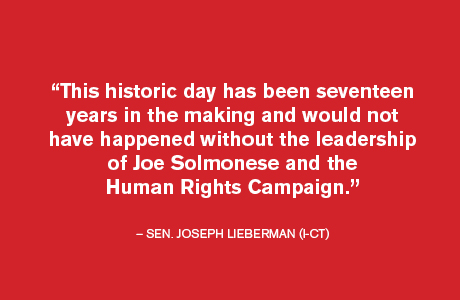 Where We Go From Here

Despite this milestone, there is important work to ensure meaningful implementation of repeal and full equality for gay and lesbian service members.There are several actions that are crucial to continuing down the path of full equality: