Queer Midrash is a compilation of prose and poetry, commentary and reflection, prayer and narrative retelling inspired from and based on texts sacred to the Jewish community written through a Queer lens.

Honoring the millennia long tradition of Midrash, Queer Midrash is a resource for LGBTQ Jews to be affirmed and supported in their faith journeys, while equipping allies and curious seekers to explore the possibilities of an LGBTQ affirming Judaism.

Reading the Story of Hannah through Queer Eyes

The Haftarah reading for the first morning of Rosh Hashanah tells the story of Hannah. She is desperate to bear a child. Married to Elkanah, she is one of two wives to this man. Her sister - wife, Peninah had two children already. For Elkanah, whose name means “God creates” the pain of Hannah’s infertility was almost too great to bear even though she was the favored wife. Peninah cruelly taunted and bullied Hannah, to the point of tears and anger. Hannah is besides herself. She refuses to eat and drink at festive times which were family times. Her husband Elkanah sees her but doesn’t really get what’s going on. Elkanah asks her about her tears but in truth he is blind to her rage, sadness and bitterness. He can’t understand her longing to be a mother. He can’t understand why he isn’t enough for her as if it is a contest. Elkanah, thinking his words are words of comfort, asks Hannah, “Why do you cry and why do you not eat and why are you disheartened? Am I not worth more to you than ten sons?”. Yet, Hannah’s rage bottled inside, and is turned on herself when she won’t participate in the festival, excluding herself from the family and communal observances.

Hannah’s hurt and rage are eventually channeled into a faithful prayer at the ancient temple in Shiloh when the family makes a holy day pilgrimage. There, she takes matters into her own hands and offers her own prayer. Ironically, the high priest Eli, still doesn’t really see Hannah engaging her truth and instead accuses her of being drunk when she prays with fervor, her lips moving in silent prayer. But Hannah corrects him and tells him her truth, that she is not drunk but praying because she longs to be a mother. Eli hears her truth, honors it and blesses her and asks God to fulfill her prayers.

Hannah’s prayer for a child is fulfilled and she gives birth to Samuel who will become a leader of the Israelites, and he indeed is someone who will not only be seen but heard.

As far as we know, none of the people mentioned in this Biblical story in the First Book of Samuel are queer. We know nothing about their sexual orientation or gender identity. And yet there is a very important queer message.

When Hannah finally told her truth it was then her prayers were answered.

She was bullied by a family member for a perceived lack. Her pain and anger was invisible even to those who loved her. Her hurt and rage was misread by those in power. Only when she spoke her truth, at great risk to herself and her family, was she seen and heard not only by the priest, Eli but by God as well.

God sees our truth and honors it.

This inspiring story should help all of us who keep the pain of bullying inside, and hide our truth from ourselves and the world. This inspiring story should remind all of us who feel trapped to speak our truths and release the rage and hurt we have inside. We have agency and the right to self determination, even if others tell us we do not. God will see and hear our prayer, and honor our truths. This is one of the central messages of the New Year. If we live our truths, and seek God sincerely, not only will God see and honor us but we will be able to see and honor ourselves.

And God took notice of Sarah as God had said and God did for Sarah that which had been promised.

Sarah conceived and gave birth to a son of Avraham at the time of which God had spoken.

Rabbi Ami’s idea, offered in a discussion of how God treasures the prayers of the righteous, raises a wonderous possibility. Sarah and Avraham, the parents of the Jewish people might have spent most of the years in a same-gender marriage.

What is a tumtum? Tumtum is the name by which the rabbis of the Talmud designated someone whom today we might call intersex or non-binary, someone whose body is not read obviously as male or Female. Rabbi Ami suggested that, because God “desires the prayers of the righteous,” these people were led to one another so that they would pray for their bodies to be altered such that they could make a baby together, a prayer that was unanswered until they had each reached old age.

What does the Oral Torah tell us about tumtumim? Bekhorot 42b offers a Baraita (teaching from the Mishnaic era, having the validity of a Mishnah) to teach, דתניא טומטום שקידש קדושיו קדושין נתקדש קדושיו קדושין : If a tumtum betroths a woman, the betrothal is holy and valid, and if a tumtum is betrothed by a man, the betrothal is holy and valid. Tumtumim are people whose gender is fluid enough to be determined through relationship.

So, it could be said that, according to Rabbi Ami, what Sarah and Avraham had for years was a kind of Schrödinger’s marriage. Their gender was considered uncertain for rabbinic legal purposes. Each could be either a man or a woman or a person with aspects of both of those genders; each could marry legally with a man or a woman. And, in that liminal, uncertain state, they were married to one another and considered by the Holy One of Blessing to be so righteous, so holy, that they were brought together so that God could savor their prayers and grant them the miracle of childbirth in old age, making them the progenitors of the Jewish people.

A word choice in Yevamot 64a heightens the tension created by this possibility. “God desires the prayers of the righteous,” that is: שהקב"ה מתאוה לתפלתן של צדיקים, God mtaveh such prayers—God lusts for, yearns for those entreaties. Although they have different Hebrew roots, taev, lustful longing is only one Hebrew letter away from, and sounds very similar to, toevah, the word that, in the traditional Yom Kippur afternoon reading characterizes what is usually translated as men having sex “as a man lies with a woman”—although these days, that is a contested translation! Whatever activity that passage refers to is called a toevah, a forbidden appetite.

So we are told that God has a lust for the prayers of the righteous, a lust that borders on the excessive, even the forbidden--a desire that could be satisfied through the prayers of two people who lived on the margins of gender, whose taev for one another skated on the border of toevah. Who could give birth to a people of ivrim, the ones who cross over, who overflow borders and bring new kinds of holiness into the world.

In partnership with Keshet 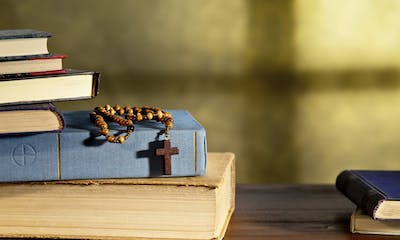 What Does the Bible Say About Homosexuality?