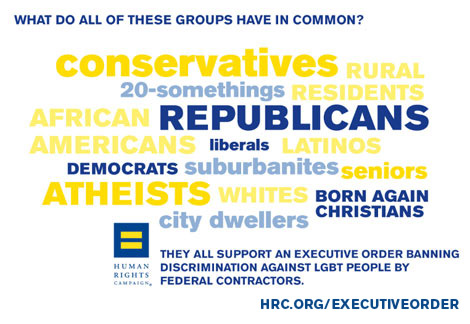 It’s not often that an issue is supported by everyone from born again Christians to liberals to rural residents to Catholics. It goes to show the tremendous popularity of a common-sense Executive Order that would ban discrimination by federal contractors on the basis of sexual orientation or gender identity.

A 2011 poll put out by HRC shows overwhelming support for this kind of executive order.  73 percent of 2012 likely voters favor such an order and support remains strong regardless of age, race, education, political ideology, and a number of other demographics.

When asked: “As you may know, under current federal law and in many states, gay, lesbian, bisexual and transgender people are NOT protected from discrimination in the work place. Would you support or oppose a policy that required companies that do business with the federal government to not discriminate against gay, lesbian, bisexual or transgender people in employment?” 73 percent said they supported the policy, 9 percent opposed the policy and 9 percent were unsure.

One striking result of the poll is the strength of support for an Executive Order (EO) across usually divergent demographic groups:

The poll also showed voters are unaware that current federal law does not prohibit discrimination on the basis of sexual orientation with 87 percent believing that kind of discrimination to be illegal and only 5 percent correctly knowing that it remains legal.

Policies of non-discrimination are among the best practices of Corporate America. HRC’s 2014 Corporate Equality Index reveals 91 percent of Fortune 500 companies have their own policies against sexual orientation non-discrimination and 61 percent cover gender identity. When the CEI survey began in 2002, 61 percent had sexual orientation policies and only three percent covered gender identity.

Under a standing Executive Order from the Johnson administration, government contractors are barred from discriminating on the basis of race, color, religion, sex or national origin.  HRC first proposed that the administration add sexual orientation and gender identity to that list in our “Blueprint for Positive Change” – a series of policy recommendations we presented to the Obama administration shortly after the election in November 2008.  As part of a coalition advocating for this order, HRC has met with officials across the administration including at the White House to advocate the President take this important step.

The national survey of 800 likely voters was conducted for HRC by Greenberg Quinlan Rosner Research from November 9 – 13, 2011.  It has a margin of error of +/- 3.46 percentage points.