Washington– The Human Rights Campaign – the nation’s largest lesbian, gay, bisexual and transgender (LGBT) civil rights organization – today announced a growing partnership with Macy’s. The retailer will feature HRC merchandise in its Boston Downtown, Columbus Easton, Los Angeles Beverly Center, Macy’s Minneapolis, Saint Louis West County, and San Francisco Union Square stores throughout the month of June, which is LGBT Pride month.  Featured merchandise will include a “Vote Equality” t-shirt, which will be displayed prominently in stores during this election year. One hundred percent of proceeds from the partnership will go to HRC’s fight for LGBT equality.

“Partnering with Macy’s during LGBT Pride month gives us the opportunity to spread the message of equality to a large audience during a critically important election year,” said Don Kiser, HRC’s creative director who manages HRC’s Action Centers and Stores. “For years Macy’s has shown a commitment to diversity and equality and we are proud to partner with them in the fight for fairness.”

“Macy’s is proud to recognize and honor our LGBT employees and customers during Pride Month with our nationwide Pride + Joy campaign. These festive celebrations and community initiatives showcase our steadfast commitment to inclusiveness in all aspects of our business,” said William Hawthorne, senior vice president, diversity strategies and legal affairs. “During Pride Month and throughout the year, we will remain committed to supporting the LGBT community through a variety of initiatives including our long-standing partnership with the Human Rights Campaign.”

Macy’s is one of HRC's National Corporate Partners and has consistently rated highly on the HRC Foundation’s Corporate Equality Index, the national standard in evaluating policies, practices and diversity efforts relating to LGBT workers. The Index considers non-discrimination policies, benefits, diversity training and other internal resources for LGBT workers, as well as external support for LGBT consumers and job seekers.

Download high resolution images by clicking on the images below. 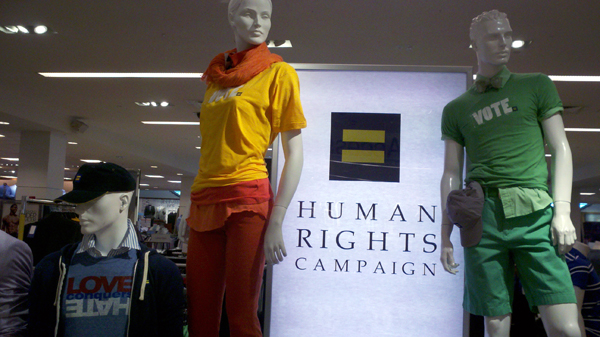 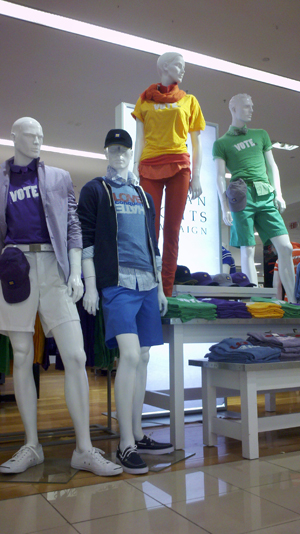 The Human Rights Campaign is America's largest civil rights organization working to achieve lesbian, gay, bisexual and transgender equality. By inspiring and engaging all Americans, HRC strives to end discrimination against LGBT citizens and realize a nation that achieves fundamental fairness and equality for all.

Macy's, the largest retail brand of Macy's, Inc. (NYSE:M), delivers fashion and affordable luxury to customers at more than 800 locations in 45 states, the District of Columbia, Puerto Rico and Guam. Macy's stores and macys.com offer distinctive assortments including the most desired family of exclusive and fashion brands for him, her and home. Macy's is known for such epic events as Macy's 4th of July Fireworks(R) and the Macy's Thanksgiving Day Parade(R), as well as spectacular fashion shows, culinary events, flower shows and celebrity appearances. Building on a 150-year tradition, Macy's helps strengthen communities by supporting local and national charities that make a difference in the lives of our customers. For Macy's media materials, images and contacts, please visit our online pressroom at www.macys.com/pressroom.