In its fourth year, the premier event addresses safety, inclusion and well-being for LGBTQ youth, and brings together youth-serving professionals to discuss best practices for working with and caring for LGBTQ youth and their families in schools, community centers, healthcare settings, and beyond. The annual event is held in partnership with the American Counseling Association and the National Education Association, with AT&T and Toyota as presenting sponsors.

During the closing plenary, conference attendees were treated to a surprise performance of “Ring of Keys” by Fun Home’s Alessandra Baldacchino. Fun Home is a musical adaption of a graphic novel of the same name that tells character Alison Bechdel's story of coming to an understanding of her own sexuality while navigating her relationship with her gay father.

I had an incredible time today performing Ring Of Keys at the #TimeToTHRIVE @HRC event. Thank you for inviting me. It was so inspiring! �� pic.twitter.com/wtHjp1hSeF

HRC Youth Ambassador, transgender youth activist and star of TLC’s I Am Jazz, Jazz Jennings was presented with the final Upstander Award of the weekend. HRC Parents for Transgender Equality Council members Debi Jackson and Jodie Patterson presented Jazz with the award.

Attendees also heard from featured speakers Dolores Huerta, civil rights hero and President of the Dolores Huerta Foundation; and Pam Iorio, President and CEO of Big Brothers Big Sisters of America. They were also introduced to the Class of 2017 HRC Youth Ambassadors as HRC’s Sarah McBride closed the program.

Honored to speak at the #TimeToTHRIVE @BBBSA in support of mentoring LGBTQ youth! pic.twitter.com/obTPdb17I9 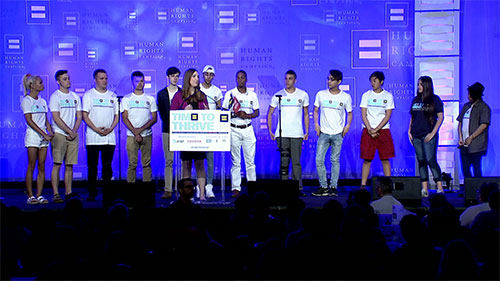 To learn more, visit TimeToTHRIVE.org, and watch more videos on HRC’s YouTube channel. Miss any of the action? Read more about day one and day two of Time to THRIVE.

Time to THRIVE is the premier national convening of educators and youth-serving professionals to build awareness and cultural competency, learn current and emerging best practices and gather resources from leading experts and national organizations in the field. Time to THRIVE took place April 28-30, 2017 at the Washington Marriott Wardman Park in Washington, D.C.

Amazing weekend with @HRC at #TimetoThrive! Lots of new ideas to make sure our schools are safe & supportive for every kid. pic.twitter.com/RwbPs1Yv2J

Having the ultimate #MamaBear moment with my new "kids"- the @HRC Youth Ambassadors! Love these amazing young leaders!! #TimeToThrive pic.twitter.com/n11hbtg9ki