WRONG SIDE OF HISTORY -- NC LAWMAKERS AND GOVERNOR COOPER SELL OUT LGBTQ COMMUNITY WITH DISCRIMINATORY HB2.0: In a shocking betrayal of the LGBTQ community, North Carolina Gov. Roy Cooper yesterday signed into law a measure he falsely and touted as a “repeal” of the discriminatory HB2. In fact, the new law enshrines deep, harmful and unconstitutional anti-LGBTQ discrimination into state law. His action drew a swift and angry rebuke from civil rights advocates across the nation. “After more than a year of inaction, Gov. Cooper and North Carolina lawmakers doubled-down on discrimination,” said HRC President Chad Griffin. “This new law does not repeal HB2. Instead, it institutes a statewide prohibition on equality by banning non-discrimination protections across North Carolina and fuels the flames of anti-transgender hate. Gov. Cooper and each and every lawmaker who supported this bill has betrayed the LGBTQ community. HRC will explore every legal action to combat this dangerous legislation, and we urge all businesses, sports leagues and entertainers who have fought against HB2 to continue standing strong with the LGBTQ community attacked by this hateful law.” The law bans LGBTQ non-discrimination protections statewide through 2020 and permanently bars cities from passing laws that ensure transgender people can access restroom and similar facilities in accordance with their identity. More from HRC.

It ain't over until the LGBT community and the ACLU say it's over. https://t.co/kiZlCFeDVb

CIVIL RIGHTS LEADERS CALL ON NCAA TO #StayStrong AND OPPOSE SHAMEFUL HB2.0: In advance of a decision expected within days by the NCAA Board of Directors on whether to allow tournament events to be held in North Carolina, the North Carolina NAACP, HRC, Equality North Carolina, the National Center for Transgender Equality (NCTE), and the Freedom Center for Social Justice, issued this joint statement after Cooper signed the egregious new legislation: “We call on the NCAA to oppose this shameful HB2.0 bill in North Carolina, and not to reward lawmakers who have passed this so-called ‘deal’ which is an affront to the values we all hold. This bill is anti-worker, anti-access to the courts, and anti-LGBTQ. It violates all basic principles of diversity, inclusion and basic civil rights. Fundamentally, any moratorium on civil rights is not a compromise, it is a contradiction with the principle of equal protection under the law and our moral values.” More from HRC.

This #HB2 "repeal" violates all basic principles of diversity, inclusion, and civil rights. It is not a compromise. 1/3

It is a contradiction of the @NCAA’s pledge to protect the safety and well-being of their #LGBTQ community. 2/3

“DEATH BY 1000 CUTS” -- TRUMP ADMINISTRATION’S CONTINUED ATTACKS ON LGBTQ EQUALITY: In a new piece from The Guardian, reporter Sabrina Siddiqui (@SabrinaSiddiqui) catalogs the ways the Trump Administration has undermined LGBTQ equality since he took office -- including  excluding “sexual orientation” and “gender identity” as proposed topics for inclusion in the American Community Survey, overseen by the U.S. Census Bureau . Trump this week also signed a law overturning regulations on an Obama-era executive order requiring the Office for Contract Compliance Programs (OFCCP) to consider potential government contractors prior compliance  with federal anti-discrimination laws prior to awarding a contract -- action that HRC Government Affairs Director David Stacy says, “signals that the administration could continue to repeal Obama-era policies aimed at protecting LGBTQ people.” Further evidence that Trump is no friend of the LGBTQ community:

More from The Guardian.

TODAY -- TRANSGENDER DAY OF VISIBILITY: Today we join in celebrating the transgender community and to help raise awareness of the struggles they face. HRC is using this week to highlight trans youth making a difference, to praise workplaces supporting transgender employees and to mourn the loss of the transgender people -- mostly transgender women of color -- murdered in an epidemic of violence we must end. More from HRC. 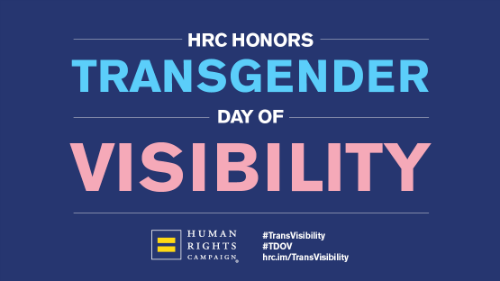 1 IN 5 MILLENNIALS IDENTIFY AS LGBTQ, SAYS NEW GLAAD STUDY: Results from the study, conducted in November, has found that 20 percent of 18-to-34 year olds identify as LGBTQ. More from The Huffington Post.

THERE’S A HEFTY PRICE TAG ON ANTI-LGBTQ DISCRIMINATION IN INDONESIA -- $12B A YEAR: A recent study from The Williams Institute found that the potential economic loss from anti-LGBTQ discrimination in Indonesia could be as high as $12 billion annually. More from Fortune.

THANK YOU FOR LIVING YOUR TRUTH, PATRICIA: Patricia Davies, a World War II British Army veteran, came out as transgender at the age of 90 -- proving that it is never too late to live openly and happily. More from NewNowNext

READING RAINBOW: The New York Times describes nine LGBTQ comic heroes who are not yet openly LGBTQ in their movie series; Advocate shares photos from ClexaCon, a media convention for LGBTQ women; BuzzFeed reports a viral hashtag in support of the bisexual community;