HRC launches hub for Spanish-language resources; Pulling US from UNHRC could endanger lives around the globe.

RECURSOS EN ESPAÑOL -- HRC LAUNCHES HUB FOR SPANISH-LANGUAGE RESOURCES: Today, HRC launched Recursos en Español de HRC, to expand outreach and resources for Spanish-speakers and Spanish-language media. HRC’s top resources will now be available in Spanish, including guides, videos and blog posts highlighting the experiences and unique challenges of members of the Latinx LGBTQ community. “The LGBTQ community is as diverse as the fabric of our nation,” said HRC President Chad Griffin (@ChadHGriffin). “HRC en Español ensures that our groundbreaking and lifesaving resources are available and accessible to the millions across this country who belong to Spanish-speaking communities. With the Latinx community facing unprecedented political attacks, now more than ever, HRC stands with all LGBTQ Latinx people in all that we do.” Recursos en Español de HRC includes original content and resources reflecting the broad range of experiences and needs within the Latinx LGBTQ community and provides support to those working to build inclusive spaces within the Latinx communities in the U.S. and around the globe. More from HRC: English and Spanish. 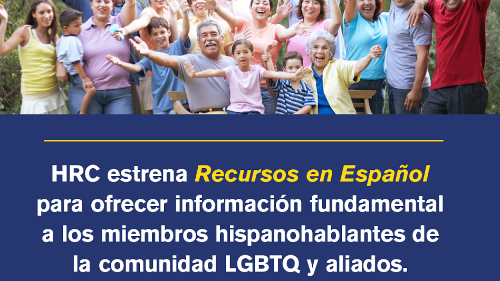 PULLING U.S. FROM U.N. HUMAN RIGHTS COUNCIL COULD ENDANGER LIVES AROUND THE GLOBE: HRC expressed concern about reports that the Trump administration may withdraw the United States from the United Nations Human Rights Council (UNHRC), which has taken historic steps to protect and promote the human rights and dignity of LGBTQ people around the globe. News of the threat comes amid scores of human rights crises around the globe, including the persecution and torture of LGBTQ people by the Chechen government, ISIS and other regimes worldwide. “Consider the message the United States would send to the world if it were to disengage from the UN Human Rights Council,” said Ty Cobb, Director of HRC Global. “U.S. foreign policy must protect and promote human rights. Turning away from the Council would signal to brutal regimes — and all those they oppress — that the U.S. is looking the other way. Without U.S. leadership, despotic leaders will be emboldened to control the agenda and push their own dangerous goals.” Last month, HRC submitted written testimony to the U.S. Senate Committee on Foreign Relations in support of the UNHRC. More from HRC.

TUESDAY TWEET -- NIGERIAN WRITER ABDUCTED FOR PRO-EQUALITY ESSAY RELEASED: Chibụìhè Obi was kidnapped and his life threatened June 1 after publishing an essay, “We’re Queer, We’re Here,” that addressed anti-LGBTQ violence in the country. Bisi Alimi (@bisialimi), a Nigerian LGBTQ advocate says that this is unfortunately one in a series of similar events. More from BuzzFeed.

The latest update on Mr Obi is that, he has been released & returned to his family. On behalf of the LGBT comm in Nigeria, we say thank you.

● Cameroonian singer and model Irene Major has launched a campaign to raise awareness about anti-LGBTQ abuse in Africa. More from The Huffington Post.

THE WASH POST PROFILES REP. SCOTT TAYLOR, R-VA, NEWEST CO-SPONSOR OF EQUALITY ACT:  Taylor, the second House Republican to support a comprehensive federal ban on LGBTQ discrimination, is also a “foreign policy hawk and supports President Trump,” Jenna Portnoy (@JennaPortnoy) writes. But the former Navy Seal “understood right away that this was the right thing to do,” David Stacy, HRC’s Director of Government Affairs, told Portnoy. “It was broadly supported across the state and in his district.” Taylor’s district, which includes Virginia Beach, is a vacation spot for LGBTQ people, the Post reports. Read more at The Washington Post.

THIS WEEK IN ‘HUH?’ -- FORMER WORLD CHAMP CLAIMS LESBIANS OUT TO RECRUIT WITH TENNIS: While speaking to Christian Vision Radio, former world tennis champion Margaret Court of Australia claimed that the sport is “full of lesbians” and that Australia’s recent efforts to combat anti-LGBTQ bullying in schools are part of the “gay lobby.” What a bunch of racket (badum-tiss!) More from The Guardian.

● Tennis legend John McEnroe has the perfect response: Signaling his support for marriage equality in Australia, McEnroe slammed Court for her anti-LGBTQ comments, and offered up a fab idea -- it involves Elton John. Check it out in his hilarious video for Eurosport.

NEW APP FOR LGBTQ CHRISTIANS: After struggling to reconcile her gay and Christian identities, Crystal Cheatham is creating an app featuring devotionals, meditations, articles and podcasts for LGBTQ Christians. More from PBS.

EXTREMISTS LOOKING TO EXPORT HATE TO CUBA: With a renewed relationship between the U.S. and Cuba, some U.S.-based fundamentalists are looking to export their hateful agenda to a country where fledgling progress on LGBTQ issues has already been slow. More from Philadelphia Gay News.

Mashable talks to the creator of an app that helps the LGBTQ community find resources including LGBTQ-friendly hospitals and shelters; NPR speaks to a lesbian mother seeking to understand her gender-nonconforming child; The Associated Press shares Madrid’s LGBTQ-inclusive traffic signals in honor of the 2017 World Pride celebration; Reuters highlights one Massachusetts nonprofits’ vision of adding LGBTQ history to school curriculums; BuzzFeed interviews Valentina Sampaio, the first transgender model to appear on the cover of Vogue