THE VOTE TO REPEAL THE ACA IS DELAYED -- KEEP THE PRESSURE ON TO SAVE THE ACA! Senate GOP leaders have delayed a vote on the disastrous Trump-Pence-McConnell effort to destroy the Affordable Care Act (ACA), which would disproportionately affect the LGBTQ community as well as millions of other Americans. But just because the vote is delayed doesn’t mean you should take a break, too! Text “Save ACA” to 30644 -- you’ll be connected to your senator to urge them to oppose this repeal effort. Because of the ACA, thousands of low-income LGBTQ people, including those living with HIV, have been able to obtain health insurance through the Medicaid expansion, and many rely on essential services provided by Planned Parenthood. Last week, HRC strongly condemned the hatched-in-secret proposal to gut the ACA and defund Planned Parenthood, undermining life-saving access to health care for as many as 23 million Americans. More from The Associated Press.

● HRC President Chad Griffin (@ChadHGriffin) and Equitas Health President and CEO William Hardy, writing today in the Cleveland Plain Dealer, lay out why the stakes are so high in the fight to save the ACA for LGBTQ Ohioans -- and all Americans. “People are facing dire consequences if President Donald Trump succeeds in his quest to destroy health care to serve a political talking point,” they write, “and the impact on LGBTQ people, communities of color, women, children, seniors and others disproportionately reliant on the ACA will be devastating.” More from Cleveland Plain Dealer.

Shot: “My Administration is determined to build upon these improvements and continue supporting domestic and global health programs that prioritize testing and treatment for HIV/AIDS.” [White House Press Office, June 27, 2017]

Chaser: "Senate Republicans unveiled their version of the bill to repeal and replace ObamaCare Thursday. The bill includes deep cuts to Medicaid and would defund Planned Parenthood for a year. According to the Presidential Advisory Council on HIV and AIDS -- which lost six members over the weekend -- 40 percent of Americans with HIV depend on Medicaid to pay their medical bills." [The Hill, June 22, 2017]

Drunchie: “The Trump administration has proposed slashing programs that buy antiretroviral drugs for people who are infected with HIV, the virus that causes AIDS, by at least $1.1 billion -- nearly a fifth of their current funding. Researchers say the cuts could lead to the deaths of at least one million people in sub-Saharan Africa and elsewhere.” [The New York Times, June 26, 2017]

U.S. HOUSE APPROVES BIPARTISAN RESOLUTION CONDEMNING VIOLENCE AGAINST GAY AND BISEXUAL MEN IN CHECHNYA: The resolution calls on the Russian federation to “protect the human rights of all its citizens, condemn the violence and persecution, investigate these crimes in Chechnya, and hold accountable all those involved in perpetrating such abuses.” The measure, sponsored by Rep. Ileana Ros-Lehtinen (R-Fla.), also calls on the Trump Administration to condemn the violence and persecution in Chechnya, which has included kidnapping, torture and sometimes murder of gay and bisexual men. Read the resolution here, and more about violence in Chechnya, and the #EyesOnChechnya effort at HRC.

CONGRESS MEMBERS CALL OUT ED SEC. DEVOS’ INDIFFERENCE TO CIVIL RIGHTS: “You claim to support civil rights and oppose discrimination, but your actions belie your assurances,” say 34 lawmakers in a letter to Secretary of Education Betsy Devos. The letter -- led by Senator Patty Murray (D-Wa.) -- highlights her proposed budget cuts to the Office for Civil Rights, the agency’s decision to rescind guidance helping schools to comply with critical protections for transgender students and her appointment of anti-LGBTQ activists. More from HRC and BuzzFeed.

HRC MOURNS AVA LE’RAY BARRIN, TRANS WOMAN MURDERED IN ATHENS, GEORGIA: HRC was horrified to learn that a 17-year-old transgender woman, Ava Le’Ray Barrin, was shot and killed in Athens, Georgia, on Sunday. Jalen Breon Brown, 21, has been charged with Barrin’s murder, after allegedly shooting her during an altercation in an apartment parking lot. Friends remembered Barrin as a “social butterfly” and an “amazing girl” who “loved to make people laugh.” Barrin is the youngest known transgender murder victim in the U.S. this year. Since January 1, advocates have tracked at least 14 deaths from anti-transgender violence across the country -- all of whom have been people of color. More from HRC.

TODAY -- 48TH ANNIVERSARY OF STONEWALL UPRISING: Today marks the 48th anniversary of the Stonewall Uprising, a pivotal marker in the modern LGBTQ rights movement in the U.S. Harassed by local police simply for congregating, LGBTQ patrons decided to take a stand and fight back against the brutal intimidation they regularly faced. Exactly one year later, the first LGBTQ Pride marches took place in New York, Chicago and Los Angeles to commemorate the anniversary of this brave stand against injustice. More from HRC. 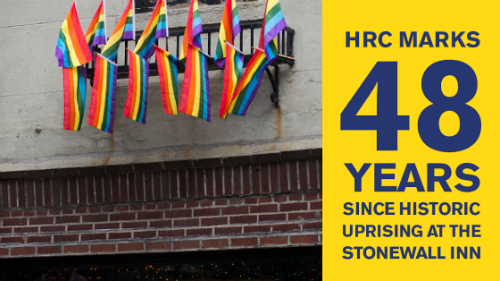 NEXT MONTH -- TEXAS SPECIAL SESSION TO DISCRIMINATE AGAINST TRANS PEOPLE: Earlier this month, Texas Governor Greg Abbott called for the session to consider anti-LGBTQ legislation -- including bills that would make it illegal for transgender people to access facilities consistent with their gender identity. The session will begin on July 18. More from The Daily Dot and San Antonio Current.

● Amber Briggle -- a Texas parent of a transgender child and member of HRC’s Parents for Transgender Equality Council-- wrote an open letter to Texas House Speaker Joe Straus urging him to stand up for trans children during the upcoming special session. More from TribTalk.

HEY, OHIO -- LGBTQ NONDISCIM PROTECTIONS ARE GOOD FOR BUSINESS: More than 60 businesses have indicated their support for a bill that would add sexual orientation and gender identity to Ohio’s nondiscrimination laws. More from Columbus CEO.

ONE COUPLE THAT PAVED THE ROAD FOR MARRIAGE EQUALITY NOW HAS A ROAD OF THEIR OWN: The Cincinnati block the couple lived on was renamed ‘John Arthur and Jim Obergefell Way’ to honor the two year anniversary of marriage equality. More from Upworthy.

GERMAN PARTY PUSHES FOR VOTE ON MARRIAGE EQUALITY: Germany's Social Democrats are pressuring the Bundestag for a vote on marriage equality this week after Chancellor Merkel signaled her desire for a free vote on the issue. More from Reuters.