Press call on the fight to save the Affordable Care Act; Trump’s travel ban is (still) unconstitutional.

TODAY @ NOON ET -- PRESS CALL ON THE FIGHT TO SAVE THE ACA: HRC, the National Center for Transgender Equality and Senator Bob Casey  (D-PA) will host a press call today at 12 noon ET to discuss the Trump-Pence-McConnell effort to destroy the Affordable Care Act (ACA) -- which would disproportionately affect the LGBTQ community as well as millions of other Americans. Because of the ACA, thousands of low-income LGBTQ people, including those living with HIV, have been able to obtain health insurance through the Medicaid expansion, and many rely on essential services provided by Planned Parenthood. Last week, HRC strongly condemned the hatched-in-secret proposal to gut the ACA and defund Planned Parenthood, undermining life-saving access to health care for as many as 23 million Americans. Please contact press@hrc.org for more information on the call.

● The American Medical Association slammed the proposal, saying “First, do no harm. The draft legislation violates that standard on many levels.” Read their letter to Senate Leader Mitch McConnell here.

TRUMP’S TRAVEL BAN IS (STILL) UNCONSTITUTIONAL: After the high court in the cases of Donald J. Trump v. International Refugee Assistance Project and Donald J. Trump v. Hawaii announced that it will consider this fall the constitutionality of Trump's Muslim travel ban -- and allowed portions of the ban to take effect. Ty Cobb (@TyWesleyCobb), Director of HRC Global, called the decision “flat out wrong,” noting that the ban “discriminates against a huge portion of  the world’s population and demonizes Muslims.” The court’s action yesterday, which will immediately affect travelers from Libya, Iran, Somalia, Sudan, Syria and Yemen, comes after two lower courts have blocked implementation of the discriminatory ban. “Worse yet,” Cobb said, “Trump’s reckless travel ban endangers LGBTQ people and others who are fleeing human rights abuses sanctioned by leaders in these countries. LGBTQ individuals are representative of all peoples.” More from HRC.

● Earlier this year, HRC joined the International Refugee Assistance Project  in an oped detailing how the President’s refugee policies are dangerous for LGBTQ people around the world.

ICYMI -- MASTERPIECE AND PAVAN: Yesterday, the U.S. Supreme Court also agreed to hear Masterpiece Cakeshop, Ltd. v. Colorado Civil Rights Commission, a case involving a baker who in 2012 refused to provide a wedding cake for a same-sex couple. Last year, the Colorado Supreme Court upheld a ruling by the Colorado Court of Appeals that bakery owner Jack Phillips cannot cite religious beliefs or free speech in order to discriminate against same-sex couples. Also yesterday, the high court ordered the state of Arkansas to allow both married same-sex parents to be listed on their child’s birth certificate. The decision, in Pavan v. Smith, overturns an Arkansas Supreme Court decision that had had banned the state’s Department of Health from listing both same-sex parents on their child’s birth certificate. The Arkansas Supreme Court decision would have forced same-sex couples to enter into legal proceedings to guarantee their children’s rights. More from HRC.

● Well, we warned you… In his dissent of the Pavan decision, Justice Neil Gorsuch stated that “Nothing in Obergefell indicates that a birth registration regime based on biology…offends the Constitution…Neither does anything in today’s opinion purport to identify any constitutional problem with a biology based birth registration regime,” indicating that he will be critical of LGBTQ equality in the courts. More from Mother Jones. And read our report on why Gorsuch has always been wrong for the LGBTQ community at HRC.

TUESDAY TWEET: Despite the vital importance of yesterday’s marriage equality anniversary to the LGBTQ community, 50 percent of LGBTQ Americans live in states where they are at risk of being fired, denied housing, or refused service because of who they are. There is no federal law explicitly protecting LGBTQ people from discrimination in employment, housing, education, public accommodations, and other important areas, and 31 states still lack fully-inclusive non-discrimination protections for LGBTQ people. HRC President Chad Griffin (@ChadHGriffin) shared what’s at stake on Twitter.

Today, as we celebrate the anniversary of marriage equality, it’s equally important to remind ourselves that the fight is far from over.

● HRC takes a look back at four influential cases -- and the couples, advocates, organizations and supporters -- that paved the way for national marriage equality. More from HRC.

HAPPENING TODAY -- U.S. HOUSE TO CONSIDER BIPARTISAN RESOLUTION CONDEMNING VIOLENCE AGAINST GAY AND BISEXUAL MEN IN CHECHNYA: The resolution calls on the Russian federation to “protect the human rights of all its citizens, condemn the violence and persecution, investigate these crimes in Chechnya, and hold accountable all those involved in perpetrating such abuses.” The measure, sponsored by Rep. Ileana Ros-Lehtinen (R-Fla.), also calls on the Trump Administration to condemn the violence and persecution in Chechnya, which has included kidnapping, torture and sometimes murder of gay and bisexual men. Read the resolution here, and more about violence in Chechnya, and the #EyesOnChechnya effort at HRC.

FORMER FOSTER YOUTH -- TEXAS ANTI-LGBTQ LAW IS DEADLY:  “In a state that prides itself on being “pro-life,” Texas lawmakers sure seem hell-bent on ensuring that children in the foster care system experience the absolute worst possible outcomes,” writes Kristopher Sharp (@SharpKristopher), a former foster youth from Texas,  in a bluntly honest piece for The Advocate. Earlier this month, Texas Gov. Greg Abbott signed HB 3859, which allows child welfare organizations to turn away qualified Texans seeking to care for a child in need, including LGBTQ couples and other parents to whom the agency has a religious objection. The law also forbids the state from canceling a state contract with an agency that subjected children in their care to dangerous practices such as so-called “conversion therapy.” Read more from Sharp at The Advocate.

TODAY IS NATIONAL HIV TESTING DAY: Scott Schoettes of Lambda Legal will join HRC at 4 p.m. for an #HRCTwitterTakeover to mark the day. HRC is dedicated to helping bring about an end to the HIV and AIDS epidemic, which continues to disproportionately impact members of the LGBTQ community, especially men who have sex with men and Black and Latinx people. One in eight Americans does not know their HIV status. More from HRC. 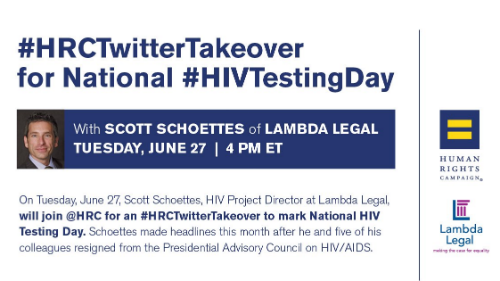 ● The New York Times highlights the Trump-Pence budget proposal to eviscerate funding to a U.S. Department of State program that provides antiretroviral drugs to people living with HIV. “As the Trump-Pence regime looks to destroy health care access here at home, including for essential HIV treatments, they have also proposed cutting humanitarian aid that could result in at least one million deaths around the globe,” said HRC President Chad Griffin. “Gutting this lifesaving program is cruel and reckless.” Read more at The New York Times.

MERKEL MOVE RAISES HOPES FOR MARRIAGE EQUALITY IN GERMANY: Chancellor Merkel noted at an event that she hoped marriage equality would be “headed towards a conscience vote.” More from The Guardian and The Washington Post.

TURKISH POLICE ARREST 44 AT ISTANBUL PRIDE PARADE: The governor of Istanbul banned the event for the third year in a row. An additional 25 people were detained during the event, but later released. More from The Associated Press.

We stand in solidarity with the #LGBTQ community in Turkey & all who face violence because of who they are #pride2017 https://t.co/XuBdwKkeZy

LGBTQ EQUALITY ON THE RISE AMONG IRAQI KURDISTAN, DESPITE ISIS INFLUENCE: Thanks largely to advocate Ayaz Shalal Hassan -- the region has seen a rise in acceptance, including the country’s leading party fielding the first-ever openly gay candidate for Turkish parliament. More from The Huffington Post.

TANZANIA THREATENS TO ARREST AND EXPEL LGBTQ ADVOCATES: Same-sex sexual relationships are punishable by up to 30 years in prison under Tanzanian law. More from Reuters.