TEXAS GOV. GREG ABBOTT SIGNS DISCRIMINATION INTO LAW: Yesterday, Abbott signed HB 3859, which allows child welfare organizations to turn away qualified Texans seeking to care for a child in need, including LGBTQ couples, interfaith couples, single parents or other parents to whom the agency has a religious objection. The law will also forbid the state from canceling a state contract with an agency that subjected children in their care to dangerous practices such as so-called “conversion therapy.” “After a legislative session full of attacks on LGBTQ Texans, today, Gov. Abbott has codified anti-LGBTQ discrimination into law by signing HB 3859,” said Marty Rouse, national field director for the Human Rights Campaign and a foster and adoptive parent. “This ‘Slate of Hate’ that the Texas legislature has made a priority harms LGBTQ Texans. This law will now prioritize discrimination over the best interests of children looking for a loving, stable home. That is unconscionable, and we implore Gov. Abbott not to pursue any further forms of anti-LGBTQ discrimination.” More from HRC.

NEW VIDEO FROM HRC AND EVERYTOWN -- IT’S TIME TO DISARM HATE: The video was created for #DisarmHate Week -- a week of remembrance for both the Pulse nightclub shooting and the Emanuel African Methodist Episcopal Church shooting. HRC President Chad Griffin (@ChadHGriffin) said, “The safety of LGBTQ people -- and others disproportionately targeted by hate -- requires the adoption of commonsense gun safety measures, including limiting access to assault-style rifles, expanding background checks, and limiting the ability for suspected terrorists, and those with a history of domestic abuse to access guns.  The urgency to combat hate and violence in all its forms was made tragically clear yet again this week, after our nation was rocked by several major shootings, including one that injured a Republican Member of Congress, U.S. Capitol Police officers and others. Now as always, we must stand united in support of justice and equality, and show the world that we are stronger than hate and fear.” Watch the video here.

COMMERCE DEPT. REMOVES LGBTQ PROTECTIONS FROM EEO STATEMENT -- THEN RESTORES THEM AFTER BLOWBACK IN MEDIA, FROM HRC: The U.S. Department of Commerce reversed its decision to exclude sexual orientation and gender identity in its 2017 Equal Employment Opportunity (EEO) statement late Thursday after David Mack (@DavidMackau) of BuzzFeed first reported on the slap to LGBTQ federal employees, and HRC called on the Administration to restore the protections. David Stacy, HRC Government Affairs Director, responding to the department’s initial move to exclude sexual orientation and gender identity in its EEO characterized the removal as “mean-spirited, deceptive and irresponsible.” Later yesterday, a Commerce Department spokesperson told Mack, “Secretary Ross has directed the Department to reissue the policy statement to address any concerns and prevent misinterpretation.” More from HRC and BuzzFeed.

FEEL GOOD FRIDAY -- GAY N.J. POLICE OFFICER HONORED AT PRIDE AFTER FACING DISCRIMINATION: After bravely speaking up about homophobia in his workplace, Officer Matt Stanislao was fired in 2014. In May, a settlement in a lawsuit he brought against Glen Rock, N.J., allowed him to return to the job he loved -- and he also received $750,000 in back pay and benefits. At the city’s LGBTQ Pride celebration, Stanisloa was honored for his bravery, and for the work he has done to improve conditions for LGBTQ poeple. “There are no words,” he said, standing in the park in his dress blues, The Times Sarah Maslin Nir (@SarahMaslinNir) reported, “transformed from pariah to honoree.” More from The New York Times.

DESPICABLE -- PUTIN CLAIMS HIS ‘DUTY’ IS TO STOP MARRIAGE EQUALITY: In an exclusive interview with filmmaker Oliver Stone, Russian leader Vladimir Putin said “I believe it's my duty to uphold traditional values and family values. But why? Because same-sex marriages will not produce any children.” His comments were made while gay and bisexual men are being rounded up, locked in secret prisons, tortured and even murdered by their own government in the Russian republic of Chechnya. HRC has called on the U.S. government to condemn these heinous crimes and take every possible step to help the victims to safety. This week during a House Foreign Affairs Committee hearing, Secretary of State Rex Tillerson admitted he has not raised concern about the issue with his Russian counterparts. More from Daily Mail.

● “They told me I wasn’t a human being” -- NPR’s Gabriela Saldivia (@_GSaldivia) tells the stories of the brutal treatment endured by two gay men in Chechnya. Read and listen at NPR.

HRC MOURNS KENDRA ADAMS, TRANS WOMAN MURDERED IN ITHACA, N.Y.: Kendra Marie Adams, a 28-year-old transgender woman, was killed on Tuesday in Ithaca, N.Y.. Adams also went by Josie Berrios, the name used in initial media reports on her death. Police have charged Michael Davis, 45, with Adams’ murder. Actor Asia Kate Dillon, a friend of Adams, told HRC, “This past Sunday, when I spoke at the Equality March in Washington, D.C., I said the names of the twelve trans women of color who have been murdered this year. Now, I say one more name; the name of my friend, Kendra Marie Adams. My heart is with her family and friends. Although law enforcement has acted swiftly, we must all take responsibility by deepening our commitment to supporting and uplifting our trans siblings, especially those of color because whether you identify as trans or cis, we all deserve the freedom to safely express ourselves, without the fear of ridicule or the fear of violence. Rest in peace and power, Kendra.” More from HRC.

CAUGHT ON CAMERA: Karen Handel, who will face HRC-endorsed Jon Ossoff in a runoff election for Georgia’s Sixth Congressional District seat, opposed marriage equality, civil unions, domestic partnership benefits and allowing same-sex couples to adopt during her 2010 gubernatorial campaign. Handel was caught on camera saying that same-sex parents aren’t as legitimate as different-sex parents -- and she didn’t even try to come up with an excuse for her blatant discrimination. Watch the video here.

NEW REPORT -- ‘TACKLING TRANSPHOBIA IN THE HEARTLAND’: The report found that canvassers who provided accurate information about transgender people were able to sway Ohio voters to support nondiscrimination protections for trans people. More from Advocate.

JAZZ JENNINGS HOPES HER SHOW WILL CHANGE HEARTS AND MINDS: HRC Youth Ambassador Jazz Jennings (@JazzJennings__) appeared on Access Hollywood to discuss the upcoming season of I Am Jazz, which follows her life as a transgender teen. More from Access Hollywood. 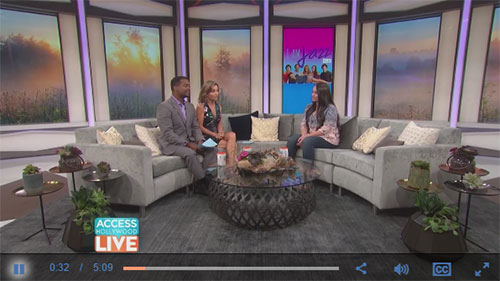 HRC MOURNS LOSS OF FORMER D.C. COUNCILMEMBER JIM GRAHAM: In addition to being a strong openly gay voice on the Council and lifelong LGBTQ advocate, Graham served as the executive director of the Whitman-Walker Clinic for 15 years during the AIDS epidemic. More from Washington Blade.

ICYMI -- POLITICO AD URGES SENATORS TO VOTE NO ON AHCA: The ad, placed by HRC and multiple HIV and AIDS health and advocacy organizations, calls on Senators to vote no on the American Health Care Act -- a dangerous bill that would undermine core provisions of the Affordable Care Act (ACA). The landmark ACA has extended healthcare coverage to an additional 22 million Americans since its passage in 2010, including many who are LGBTQ.

NYU USING TRANS ACTORS TO TRAIN MEDICAL STUDENTS: Many medical students never interact with a transgender patient while in school. A new New York University program is addressing that. More from The Daily Beast.

SAVANNAH, GA, TO OPEN LGBTQ CENTER: It will offer HIV testing and a resource center for LGBTQ youth. More from WJCL.

SERBIA COULD NAME FIRST OPENLY LESBIAN PRIME MINISTER: Ana Brnabic (@AnaBrnabic) could also become the first woman to hold the role. Brnabic was nominated by Serbian President Aleksandar Vucic, and will seek formal approval by Parliament next week. More from The Independent.