HAPPY LGBTQ PRIDE MONTH: As part of LGBTQ Pride Month, HRC is launching a nationwide Summer of Action anchored by more than 250 grassroots events from coast to coast. The theme of these events -- “Unite. Resist. Enlist.” -- reflects the goal of the Summer of Action: to empower and mobilize millions of equality voters to fight back against attacks that undermine the LGBTQ community. Over the coming  weeks, HRC staff and thousands of volunteers will be fanning out to lead hundreds of local events in more than 45 states, Puerto Rico and the District of Columbia. They will assist in registering thousands of new voters, host grassroots advocacy trainings, and step up visibility and outreach at LGBTQ Pride parades, equality marches, festivals and other events. During the weekend of June 10 & 11, which coincides with the June 11 National Equality March in Washington and the #ResistMarch in Los Angeles, HRC will hold a Weekend of Action at its headquarters in Washington, D.C., and at events across the country. More from HRC. 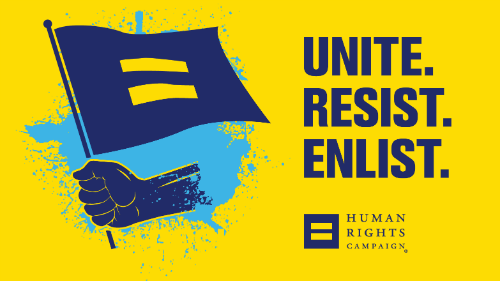 AP DETAILS INCREASING THREATS TO EQUALITY AT HOME AND ABROAD: In a sobering report for The Associated Press, David Crary (@CraryAP) writes that despite historic progress in recent years, LGBTQ advocates are facing a worrisome time, “as the pace of civil rights victories has grown uneven and reports of anti-LGBT violence and persecution surface relentlessly.” He cites the large-scale detentions of gay men in Nigeria and Bangladesh, the roundups and torture of scores of gay and bisexual men in Chechnya, and the caning of two gay men in Indonesia. Domestic developments under President Trump are also alarming. “He’s taken our chief enemies and put them in charge of our government,” said HRC President Chad Griffin (@ChadHGriffin). “It’s a devastating reversal of our progress over the last decade.” More from The Associated Press.

TRUMP’S LEAKED PROPOSAL PUTS EMPLOYERS IN CHARGE OF WOMEN’S HEALTH: Yesterday, HRC condemned Trump’s proposed regulation that could strip millions of women and LGBTQ people of access to critical contraceptive care previously guaranteed under the Affordable Care Act (ACA). Vox reported on a leaked draft of the proposal that would allow employers -- including for-profit companies --  to refuse to provide insurance coverage of birth control on the basis of religious or moral objections. “Trump is inviting employers to exert control over critical health care choices for their employees,” said HRC Legal Director Sarah Warbelow. “By providing cover to employers who wish to deny contraceptive coverage based upon religious or moral disapproval, he is placing millions of women and LGBTQ people’s health at  risk.” More from HRC and Vox.

RHODE ISLAND HOUSE VOTES TO ​PROTECT YOUTH FROM SO-CALLED “CONVERSION THERAPY”: “[This bill] protects minors from this barbaric, dangerous, and discredited practice,” said State Representative Joseph McNamara, chairman of the Health, Education and Welfare Committee, of Tuesday’s vote. If the bill becomes law, Rhode Island would become the fourth state this year to ban the debunked practice, after New Mexico, Connecticut and Nevada. More from The Providence Journal.

MICHIGAN LAWMAKERS CALL FOR NONDISCRIMINATION PROTECTIONS FOR LGBTQ COMMUNITY: State Senator Rebekah Warren and Representative Jon Hoadley are calling for state nondiscrimination protections to include sexual orientation and gender identity. “Because voters want it, business leaders want it, our cities and our counties are responding to the need for this,” said Representative Hoadley. “It’s just our state that is lagging behind.” More from CBS Detroit.

HRC MOURNS PULSE SURVIVOR KILLED IN CAR ACCIDENT: HRC was heartbroken to learn about the untimely passing of Jahqui Sevilla, a 20-year-old survivor of the Pulse nightclub shooting. Jahqui is mourned by her friends and family, as well as her teammates on the Orlando Anarchy women’s football team. More from WFTV.

SHAMEFUL -- LGBTQ ADVOCATES FORCED TO CANCEL CONFERENCE IN CHINA: The organizers of the Speak Out 2017 conference were allegedly told by authorities that they were not welcome in the Chinese city of Xi’an, and detained for eight hours. More from Hong Kong Free Press.

WELL-KNOWN CHARLOTTE PHILANTHROPISTS TO FUND LGBTQ YOUTH SHELTER: Howard Levine, former CEO of Family Dollar, and his wife, Julie, will match a $100,000 grant to support a planned shelter for LGBTQ youth in Charlotte. They join philanthropist Sarah Belk Gambrell, who donated $1.5 million to Time Out Youth, a LGBTQ youth center in Charlotte, in supporting LGBTQ young people. More from The Charlotte Observer.

READ ABOUT “TRANSGENDER BROKEN ARM SYNDROME”: According to the National Center for Transgender Equality’s United States Transgender Survey, nearly a third of transgender and gender nonconforming people have experienced discrimination at the doctor’s office -- including being denied treatment for broken bones. More from Gizmodo.

The Atlantic breaks down a study on how teachers and school administrators can support LGBTQ students; OutSports shares the story of an openly gay Minnesota sprinter coming out to his team; Gay Star News reports on an interview with gay man living in the Aceh region of Indonesia, where same-sex sexual activity is illegal; HRC marks the end of National Foster Care Month