NCAA’S DAMAGING REVERSAL ON DISCRIMINATORY LAWS IN NC: Today, HRC and Equality NC released the following statements in light of the NCAA decision to consider North Carolina for championship games, despite the discrimination against LGBTQ people that remains enshrined in state law. “The NCAA's decision to backtrack on their vow to protect LGBTQ players, employees and fans is deeply disappointing and puts people at risk," said HRC President Chad Griffin (@ChadHGriffin). “After drawing a line in the sand and calling for repeal of HB2, the NCAA simply let North Carolina lawmakers off the hook." "It is disappointing to see the NCAA backpedal after it stood strong against the deeply discriminatory HB2," said Equality NC Executive Director Chris Sgro (@CristoferSgro). "HB142 continues the same discriminatory scheme put forward by HB2 and does little to protect the NCAA's players, employees, and fans. The NCAA's decision has put a seal of approval on state-sanctioned discrimination." More from HRC. 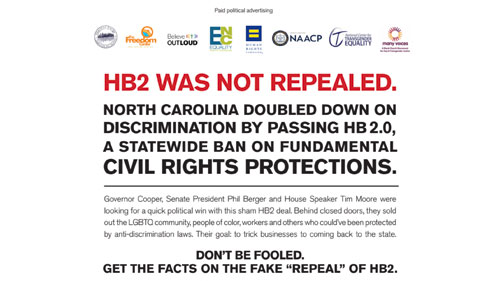 DEMOCRATS SECURE VOTES TO FILIBUSTER GORSUCH: Last week, HRC called on every pro-equality member of the U.S. Senate to vote “no” and filibuster Supreme Court nominee Neil Gorsuch, and our allies responded. “Neil Gorsuch refused to answer basic questions regarding his alarming history of opposing civil rights,” said HRC President Chad Griffin (@ChadHGriffin). “Anyone looking to gain a lifetime appointment to our nation’s highest court must prove they will apply a compassionate, impartial, and inclusionary interpretation of the Constitution faithful to its drafters' vision -- and Judge Gorsuch proved he is not that person. We believe every U.S. Senator must not only oppose Neil Gorsuch but also filibuster his nomination. Republicans should not unilaterally change long-standing Senate rules to allow Trump’s nominee to waltz into the Supreme Court.” Read more about Gorsuch’s long and troubling career opposing civil rights, including for LGBTQ people, here. More on the filibuster news from The Washington Post.

#Gorsuch's anti-equality views have no place on #SCOTUS. @HRC stands with all those trying to stop this dangerous nomination. https://t.co/jy4krtlZ3A

TUESDAY TWEET: Before Trump was elected, Senate Republicans stubbornly refused to hold hearings for Merrick Garland, then-President Obama’s nominee to the Supreme Court of the United States. Some Republicans even went so far as to suggest that if Hillary Clinton won, they would stand united against any of her judicial nominee. Yesterday, Huffington Post reporter Jennifer Bendery (@JBendery) called out the hypocrisy of some Senate Republicans speaking out against the filibuster of Gorsuch.

"The American people deserve an up or down vote on Neil Gorsuch." - Sen. Kennedy (R-La.)

But not on Merrick Garland?

FIFTH CIRCUIT PANEL HEARS ARGUMENTS ON ANTI-LGBTQ LAW, H.B. 1523: Yesterday in Lubbock, Texas, a conservative three-judge panel from the U.S. Court of Appeals for the Fifth Circuit heard arguments regarding Mississippi’s anti-LGBTQ law, H.B. 1523. The law, deceptively titled “Protecting Freedom of Conscience from Government Discrimination Act,” enables almost any individual or organization to discriminate against LGBTQ Mississippians at work, at school and in their communities. It is under review after being blocked from implementation last summer by a federal judge. Arguing against the law is Robbie Kaplan, the litigator who took on the discriminatory federal law known as the Defense of Marriage Act (DOMA) at the Supreme Court of the United States. Kaplan spoke passionately about why this law is unconstitutional, and why it should be struck down. More from the Associated Press.

Thank you, @KaplanRobbie for always fighting for the rights of #LGBTQ Americans, no matter where they live. pic.twitter.com/kaeBHV0P7i

GLOBAL ADVOCATES FROM NIGERIA TO PERU JOIN HRC TO FIGHT TRUMP’S ATTACKS ON IMMIGRANTS, REFUGEES AND LGBTQ COMMUNITY: In an oped posted this morning in Advocate, HRC SVP for Programs, Research and Training discusses the power of HRC’s Global Innovative Advocacy Summit, a gathering of 30 LGBTQ global leaders. The Trump Administration’s anti-LGBTQ, anti-immigrant and anti-Muslim policy positions have taken a distressing toll on the global LGBTQ community -- especially those who are refugees trying to escape a dangerous home country for a better life. Read the full piece from Advocate.

DRAG PERFORMER GIA GUNN COMES OUT AS TRANSGENDER: Gia Gunn, a former contestant on RuPaul’s Drag Race, came out as a transgender woman to mark Transgender Day of Visibility. In a powerful video posted to Instagram, she said, “Thank you to everyone who has supported me on this journey. If you are in transition, or struggling with your gender identity, I want to hear from you in the comments and let’s be visible.” More from NewNowNext.

This is me ������ #transvisibilityday #girlslikeus #transgender

CONGRATS RAFFI!: Raffi Freedman-Gurspan, the first openly transgender staff member at the White House, will return to the National Center for Transgender Equality (NCTE) as the Director of External Relations. Prior to her White House position, she served as a policy advisor for NCTE.

DOMINICAN LGBTQ COMMUNITY FEELS LOSS AFTER OPENLY GAY AMB STEPS DOWN: Former US Ambassador to the Dominican Republic James “Wally” Brewster was a mainstay in the country’s LGBTQ community -- speaking at Pride events, flying the rainbow flag outside of the US Embassy and living proudly with his husband, Bob Satawake. More from Washington Blade.

���� INDIAN ADVERTISEMENT NOTES POWER OF LGBTQ FAMILIES: Created by Vicks, the ad features the powerful relationship between an adopted daughter and her transgender mother, and the mother’s the struggle to secure rights for herself and her family. More from Asian Age.