TRANSGENDER AND GENDER NON-CONFORMING COMMUNITY FACE UNPRECEDENTED FATAL VIOLENCE IN 2020: “With news of the death of Felycya Harris, we have hit a grim milestone: we have now matched the highest number of transgender or gender non-conforming people who were victims of fatal violence in one year -- and there are 3 more months left in the year. This epidemic of violence, which is particularly impacting transgender women of color, must and can be stopped,” said HRC President Alphonso David (@AlphonsoDavid). The highest number of violent deaths of transgender or gender non-conforming people that the Human Rights Campaign previously tracked over a 12-month period was in 2017, when we also saw 31 people killed. More from HRC.

WHAT WE’RE WATCHING WEDNESDAY -- MAKE A PLAN, VOTE EARLY AND ENSURE YOUR VOICE IS HEARD: “I think this is the most important election of my lifetime,” said HRC State Legislative Director and Senior Counsel Cathryn Oakley (@CthrynOkly). When we cast our ballots this election, we won’t be deciding just our futures, but the futures of generations to come. Watch the video from HRC. 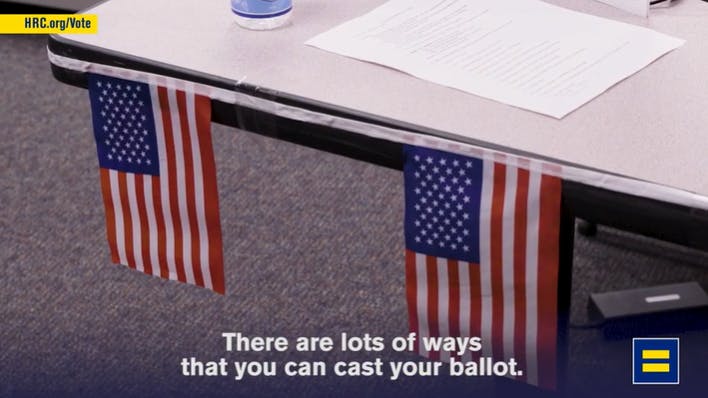 TOP FIVE LGBTQ QUESTIONS TO ASK DURING WEDNESDAY’S VICE PRESIDENTIAL DEBATE: With so much on the line for the LGBTQ community and the 57 million Equality Voters who prioritize LGBTQ issues at the ballot box, Susan Page must ask questions to highlight the sharp contrast between Vice President Mike Pence’s lifetime of anti-equality attacks and Kamala Harris’s lengthy record expanding and protecting the rights of 11 million LGBTQ Americans. Read the list of questions at HRC and Metro Weekly.

TRUMP CAMPAIGN FAILS AT OUTREACH TO LGBTQ VOTERS: “Rick Grenell got a really nice job at the RNC where he’s making some money and cutting some videos, attempting to target LGBTQ people, but what he’s doing is appearing on Fox News, living in the Twitter-sphere and what that is not doing is actual outreach to LGBTQ people,” said HRC Deputy Communications Director for Politics Lucas Acosta (@LucasRAcosta). More from American Independent.

✨ In these difficult times, you can still seek opportunities to continue practicing self care. Join HRC Foundation for Remaining Home in Faith VI: BIPOC Queer Resiliency in Times of Change, a discussion with Lama Rod Owens, author of “Love and Rage,” on Oct. 7 at 1:30 PM EDT. pic.twitter.com/2OJ3YrRNnB

WITH PROGRESS IN GLOBAL RIGHTS, TRANSGENDER POLITICIANS HAVE GAINED PROMINENCE IN RECENT YEARS. More from Openly.