HRC President Alphonso David: “Trump has no plan - never has”; Bend toward justice with Yogis for Equality!

HRC PRESIDENT: “TRUMP HAS NO PLAN -- NEVER HAS”: Last night, Donald Trump participated in a presidential debate for the final time, thankfully. In response, HRC President Alphonso David (@AlphonsoDavid) issued the following statement: “Donald Trump once again spewed an endless stream of lies and baseless attacks, highlighting not only his bias but utter bankruptcy of a plan. Trump has no plan -- never has… Joe Biden came prepared to tell Americans what life could be like with a president prepared to lead, prepared to take action and help this nation recover and thrive. This election is a referendum on our nation's values. It’s up to us to unite for equality and elect Joe Biden and Kamala Harris.”

NEW HRC VIDEO FEATURES SHOOTING SURVIVOR: “THE AFFORDABLE CARE ACT SAVED MY LIFE”: Yesterday, HRC launched its third video in a weekly series on Trump’s failure to keep LGBTQ people safe. The video, featuring Arizona State Representative Jennifer Longdon -- who was paralyzed in a random shooting -- highlights how the Trump-Pence administration’s attempts to undo the Affordable Care Act would leave millions under threat of being denied insurance or care because of preexisting conditions. “The Affordable Care Act changed my life,” said Arizona State Representative Jennifer Longdon (@JenLongdon). “I didn’t have to worry anymore that my medications -- that my devices weren’t going to be covered, and honestly, once I got better coverage, I was able to become a better contributing member to my community... Electing Joe Biden as president is what stands between us and repeal of the Affordable Care Act. We are all one accident, one injury away from catastrophe. We have to vote.” Watch the video here.

NEW POLL SHOWS HIGHEST LEVEL OF SUPPORT FOR MARRIAGE EQUALITY EVER RECORDED: This week, the Public Religious Research Institute (PRRI) -- the gold standard for polling on LGBTQ issues -- released its annual American Values Survey, tracking support for LGBTQ equality. The poll found that seventy percent of people in the United States support same-sex marriage, the highest percentage recorded by a major national poll. The poll also found that support for non-discrimination protections also grew substantially this year, after not changing much for a decade. More from HRC. 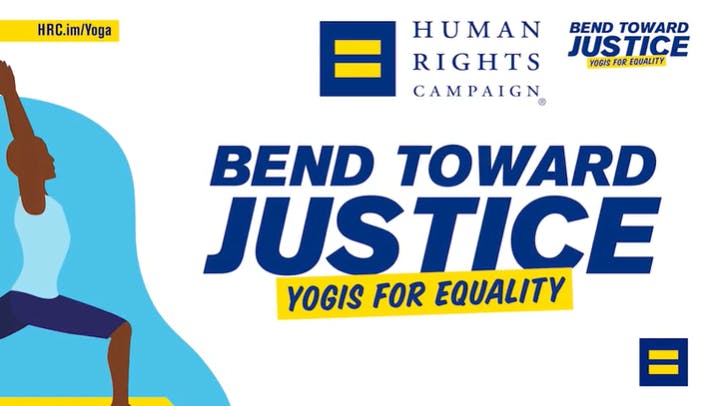 Play the Video: Bend Toward Justice—Yogis for Equality

TODAY AT 11 A.M. EDT -- HRC PRESIDENT ALPHONSO DAVID SPEAKS ON PANEL AT WORLD ECONOMIC FORUM: The panel, titled “Accelerating LGBTI Inclusion in the Workplace,” will explore existing efforts and initiatives to support and protect LGBTQ and intersex communities during the COVID-19 crisis and in the post-COVID recovery of economies. Learn more and tune in here.

INCLUDING LGBTQ HISTORY IN THE CLASSROOM IS ESSENTIAL: More from the Washington Blade.

Bend Toward Justice—Yogis for Equality