HRC: Vote on Amy Coney Barrett’s confirmation is an affront to LGBTQ equality

HRC: VOTE ON AMY CONEY BARRETT’S CONFIRMATION IS AN AFFRONT TO LGBTQ EQUALITY: “Make no mistake: Judge Amy Coney Barrett’s appointment to the Supreme Court is a direct threat to LGBTQ equality,” said HRC President Alphonso David (@AlphonsoDavid). “The LGBTQ community’s rights hinge far too often on narrow Supreme Court victories. From the freedom to be ourselves without fear of arrest to receiving protections from being fired from our jobs, from marriage equality to health care access, we rely on the Court to affirm our dignity and rights. Today’s vote is an endorsement by the Republican members of the Judiciary Committee of Judge Barrett’s prejudiced and deeply concerning allegiances, and an abdication of their responsibility to protect the rights of all Americans. We implore the full Senate to reject her nomination.”

HRC PRESIDENT ALPHONSO DAVID ON POPE FRANCIS EMBRACING SAME-SEX UNIONS: “Pope Francis took a significant step for inclusion and acceptance in the Catholic Church by embracing unions for same-sex couples and affirming that LGBTQ Catholics are a part of their religious family,” said HRC President Alphonso David. “By shifting Catholic theology in a more inclusive direction and making clear that LGBTQ people have a right to their own families, Pope Francis is letting LGBTQ Catholics know that being a person of faith and being LGBTQ are not mutually exclusive. While we at the Human Rights Campaign acknowledge this moment, we continue to push the Catholic Church, and all religious leaders, to fully embrace LGBTQ people and endorse marriage equality for same-sex couples, our right to have families, and to be full members of our faith communities.” More from HRC, USA Today, NPR and the Washington Blade.

HRC REPORT HIGHLIGHTS THE UNIQUE IMPACT OF FELONY DISENFRANCHISEMENT LAWS ON WOMEN OF COLOR: Yesterday, HRC released Banned from the Ballot Box: The Impact of Felony Disenfranchisement Laws on LBTQ Women of Color, a new report detailing the United States’ history of felony disenfranchisement and how laws have uniquely impacted lesbian, bisexual, transgender and queer women of color, who are the fastest growing group in the juvenile justice system. “For far too long, laws and policies have been enacted to restrict the rights of people of color to vote and include women, LGBTQ people and other marginalized communities,” said HRC President Alphonso David. “We need systemic change at every level to break the cycle of racial and social injustice that affect all people of color.” More from HRC. 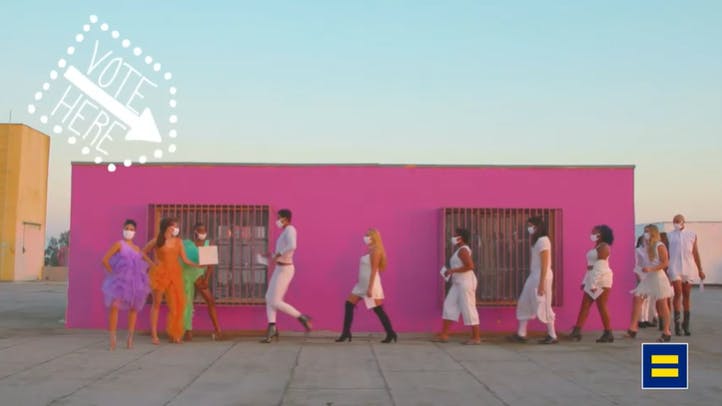 CENTER FOR AMERICAN PROGRESS AND UNIVERSITY OF CHICAGO RELEASE NEW STUDY ON ANTI-LGBTQ DISCRIMINATION: The study found that over 1 in 3 LGBTQ Americans reported facing discrimination over the past year. More from 19th News.

CITI BANK TO ALLOW TRANS AND NON-BINARY CUSTOMERS TO USE CHOSEN NAMES ON THEIR CREDIT CARDS: More from The Advocate.

🇺🇸 IN THE STATES

HRC TEXAS CONDEMNS NEW TRANSPHOBIC NRCC ADS AGAINST GINA ORTIZ JONES: Said HRC Texas State Director Rebecca Marques (@_RebeccaMarques), “Their closing argument in Texas appears to be not just attacking LGBTQ people but our nation’s veterans and military. This isn’t just ineffective, it's counter to the 88% of Texas voters who believe transgender people should have equal access to medical care as any other Texan… With less than 2 weeks left in this race, we stand with a true leader and veteran in Gina Ortiz Jones.”

LGBTQ GROUPS LAUNCH GENDER-AFFIRMING MAKEUP ROOM IN CHICAGO: The effort was led by the Brave Space Alliance (@BSAlllianceChi) and the Chicago Black Drag Council (@DragCouncil). More from them.