ICYMI -- HRC RESEARCH BRIEF ON THE UNIQUE VULNERABILITIES OF THE LGBTQ COMMUNITY DURING THE COVID-19 CRISIS: The research brief outlined health and economic risks facing the LGBTQ community. “We are facing a global public health crisis, and as in all emergencies, the most marginalized are at increased risk,” said HRC President Alphonso David (@AlphonsoDavid). “It is important to know and understand the unique impact of the virus on the LGBTQ community so that we can prepare to weather this crisis as we have weathered crises before -- by uniting as a community and helping those in greatest need.” More from HRC and Blavity.

As one of @nbcsnl’s openly gay and the first Chinese-American cast member, Bowen Yang is inspiring generations to come. We were proud to honor him with the @HRC Visibility Award in February for his work encouraging LGBTQ people everywhere to embrace their authentic selves. ���� pic.twitter.com/lBHP5369EO

THANKFUL THURSDAY -- DESPITE SOCIAL DISTANCING, LGBTQ PEOPLE ARE CREATING COMMUNITY AND COMING TOGETHER DIGITALLY: “The LGBTQ community, in particular, has an experience of needing to connect using the internet, when there oftentimes aren’t other options,” said Michael Vazquez (@mvsebastian), HRC’s religion and faith program director. “We are also uniquely positioned in a way to engage in digital work because the LGBTQ community has such a long experience having to mobilize this way.” More from NBC.

"Just because people are stuck at home does not mean that our activism stops." - @AlphonsoDavid

Read more about how we're expanding our digital footprint, from virtual interfaith engagement to mobilizing Equality Voters across the country.https://t.co/ZN1fjPB7Co

Another week of #SocialDistancing means another week of MOVE University LIVE from our living rooms to yours. This week, we're joined by @_RebeccaMarques, Texas State Director for @HRC to talk about the state of LGBTQIA+ rights in the lone star state.

CELEBRATING THE BI+ TRANS COMMUNITY: About half of transgender people describe their sexual orientation as bi+. More from HRC.

SOUTHERN POVERTY LAW CENTER RELEASES REPORT DOCUMENTING U.S. BASED HATE GROUPS IN 2019: While the report details a slight decline in overall groups, there is an increase in white nationalist, anti-LGBTQ and anti-immigrant hate groups. Read the full report here.

GAY MAN FROM GHANA GRANTED ASYLUM TO THE U.S. AFTER APPEAL: The man, who was attacked by a group after he was outed as gay, was initially denied asylum because the judge claimed he could “avoid further prosecution back home if he kept his sexuality a secret.” More from U.S. News and World Report.

HRC GLOBAL ALUMNI SHARE HOW THEIR WORK IS CHANGING DURING COVID-19: More from HRC.

“We are working on providing assistance to LGBTIQ refugees who live in Argentina. Most of them have jobs in the informal economy. Due to the forced quarantine, they are not able to work and, as a result, need food assistance.” - @marianoruizrg pic.twitter.com/LgEeToeU6I 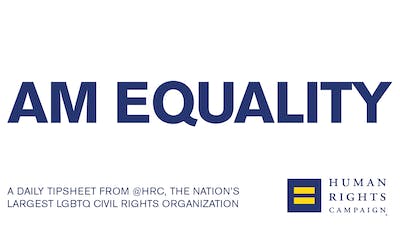