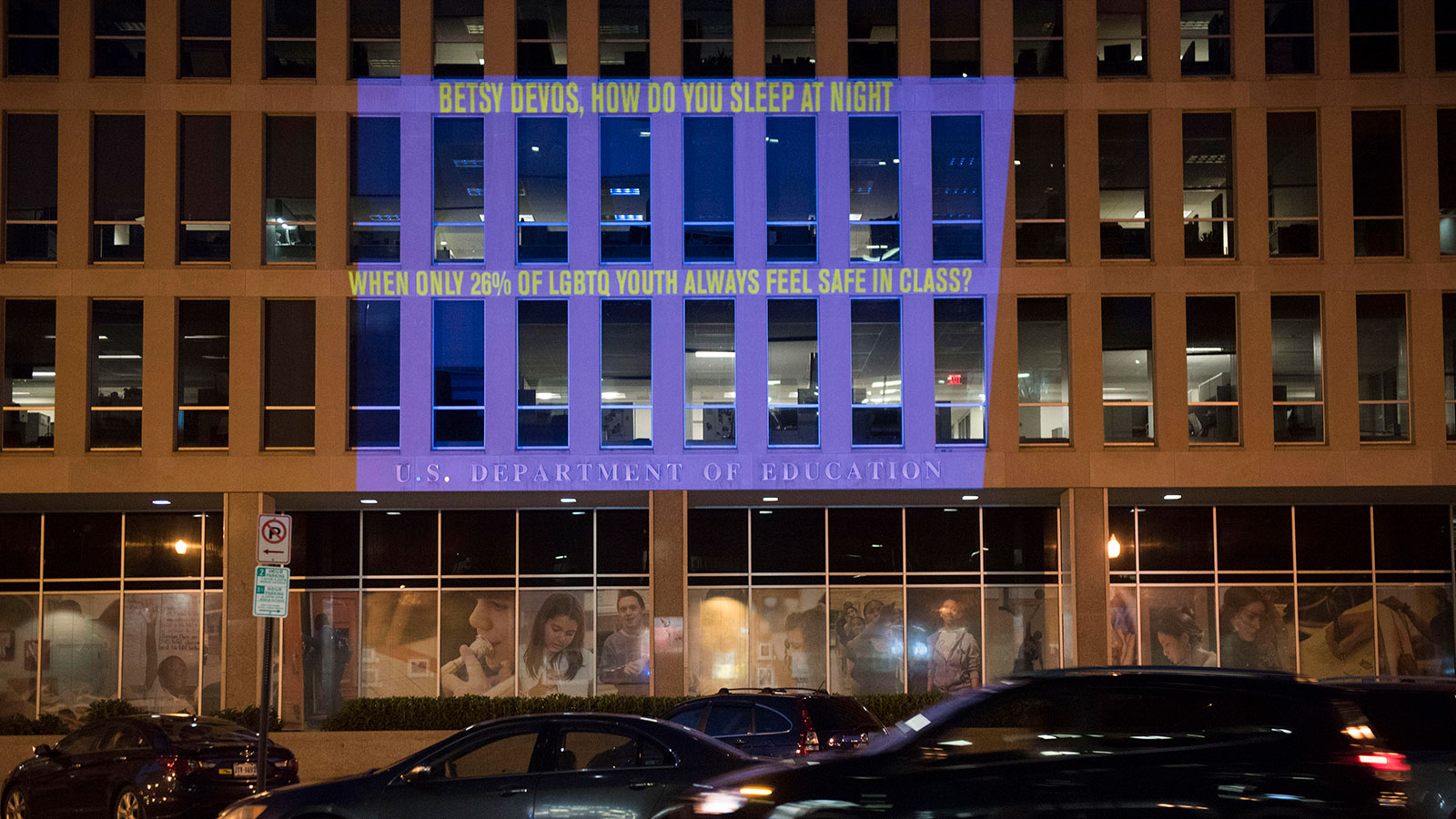 HRC and artist Robin Bell projected a message to Betsy DeVos to raise awareness about how the Trump-Pence Administration’s policies are harming already vulnerable LGBTQ youth. This morning, HRC released the results of a groundbreaking survey of 12,000 LGBTQ teens performed by HRC and researchers at the University of Connecticut on to the U.S. Department of Education building in Washington, D.C. The survey found that LGBTQ teenagers are not only experiencing heartbreaking levels of stress, anxiety and rejection, but also overwhelmingly feel unsafe in their own schools.

The projection, which included a survey finding that 95 percent of LGBTQ teens report trouble getting to sleep at night, asked U.S. Secretary of Education Betsy DeVos, “how do you sleep at night?”

“Betsy DeVos has spent the last year and half relentlessly attacking the rights of transgender students, youth of color, survivors of sexual assault and students with disabilities,” said Ellen Kahn, HRC’s Director of Children, Youth and Families Programs. “While these survey results underscore the challenges facing LGBTQ youth, it also reflects their perseverance and strength in the face of bullies -- whether in their classrooms or the federal government. Given the disastrous and dangerous actions of Donald Trump and Mike Pence, the question must be asked of everyone in this administration, ‘how do you sleep at night?’”

The results of the largest-of-its-kind survey highlight the challenges facing LGBTQ youth, particularly transgender young people and people of color, who have experienced ongoing efforts by the Trump-Pence administration to undermine their rights -- from rescinding lifesaving guidance promoting equitable treatment of transgender students and refusing to investigate complaints filed by transgender students who face discrimination in school facilities, to racist immigration policies and giving shameful passes to hate groups and white supremacists.

This survey comes five years after HRC’s groundbreaking 2012 study of LGBTQ youth -- one of the first initiatives launched by the organization under HRC President Chad Griffin’s leadership. They comprise the most reliable data collected about the experiences of LGBTQ young people in America.

The U.S. lacks reliable data about LGBTQ people, especially about the experiences of LGBTQ youth. In light of this, and in the face of consistent attacks on LGBTQ youth, HRC is committed to ensuring this data is in the hands of teachers, counselors, coaches, doctors and other youth-serving professionals across the country. These findings will inform a variety of HRC Foundation programs for youth and youth-serving professionals, including the Welcoming Schools program, the All Children-All Families program and the Time to THRIVE conference.