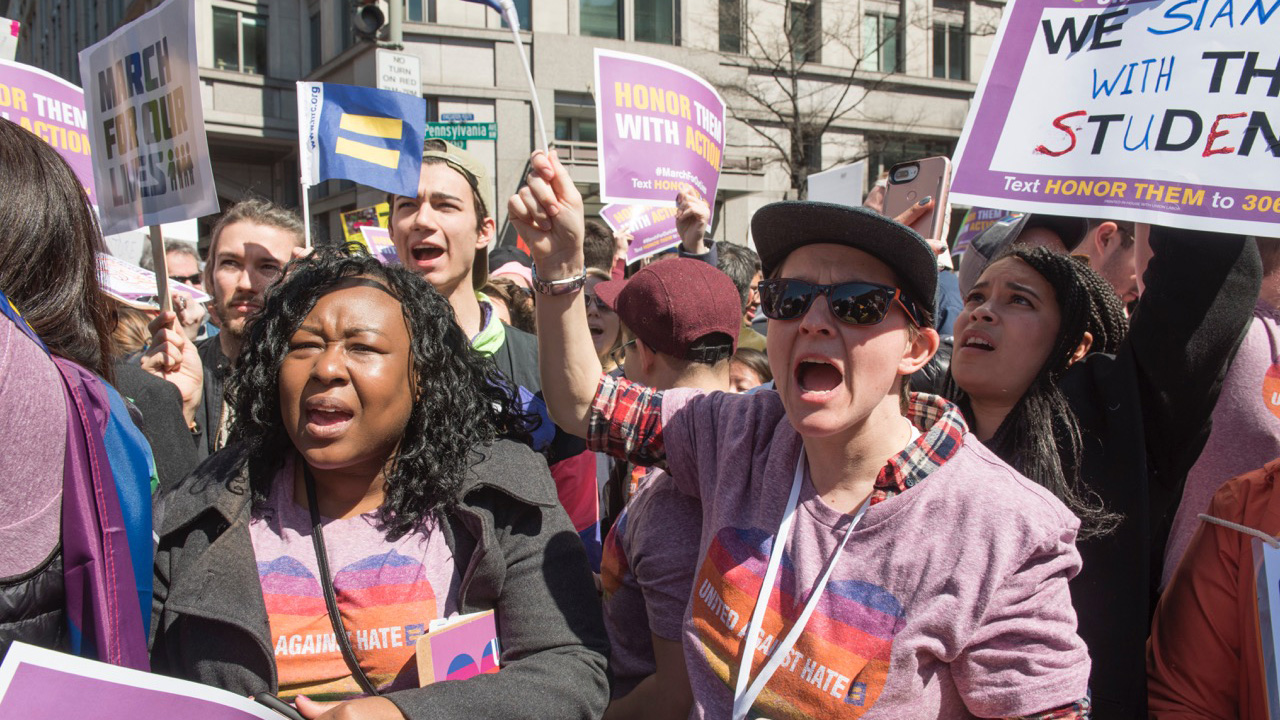 Today, Pulse Nightclub shooting survivors and family members led hundreds of members and supporters of  HRC in the March For Our Lives in Washington, DC. Before stepping off, the survivors and family members addressed HRC’s annual Spring Equality Convention to talk about the Pulse Nightclub shooting and the importance of mobilizing the LGBTQ community against gun violence.

Christine Leinonen, mother of Drew Leinonen; Brandon Wolf, friend of Drew and Drew's boyfriend Juan Guerrero, who were both killed; and José Arraigada — the three of which appeared and spoke on stage at the DNC one month after the shooting in 2016 — joined with fellow survivor and Pulse survivor, Ricardo Negron, onePulse Foundation Board Chair Earl Crittenden, and HRC President Chad Griffin to lead hundreds of HRC members and supporters. The marchers were also led by Karamo Brown, one of the hosts of Queer Eye and a graduate of Marjory Stoneman Douglas High School in Parkland, Florida. Brown knew Aaron Feis, the football coach who was killed in the Parkland attack. He is the co-founder of 6in10.org, which combats HIV stigma and provides support and education to the Black LGBTQ community. Brown has partnered with the Los Angeles LGBT Center, the Center for Disease Control, and the National Black Justice Coalition through his advocacy.

“Today we’re proud to be led by Pulse survivors and family members and join the hundreds of thousands of students and their supporters from across the nation in the March For Our Lives,” said HRC President Chad Griffin. “As the tragedy at Pulse showed us, hate can turn deadly when coupled with unfettered access to military style weapons. The safety of LGBTQ people and other marginalized communities that face disproportionate levels of hate and violence requires the adoption of common-sense gun safety measures.”

“We cannot only come together in the wake of tragedy. Every day, we have to muster the strength to fight with the same pride, courage, and unity we witnessed after the tragedy at Pulse, and now after Parkland. The legacy of those whose lives were taken must be our action,” added Griffin.

In 2016, after a gunman killed 49 people — most of them LGBTQ and Latinx — in Orlando’s Pulse Nightclub, HRC’s Board of Directors adopted a resolution that addresses both the epidemic of hate that has fueled anti-LGBTQ-motivated murder, assault, and discrimination, as well as common-sense gun violence prevention policies that would help keep the LGBTQ community safe. The resolution established HRC’s organizational position that the safety of LGBTQ people in the United States requires the adoption of common-sense gun violence prevention measures, including limiting access to assault-style rifles, expanding background checks, and limiting the ability for suspected terrorists — and those with a history of violence against women — to access guns. Since 2013, HRC has tracked 111 incidents of fatal violence against transgender and non-binary people. Of these, 62 have been victims of gun violence. In 2017, 16 out of the 28 deaths were the result of gun violence.