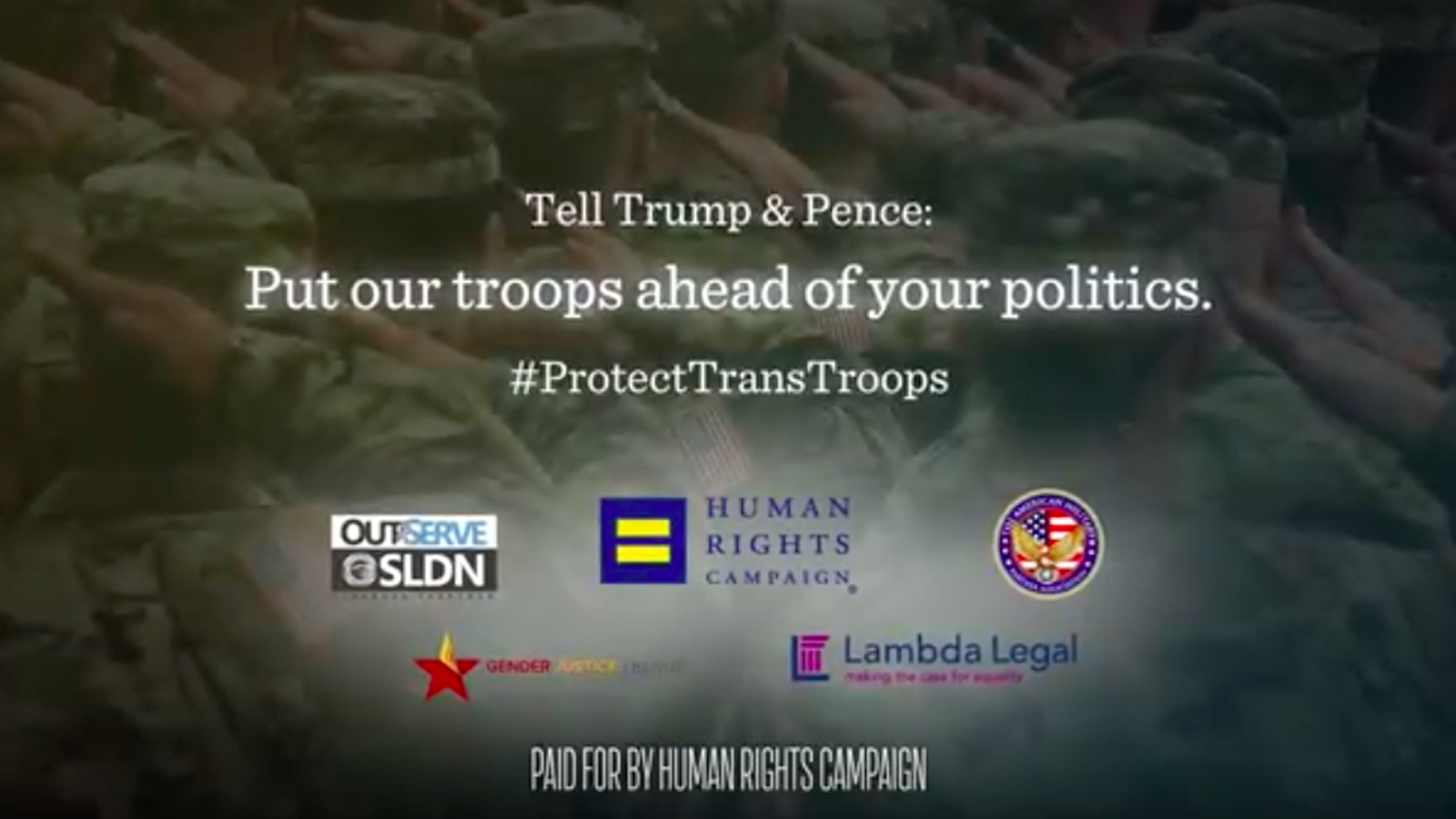 “Donald Trump and Mike Pence have pursued this unconscionable, unconstitutional ban despite the opposition of our military leaders, national security officials, bipartisan lawmakers, and the vast majority of Americans who believe that brave, qualified transgender troops should be allowed to serve their country,” said HRC President Chad Griffin. “It's long past time the White House abandon this reckless, unconstitutional ban and give these brave individuals the dignity, respect and honor they deserve.”

“The drumbeat of principled and expert opposition to the tweeted ban on transgender military service continues to grow louder and louder, illustrating how dangerous and short-sighted this discriminatory policy is,” said Sasha J. Buchert, Staff Attorney at Lambda Legal. “Military leaders, elected officials from both sides of the aisle and an overwhelming majority of Americans oppose this ban. It is time for the Trump Administration to end this misguided and harmful policy, and no amount of paint will cover up its obvious and unconstitutional intent.”

"The Trump-Pence Administration needs to hear loud and clear that their bigoted, discriminatory ban is severely out of touch with not just lawmakers on both sides of the aisle and current and former military leaders but from every day Americans," said Matt Thorn, President & CEO of OutServe-SLDN. "We urge Americans from every stripe to call and tell the Trump-Pence Administration to stop playing politics with our nation’s Armed Forces. Our trans service members deserve a Commander-in-Chief who values their commitment, their honor, their courage to this country, and their willingness to risk their lives in its defense of its freedoms. It is time for this administration's attempt at a transgender service member ban be abandoned. We will continue our legal challenges should the Trump-Pence Administration continue down this road of discrimination and distraction."

"We are at a critical juncture in the White House's shameful attempt to implement a transgender military ban, and it's essential that fair-minded Americans call and tell Donald Trump and Mike Pence to stop putting their politics ahead of our troops," said Ashley Broadway-Mack, President of the American Military Partner Association. "Our transgender service members and their families deserve better than to be targeted and singled out by this administration for blatant, unconstitutional discrimination. It's time this White House abandon this unconscionable transgender military ban and start honoring and supporting ALL of our nation's brave service members."

“What we know at Gender Justice League is what every court who has ruled on this ban has said; the transgender military ban is wrong and unconstitutional,” said Danni Askini, Executive Director of Gender Justice League, “We have members who are hard working service members and veterans who all deserve to be judged on their ability to do their jobs, not on their gender. We are calling on the Trump Administration to drop this cynical attack and do their job to support Americans willing to serve their country.”