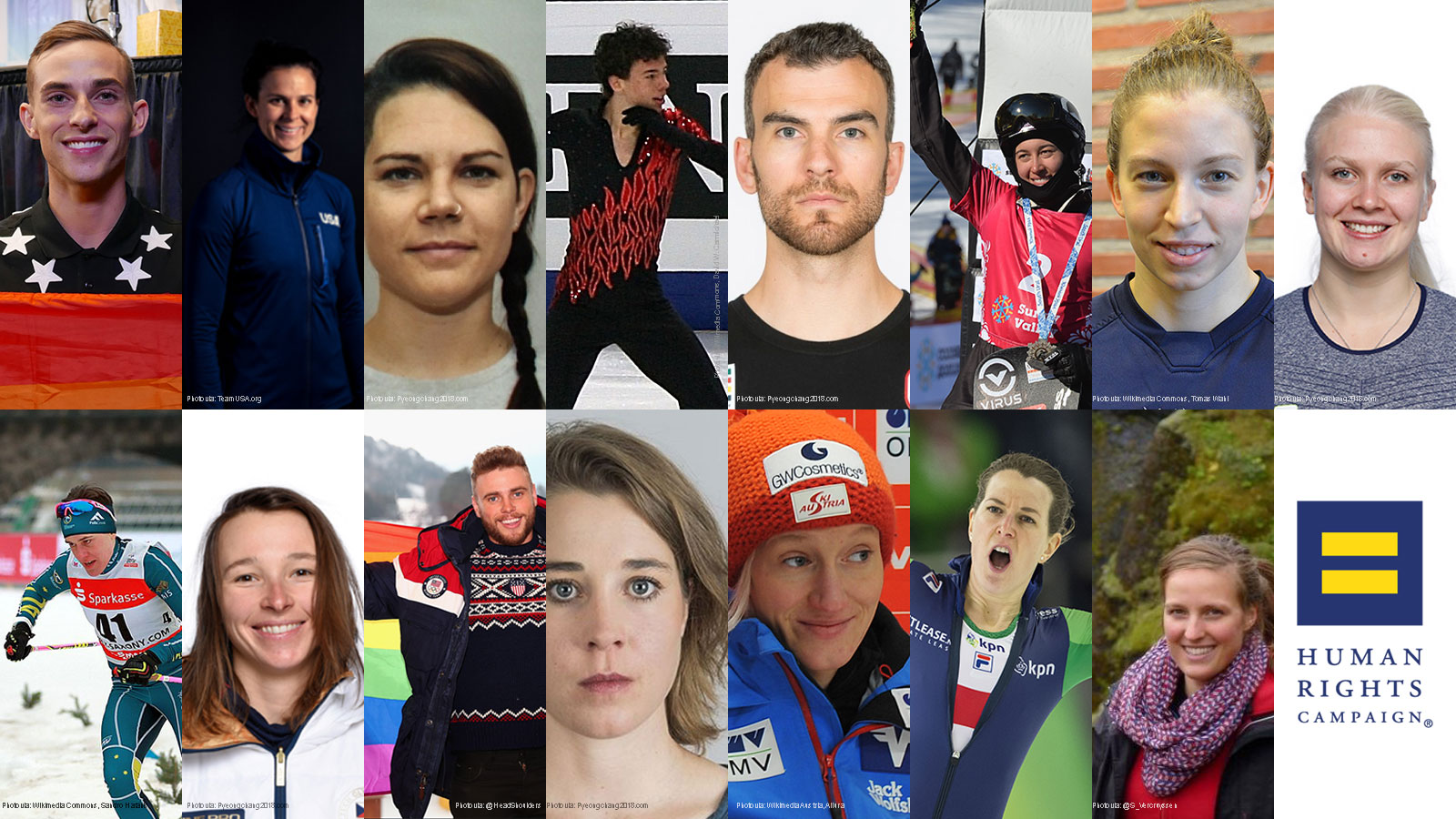 1. Before the competions had even started, LGBTQ athletes were making headlines. Openly gay U.S. Olympians Gus Kenworthy and Adam Rippon were critical of anti-LGBTQ Mike Pence’s role in the Opening Ceremony.

Anti-LGBTQ Mike Pence can't hide his hatred behind misleading tweets. As @HRC's @cmclymer said, "He’s a soft-spoken bigot. He does a lot behind the scenes to dismantle #LGBTQ rights but is able to cover it up with his lack of verbal hostility.” #Olympics https://t.co/S2RKrK3pkv

2. Team Canada illustrated its commitment to LGBTQ-inclusion, hosting the Pride House for the Winter Olympics.

3. Gus Kenworthy became the first person to wave a pride flag in a national commercial, featured in P&G’s “Shoulders of Greatness” campaign.

We are so proud to call @GusKenworthy a member of the @HRC family. Thank you @ProcterGamble for sharing this special message with us. #LoveOverBias pic.twitter.com/8Y1nX4CpGo

.@ProcterGamble is a leader in #LGBTQ inclusion in the workplace, receiving a perfect 100 on @HRC's #CEI2018. Watch their new ad featuring out athlete @GusKenworthy, headed to the #Olympics very soon. https://t.co/q9WjSKL4fd

4. Openly bisexual Netherlands speed skater Ireen Wüst became not only the first out athlete to medal in Pyeongchang, but the most decorated out Olympian of all time.

Congratulations to #bisexual speed skater Ireen Wüst (@ireenw) who is the first out #LGBTQ athlete to medal at the #Pyeongchang2018 #Olympics. With this latest win for the Netherlands, she is now the most decorated openly #LGBTQ Olympian of all time.⛸️��https://t.co/RSi8taKzBS

With the 2018 #WinterOlympics underway in #PyeongChang, we are so proud to see out athletes like @BrittanyBowe, @GusKenworthy, and Adam Rippon (@adaripp) representing #TeamUSA ���� and giving hope to young #LGBTQ people everywhere. . . . #Repost @brittanybowe: Opening Ceremonies with the best of US #winterolympics #teamusa

6. With Canada’s gold medal in the figure skating team event, openly gay pairs skater Eric Radford became the first gay male athlete to ever win a gold medal at the Winter Games. Radford and his skating partner, Meagan Duhamel, went on to win bronze in the pairs skate.

7. In an exclusive interview with HRC’s Mark Lee, Adam Rippon shared the story of his trailblazing journey to Pyeongchang.

Adam Rippon has made history at the #Olympics. From his incredible skating, @HRC is so proud to celebrate @Adaripp as part of our #LGBTQ family. #BestofUS ��️‍��⛸���� pic.twitter.com/7IR4iuk2ja

8. Openly LGBTQ speed skater Brittany Bowe helped propel Team USA to a bronze medal finish in the speed skating team pursuit event, the first medal in the event for the U.S. in 16 years.

9. At the end of a slopestyle run, NBC showed openly gay U.S. skier Gus Kenworthy sharing a kiss with his boyfriend, Matthew Wilkas. While Kenworthy may not be leaving Pyeongchang with a medal, he is a winner in our books, changing hearts and minds along his journey.

.@GusKenworthy is competing in his second #Olympics, but this is his first as an openly #gay athlete. The slopestyle skier, who came out in 2015, struggled with Russia’s harsh anti-#LGBTQ climate during the Sochi games. . Tonight, he kissed his boyfriend, Matthew Wilkas (@mwilkas), on live TV. ❤️���������� . . #guskenworthy #LGBT #LoveIsLove #olympics2018 #pyongchangolympics2018 #teamUSA

"Being here now, out and proud and living my life authentically, I'm walking away more fulfilled without a medal than I did at the last Games with one." - @guskenworthy ❤️�������� https://t.co/0E8DFk9QBT