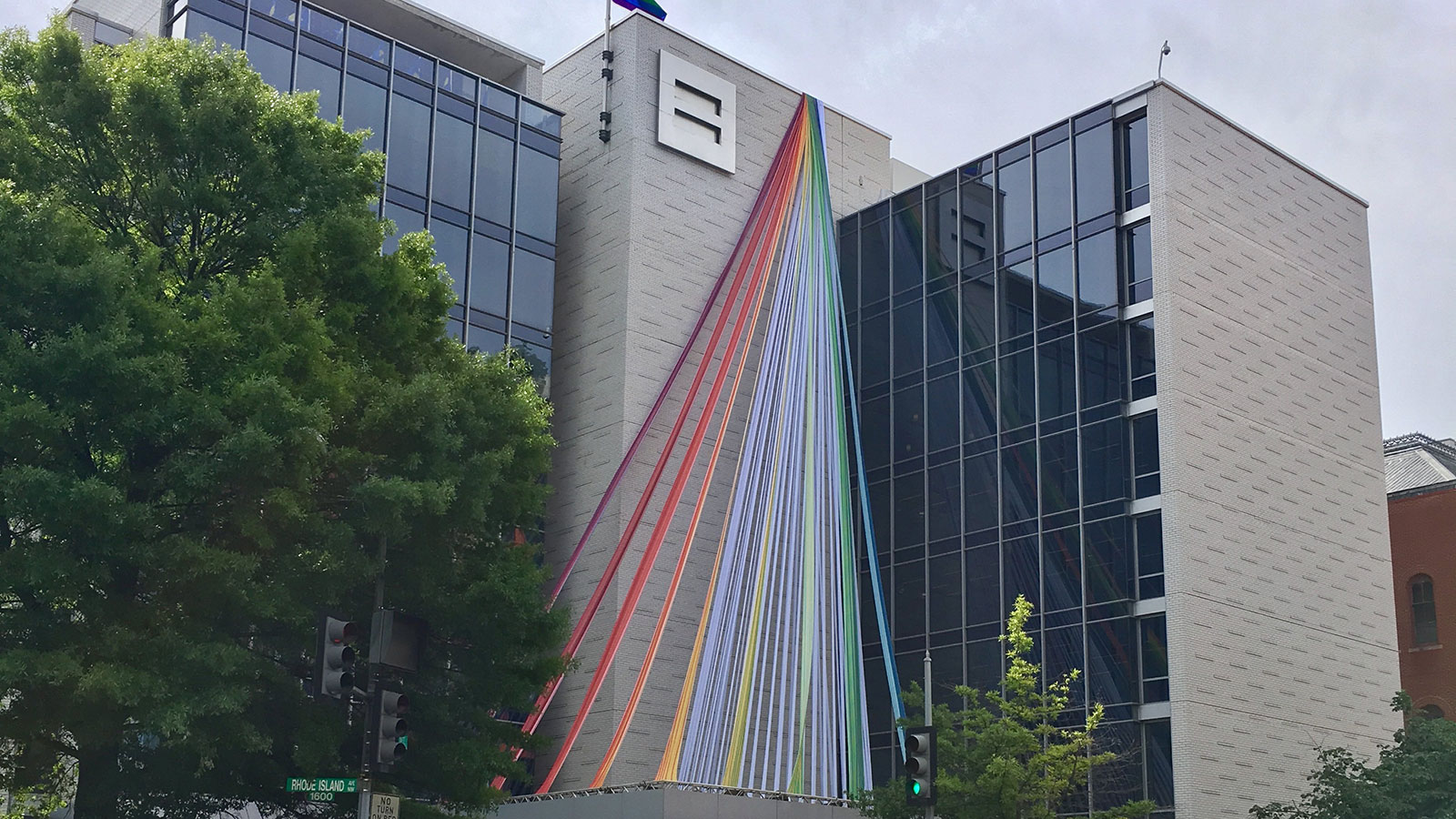 HRC unveiled a monumental art installation by world-renowned artist Megan Geckler, in honor of Pride and the one-year mark of the deadly attack at the Pulse Nightclub in Orlando.

On June 12, 2016, the attack at Pulse Nightclub in Orlando claimed the lives of 49 people -- most of them young, LGBTQ and Latinx. Now, one year later, and as people from across the nation gather in Washington to celebrate Pride, HRC will honor their memory by transforming its headquarters into a beacon of hope and resilience.

This monumental tribute, 49, uses 49 white fabric strips to represent the lives taken in Orlando. They are encircled by a rainbow structure, referencing not only the LGBTQ movement’s iconic flag, but also the LGBTQ community’s continuing embrace of those taken during the violence at Pulse.

“The gaps within the rainbow signify those we’ve lost, and contribute to the transformative nature of the artwork. The viewer’s perspective changes as they explore the project, and as the artwork transitions from day to night, aided by integrated lighting illuminating the center,” said Geckler. “In its powerful simplicity, 49 is meant to create a safe space for mourning and healing while simultaneously evoking the diversity, unity and strength of the LGBTQ community.”

Last year, in the days immediately following the Pulse attack, HRC transformed its headquarters into a tribute, installing images of the victims in our front windows. The eight-story composite carried the message "We Are Orlando," and drew thousands who came to mourn, seek comfort and pay their respects.

Our hearts, thoughts and prayers remain in Orlando and with the survivors, and the families and friends of the 49 sons, daughters, siblings, mothers, fathers, friends and loved ones taken that day. We are Orlando. And as we mourn, we also recognize that in the face of adversity, our community always rises, together.

For two decades, Megan Geckler has been refining her process of making large-scale, site-specific artistic interventions within architectural examples. Geckler experiments with off-the-shelf construction items, lifting them out of an easily recognizable context. She repositions these humble materials within sprawling artworks that allow them to transcend their primary and utilitarian functions.