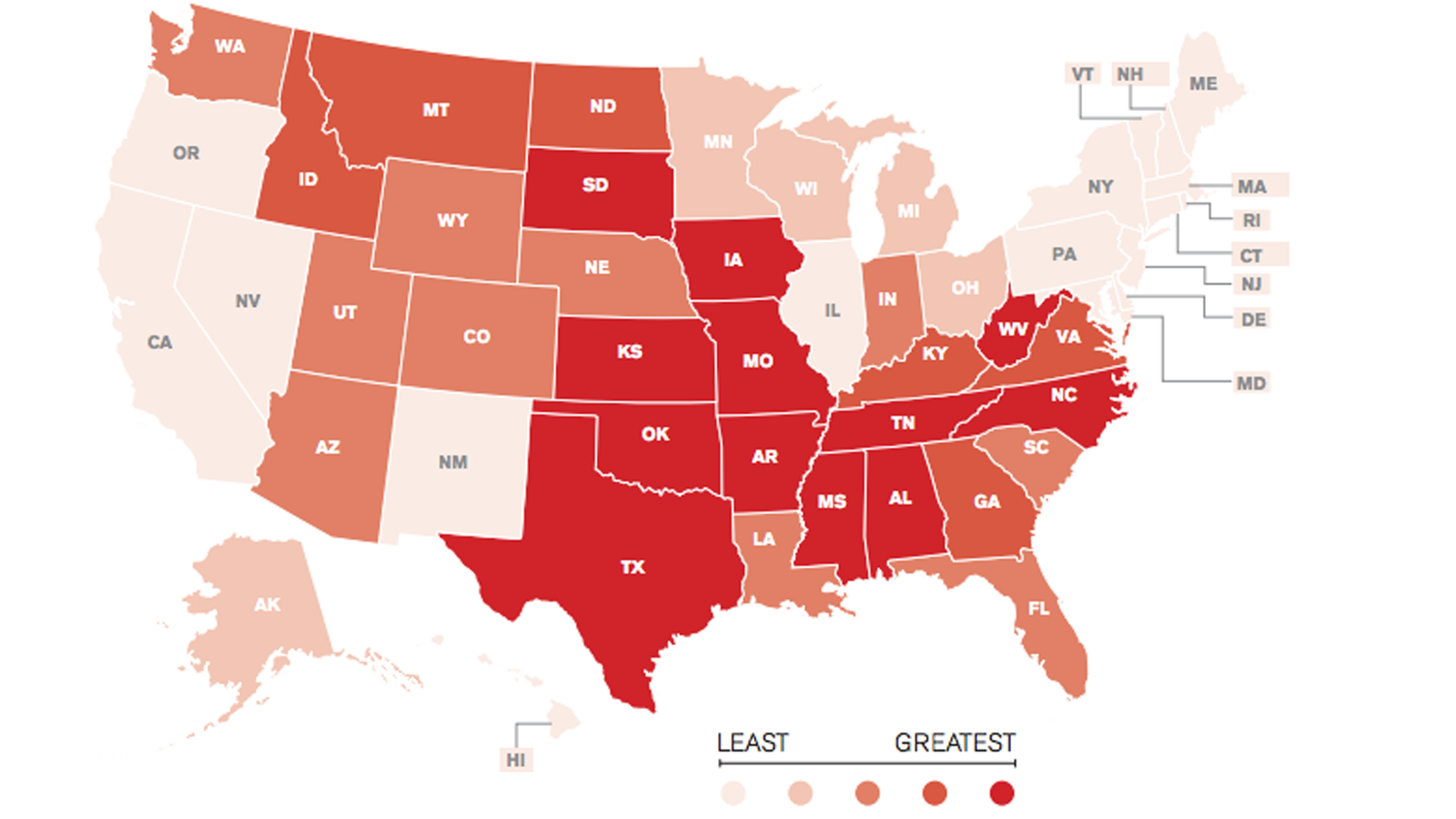 Today, HRC released a new report previewing battles against anti-LGBTQ state legislation expected in the year ahead. With at least 40 anti-LGBTQ bills in 16 states introduced so far, HRC anticipates that, as in 2016, anti-equality activists will push for legislation giving a license to discriminate against LGBTQ people under the guise of religion; measures specifically targeting transgender people; and proposals to eliminate local LGBTQ non-discrimination protections, among others. The new analysis also highlights opportunities to advance LGBTQ equality in 2017.

“Lawmakers seeking to target LGBTQ people would do well to heed the lessons learned in North Carolina, where legislators are still working to repeal HB2 and undo the damage wrought by that hateful law,” said HRC President Chad Griffin. “Like last year, we will be working closely with state partners across the country to prevent lawmakers from plowing down a destructive path that threatens LGBTQ people and wrecks a state’s economy and reputation. It’s time to recognize that Americans have moved inexorably in the direction of equality and there is no appetite for anti-LGBTQ politicking.”

In recent years, the steady increase in public support for LGBTQ equality has been met with a wave of anti-LGBTQ legislation being introduced in state legislatures. As lawmakers begin new sessions in state capitols around the country, HRC is bracing for a repeat of the 2015 and 2016 sessions, with hundreds of anti-LGBTQ bills filed. In 2016, legislators in 38 states filed more than 250 bills meant to restrict the rights of LGBTQ individuals and their families. With hard work, collective cooperation, and tight focus throughout the state and national LGBTQ equality movement, only 8 of those bills passed both legislative chambers, and after gubernatorial vetoes, just 5 bills actually became law. However, with the 2016 election results, 2017 has the potential to be even more challenging. As the 2017 legislative sessions begin, more states will have Republican single-party control in the House, Senate, and Governor’s office than in the previous legislative period.

The discriminatory legislation targeting LGBTQ people is taking many different forms across the country. They range from measures specifically targeting transgender people and seeking to prevent them from accessing sex-segregated facilities consistent with their gender identity; legislation aimed to authorize individuals, businesses, and taxpayer-funded agencies to cite religion as an excuse to refuse goods or services to LGBTQ people; and bills seeking to eliminate the ability of local governments to protect LGBTQ residents and visitors from discrimination, among other proposals.

Most of the anti-LGBTQ legislation considered in 2016 was introduced in southern states, and 2017 is expected to be the same with significant concerns being raised in Alabama, Arkansas, Kentucky, Mississippi, Missouri, Oklahoma, Tennessee, Texas, and West Virginia. In fact, in these and other states, more than three dozen bills are already on the docket for consideration, and there is no doubt there will be more as the legislative sessions progress.

Advocates are especially concerned with the threats posed by lawmakers in the Lone Star State. It is clear the Texas Legislature expects to take up religious refusal bills, anti-transgender legislation, and other discriminatory proposals. It will take the full force of the LGBTQ movement, business and civic leaders, and other stakeholders to ensure Texas does not pass anti-LGBTQ laws this session.

Although the legislative environment in a majority of states will not likely be open to considering pro- equality bills, there are a few places where movement is possible. Leaders in New Hampshire and New York will continue to consider whether to add gender identity to their state non-discrimination laws. Legislators in California are expected to remain on the cutting edge of passing laws protecting LGBTQ people. In Alaska, Arizona, Florida, Georgia, Idaho, Montana, North Dakota and Ohio, legislators will again be presented with the opportunity to add sexual orientation and gender identity to state non-discrimination laws, while in Colorado, Hawaii, Massachusetts, New Hampshire, New Mexico and Rhode Island, consideration could be given to laws protecting minors from incredibly harmful conversion therapy.

Last year marked one of the rare recent years where there was not a repeal of pro-LGBTQ state or local legislation on the ballot anywhere. Unfortunately, the future holds several challenges in attempts by anti-equality activists to undo important legislative protections for LGBTQ people.

Activists in Massachusetts have already secured enough signatures to place a repeal of the new gender identity public accommodations law on the ballot in November of 2018. Freedom Massachusetts, the campaign that includes the Human Rights Campaign and other organizations that secured the legislative victory, is already at work to protect the law when it goes to the ballot. Meanwhile, opposition forces in Washington State were unable to secure enough signatures in 2016 to take a repeal of the state’s 10-year- old non-discrimination law to the ballot, but are expected to make another attempt in 2017. And in Maine, extremists have received approval to collect signatures to place on the ballot the removal of “sexual orientation” from the state’s Human Rights Act.

After the governor’s veto of discriminatory anti-transgender student legislation in South Dakota, anti-LGBTQ forces in the state have threatened a ballot referendum if a bill similar to the one vetoed by Governor Daugaard does not pass in the 2017 legislative session.

The full report -- Preview 2017: Pro-Equality and Anti-LGBTQ State and Local Legislation -- can be found here.