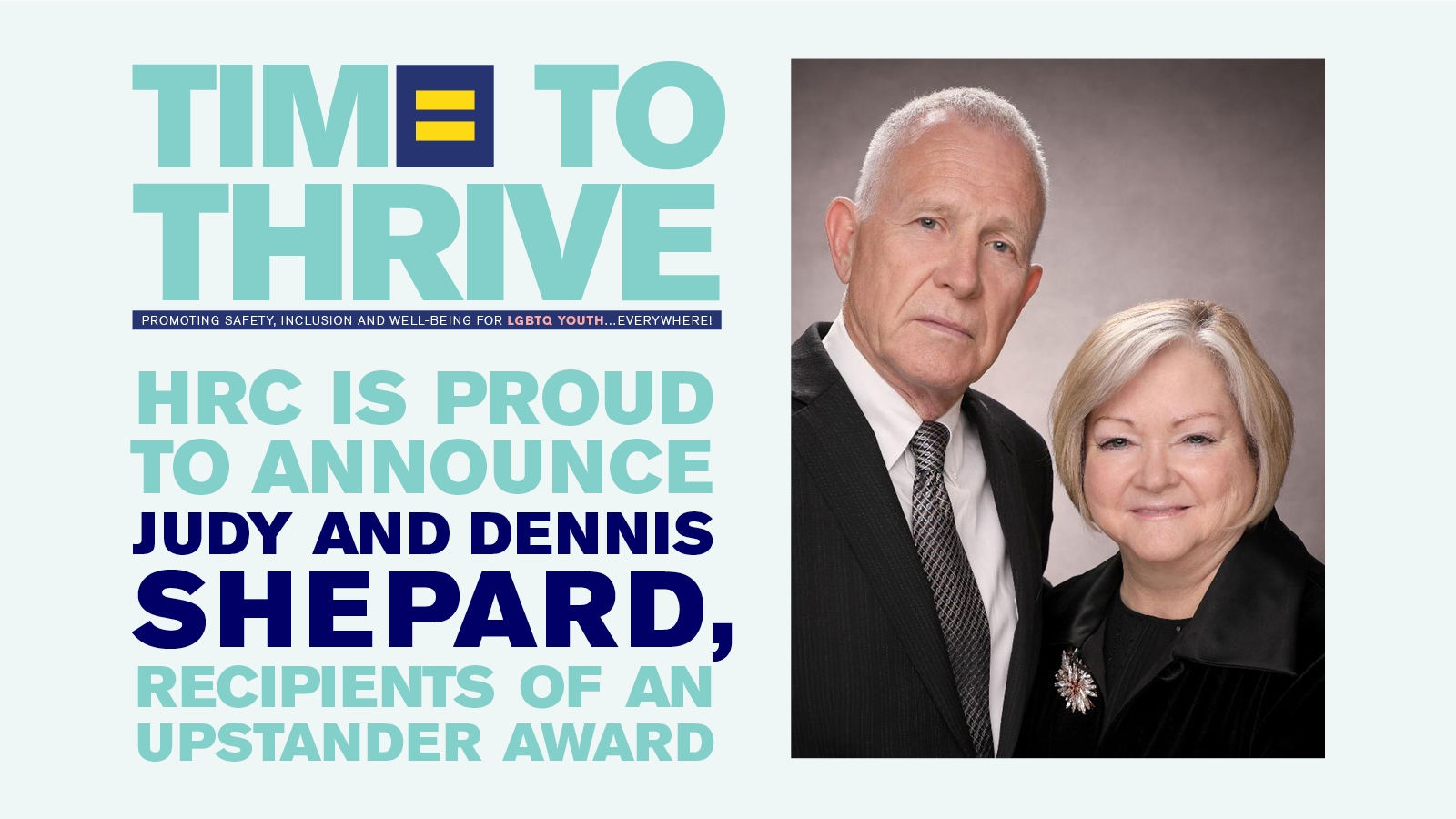 Today, the HRC Foundation announced that it will honor longtime allies and LGBTQ advocates Judy and Dennis Shepard with the Upstander Award at the organization’s sixth annual Time to THRIVE Conference on February 15-17 at the Anaheim Marriott in Anaheim, California.

“We are thrilled to honor Judy and Dennis Shepard with our Upstander Award for their tireless and fearless work for the LGBTQ community. For decades, they’ve not only been members of the HRC family, but true friends,” said HRC Foundation’s Acting Senior Vice President Jay Brown. “After the horrific murder of their son, Matthew, 20 years ago, Judy and Dennis chose to bravely rise up and confront the hate violence that plagues our country by establishing a foundation in their son’s name. They have since dedicated their lives to working to create a world where no LGBTQ or other marginalized person has to live in fear.”

The couple’s work through the Matthew Shepard Foundation continues to inspire, bringing hope and support to LGBTQ people around the world who are striving to be who they are, often in the most difficult of circumstances. Judy Shepard has served on the HRC Foundation Board of Directors since 2001.

In the aftermath of Matthew Shepard’s murder in Laramie, Wyoming, Judy and Dennis Shepard also joined with the family of James Byrd Jr., brutally murdered by white supremacists just months before Matthew’s death, to help pass the Matthew Shepard and James Byrd Jr. Hate Crimes Prevention Act (HCPA) in 2009.  They continue to advocate for comprehensive efforts to prevent and prosecute hate crimes.

In October of this year, on the 20th anniversary of his death, Matthew Shepard was laid to final rest at the Washington National Cathedral. Said HRC President Chad Griffin, “Our nation will never forget Matthew, and his life and legacy continue to inspire progress. By honoring his memory and his family, and by continuing to support the crucial work of the Matthew Shepard Foundation, we can help create a world where no person lives in fear because of who they are or who they love.”

Since its formation, the HRC Foundation has centered its efforts on providing a voice and support for LGBTQ youth, combating  hate crimes, and creating community dialogues around hate and acceptance.

HRC’s Time to THRIVE Conference is the premier event addressing the safety, inclusion and well-being of LGBTQ and questioning youth. The event brings together a wide range of youth-serving professionals to discuss best practices for working with and caring for LGBTQ youth and their families in schools, community centers, health care settings and beyond. It is co-presented by the National Education Association and the American Counseling Association. BBVA Compass and AT&T are presenting sponsors of the event.

The Time to THRIVE Conference features 65 workshops by more than 45 national and grassroots organizations dedicated to improving the lives of LGBTQ youth. HRC’s Youth Ambassadors and Welcoming Schools will also be featured at the conference. Additional speakers and honorees will be announced at a later date.