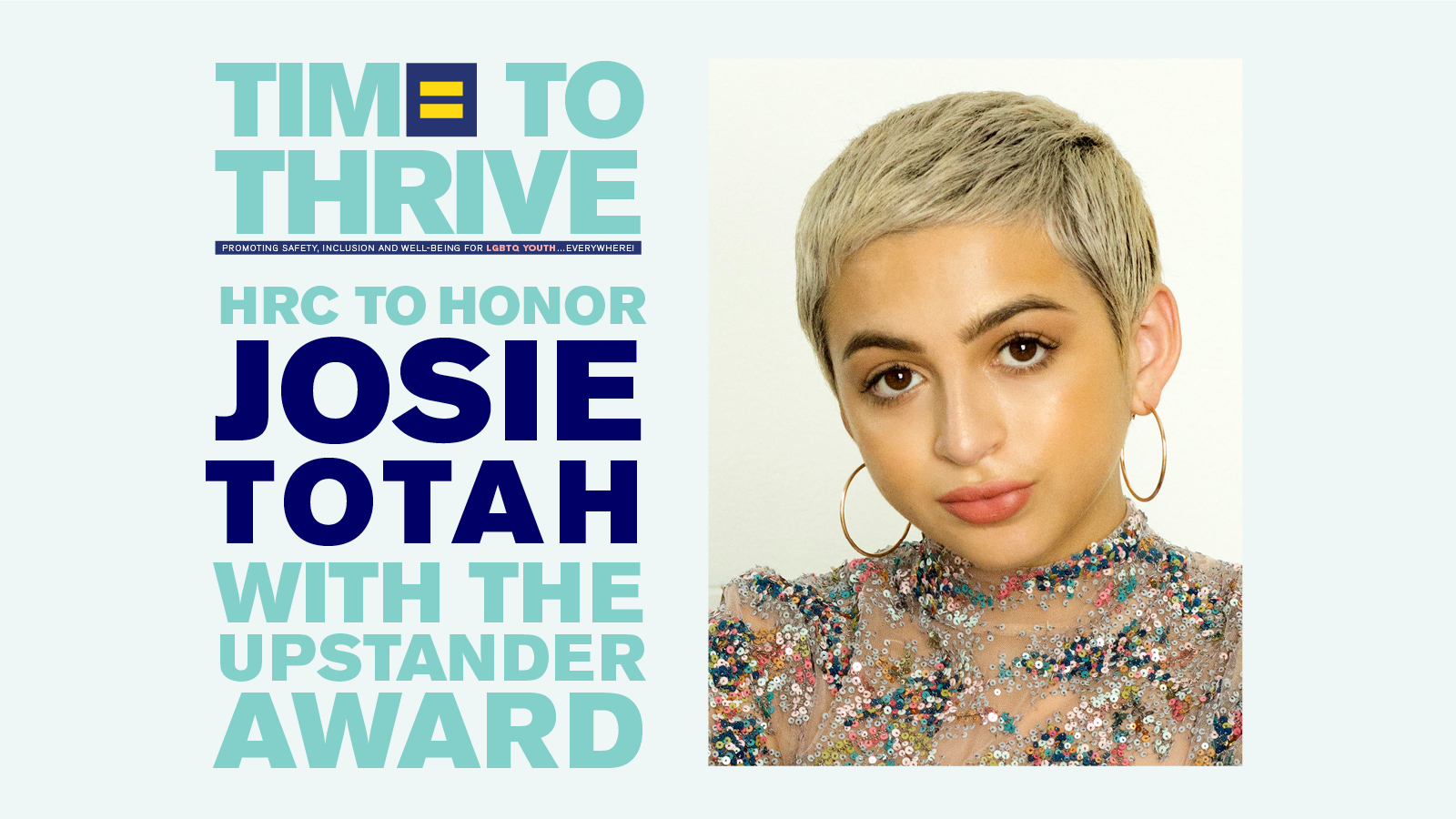 Today, the Human Rights Campaign Foundation (HRC) announced that it will honor actress and advocate Josie Totah with an Upstander Award at the organization’s sixth annual Time to THRIVE Conference on February 15-17 at the Anaheim Marriott in Anaheim, California. HRC also announced that the band OneUp will perform on the opening night of the conference.

“By living her truth as a trans woman, Josie is setting an inspiring example for trans and gender-expansive young people everywhere that they can live and thrive as their true selves,” said Vincent Pompei, Director of HRC's Youth Well-Being Project and Time to THRIVE conference. “We are so proud to call this amazing young actor part of our HRC family, and know that her powerful message will galvanize the youth-serving professionals at Time to THRIVE to go back to their communities with a renewed commitment to help create affirming, supportive spaces for LGBTQ young people.”

Last year, Totah, who starred in the NBC sitcom Champions, came out as transgender in a powerful op-ed for Time. “My pronouns are she, her and hers,” Totah wrote. “I identify as female, specifically as a transgender female. And my name is Josie Totah.” She explained that watching transgender teen and former HRC Foundation Youth Ambassador Jazz Jennings share her journey on her “I Am Jazz” reality television series provided a powerful model for her. At the time, both Totah and Jennings were 14.

“I looked over at (my mother) in the middle of the show and said, ‘This is me. I’m transgender. And I need to go through this,’” Totah said. “My mother, who is immensely supportive and gracious, said, ‘Okay, let’s do it.’” Totah began her acting career at a young age, with breakout television roles on the  Disney Channel and network shows, including a recurring role on Glee. Last year, HRC was proud to honor the young trailblazer with the HRC Visibility Award at the 2018 HRC Salt Lake Gala.

OneUp -- comprised of couple Adam Bastien and Jerome Bell -- first wowed the judges of The Voice with their rendition of The Spinners’ “Could It Be We're Falling in Love.”

HRC previously announced that it will honor advocates Adam Rippon, Brian Coleman, E.J. Johnson and Judy and Dennis Shepard with an Upstander Award during the Time to THRIVE conference. HRC’s Parents for Transgender Equality Council, HRC’s Youth Ambassadors and HRC’s Welcoming Schools Program will also be featured at the conference.

HRC’s Time to THRIVE Conference is the premier event addressing the safety, inclusion and well-being of LGBTQ and questioning youth. The event brings together a wide range of youth-serving professionals to discuss best practices for working with and caring for LGBTQ youth and their families in schools, community centers, health care settings and beyond. It is co-presented by the National Education Association and the American Counseling Association. BBVA Compass, AT&T and Toyota  are presenting sponsors of the event.

The Time to THRIVE Conference features 65 workshops by more than 45 national and grassroots organizations dedicated to improving the lives of LGBTQ youth. HRC’s Youth Ambassadors and Welcoming Schools will also be featured at the conference. Additional speakers and honorees will be announced at a later date. To register, visit www.TimeToTHRIVE.org.