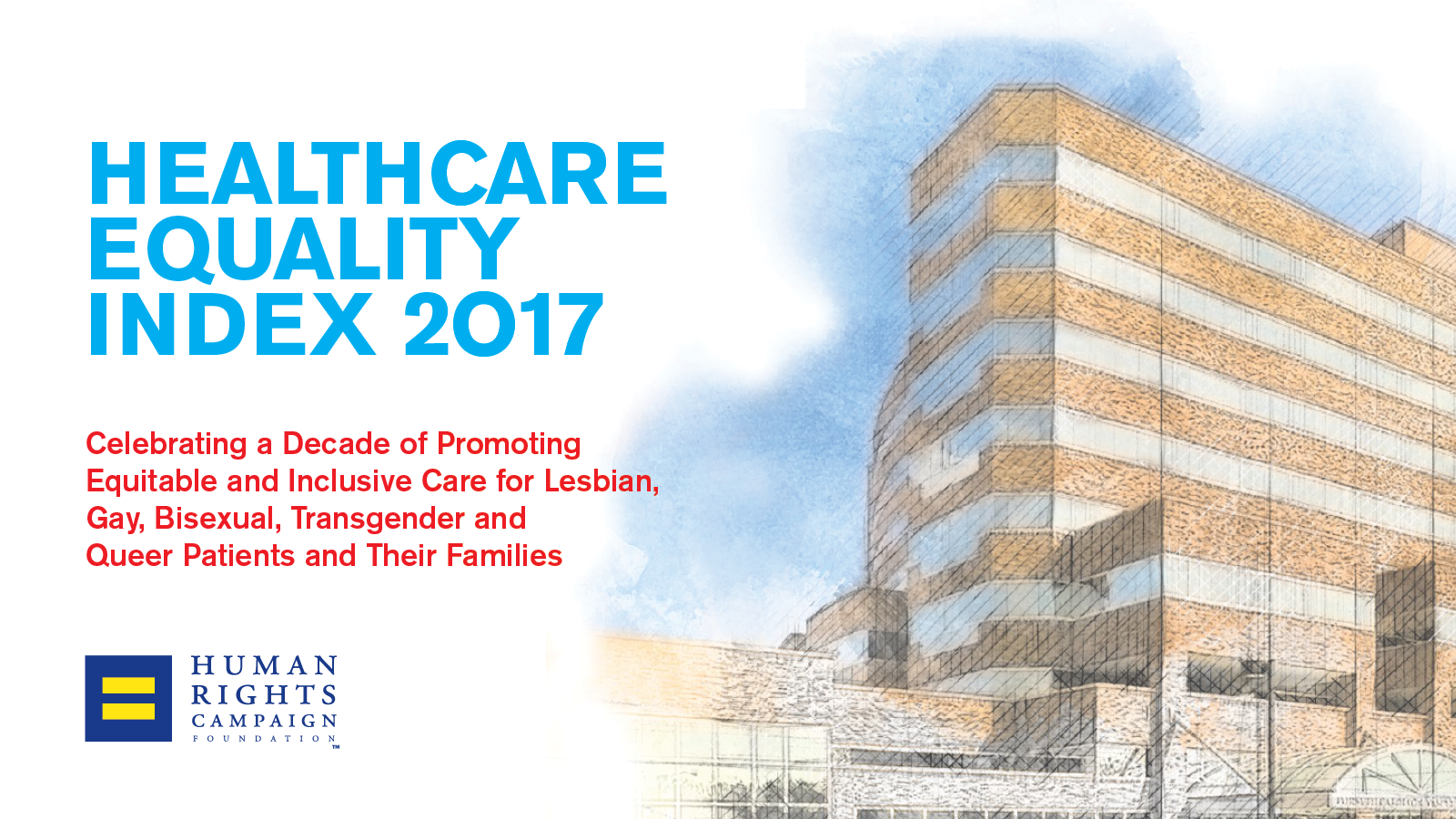 This year also marks the first time the HEI has awarded numerical scores -- and three quarters of the healthcare facilities actively participating in the survey scored 80 points or above.

“The 2017 HEI reminds us again that though we have made tremendous gains over the past decade, there is still much more work left for us to do. With some of our biggest battles still ahead of us, it is crucial that institutions continue to demonstrate that the march toward full equality is not slowing down,” said HRC President Chad Griffin. “The 590 participants in this year’s HEI continue this march in partnership with the LGBTQ community. For the past decade, the HEI has been the roadmap to closing the gap in ensuring equal care to LGBTQ patients and their families, and we urge every healthcare facility to join us in this continuing effort to provide inclusive care to all.”

This year’s HEI highlights the groundbreaking work taking place at two transgender youth clinics -- GENECIS at Children’s Health in Dallas, and the Center for Child and Adolescent Gender Care at Duke Children’s Hospital in Durham, North Carolina. Legislative attacks on the transgender communities in both of those states underscore the importance of the care and affirmation these clinics are providing transgender youth. In Texas, SB6, a bill targeting transgender people’s access to public facilities, passed out of committee and is up for a vote by the full state senate. And in North Carolina, the negative effects of HB2, which, like SB6, targets the state’s transgender community for discrimination, continues to significantly damage North Carolina’s reputation and economy.

The 10th edition of the HEI includes new criteria that raises the bar on what it takes to earn HRC’s “Leader in LGBTQ Healthcare Equality” designation. For the first time, HEI participants are awarded numerical scores for their implementation of LGBTQ-inclusive policies and practices in four areas; LGBTQ patient-centered care, LGBTQ patient services and support, fully-inclusive employee benefits and policies, and LGBTQ patient and community engagement. Participants receiving the maximum score in each section, for a total score of 100, earn the coveted status of “2017 Leader in LGBTQ Healthcare Equality.”

In the 2017 report, an impressive 303 facilities -- 51 percent of those actively participating in the survey -- met this year’s more challenging criteria to earn the Leader designation. Another 144 facilities earned a “Top Performer” designation for scoring between 80 and 95 points. With three quarters of actively-participating facilities scoring 80 points or more, it is clear that healthcare facilities are going beyond the basics in adopting policies and practices in LGBTQ care.

In addition to the positive scoring criteria, the 2017 HEI includes a fifth section focusing on responsible citizenship, and calling out activity that would undermine LGBTQ equality or inclusive patient care. Healthcare facilities may have 25 points deducted from their score for a large-scale official or public anti-LGBTQ blemish on their recent records. This year, Johns Hopkins Hospital became the first and only facility to receive this deduction.

Of the hospitals who did not participate in the 2017 HEI but were scored based on HRC’s research, only 61 percent have nondiscrimination policies that include both “sexual orientation” and “gender identity,” and only 52 percent were found to have an LGBTQ-inclusive employment non-discrimination policy. However, 95 percent of these facilities are committed to equal visitation, close to the rate of the facilities that actively participated in the survey.