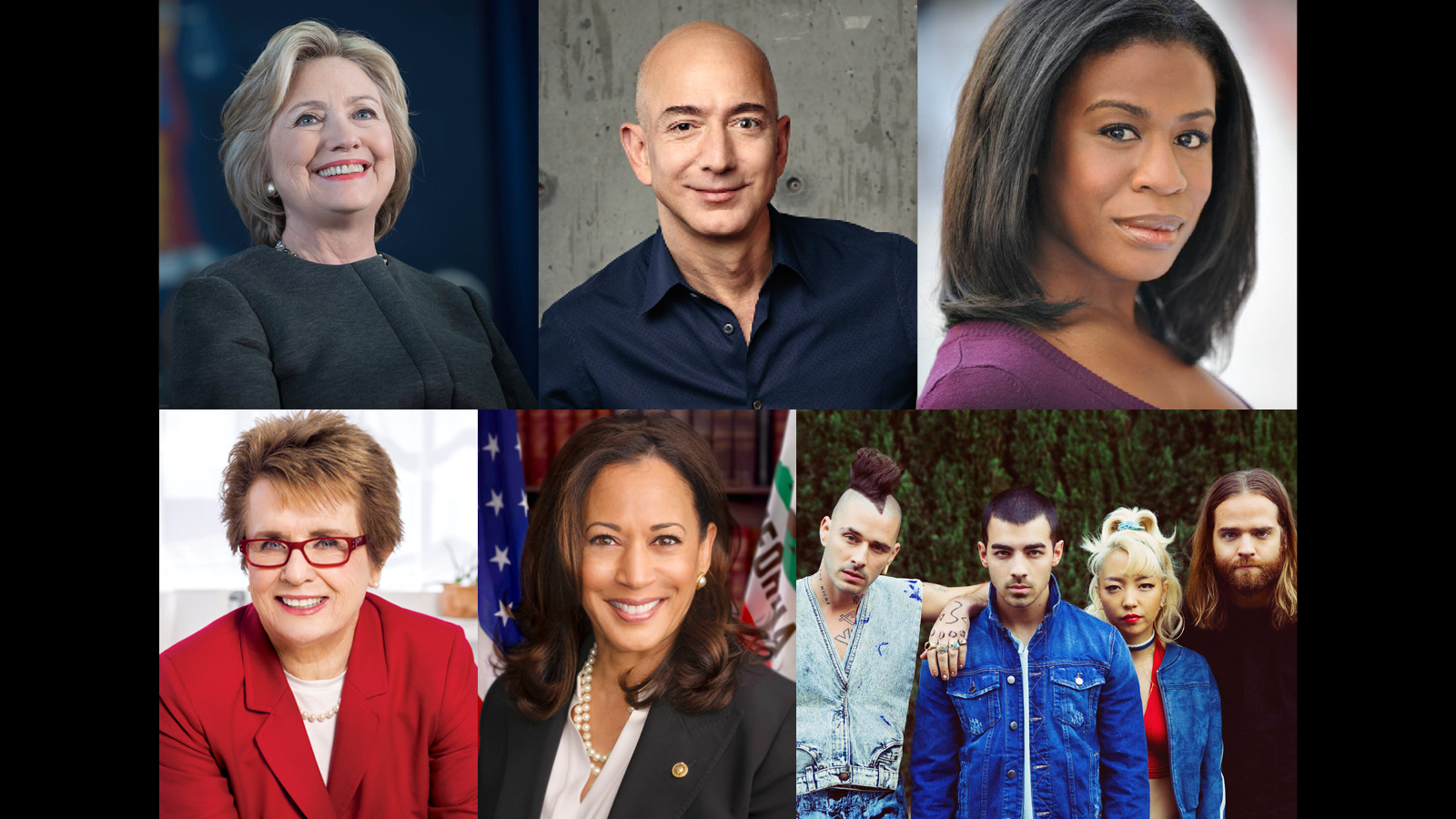 “Hillary Clinton has spent a lifetime fighting for the vulnerable, marginalized, and oppressed — and she’s not about to back down now,” said HRC President Chad Griffin. “As we confront powerful political forces built on hate and fear, Hillary — and the majority of American voters who backed her — have continued to champion the values that truly make America great. We are grateful to Hillary Clinton for being our steadfast champion each and every day."

“As a longtime supporter of LGBTQ equality, Jeff Bezos was one of the earliest corporate leaders to join our fight for marriage equality," Griffin continued. "We are proud to honor him with the HRC National Equality Award for his longstanding personal commitment to building a more equal society and shining a spotlight on the challenges LGBTQ people face in their daily lives."

“Billie Jean King is a champion in every sense of the word,” said Griffin. “Her tenacity and fearlessness not only made her a sports legend, it has made her one of the most effective advocates for social justice of our time."

Griffin added, “We are thrilled that DNCE will be performing at this year's National Dinner, and are grateful to have the support of Joe Jonas and the entire band. We couldn't be more excited to have DNCE cap off this incredible night in support of LGBTQ equality."

Hillary Rodham Clinton has served as secretary of state, senator from New York, first lady of the United States, first lady of Arkansas, a practicing lawyer and law professor, activist, and volunteer. Clinton ran for president in 2016, championing her belief that Americans are stronger together and making LGBTQ equality a pillar of her campaign with the most robust and ambitious LGBTQ plan any candidate for president has ever laid out. In July 2016, she became the first woman to earn a major party’s nomination for president, and went on to earn nearly 66 million votes — nearly 3 million more than Donald Trump. In her concession speech on November 9, 2016, she called on supporters to “never stop believing that fighting for what’s right is worth it.” Inspired by the widespread activism after the election, Clinton founded Onward Together, an organization that works to advance progressive values by encouraging people to organize, get involved, and run for office.

HRC will honor Jeff Bezos with the HRC National Equality Award, which recognizes the outstanding efforts of those who publicly stand up for the LGBTQ community, committing their time and energy to improve the lives of LGBTQ people and advance equality for all Americans. A longtime advocate for LGBTQ equality, Bezos was one of the largest financial backers of the fight for marriage equality. Under Bezos’ leadership, Amazon has taken several public policy stances in support of LGBTQ equality, ranging from public support of marriage equality to joining HRC’s Business Coalition for the Equality Act. Under his leadership, Amazon also launched the multi-award-winning series Transparent — a show revolving around a family grappling with the transition of their transgender parent. During a 2016 Emmy Award acceptance speech, creator Jill Soloway specifically thanked Bezos for his leadership in making the show possible. Transparent has helped to shape audience’s understanding of what it means to be transgender and increase LGBTQ visibility in homes around the world.

Billie Jean King is one of the greatest athletes of all time. Her fight challenging the unequal treatment of female athletes and her ongoing advocacy for equality for all resulted in President Barack Obama awarding her in 2009 the Presidential Medal of Freedom — the United States’ highest civilian honor. In 2006, HRC awarded Billie Jean King the organization’s National Equality Award. The critically acclaimed film Battle of the Sexes — in theaters now — features Academy Award® winner Emma Stone playing Billie Jean King and depicts the infamous 1973 tennis match where she defeated Bobby Riggs in one of the greatest and most watched televised sports events in history.  This groundbreaking event, which empowered women and educated men, is still remembered for its effect on society and its contribution to the women’s movement.

Multi-platinum selling band DNCE will perform at the event. Formed in the summer of 2015, DNCE first introduced themselves to audiences worldwide with the release of "Cake By The Ocean," their now four-time certified platinum-selling breakout smash. Cementing them as one of 2016’s breakout acts, the band took home the win for “Best PUSH Artist” at the 2016 MTV European Music Awards and “Best New Artist” at last year’s MTV Video Music Awards. 2017 has been a year of legendary collaboration for the multi-platinum selling band. They kicked it off with an anthemic chorus and infectious pop hook with their single “Kissing Strangers” featuring global superstar Nicki Minaj. Most recently, the band joined forces with icon Sir Rod Stewart on their reimagined version of “Da Ya Think I’m Sexy.” They debuted the hit with an incredible performance from Las Vegas on the 2017 MTV Video Music Awards which was noted one of the evening’s highlights. DNCE is frontman Joe Jonas, bassist & keyboardist Cole Whittle, guitarist JinJoo, and drummer Jack Lawless.

The nation first came to know Gold Star father Khizr Khan with his powerful and heartbreaking speech at the 2016 Democratic National Convention. A patriotic American Muslim, Khan blasted Donald Trump’s politics of hate and fear by sharing the story of his son, U.S. Army Captain Humayun Khan — who paid the ultimate sacrifice in service to our nation. Khan continues to be a formidable voice speaking out against the Trump-Pence administration’s attacks on Muslims, immigrants, and other minorities.