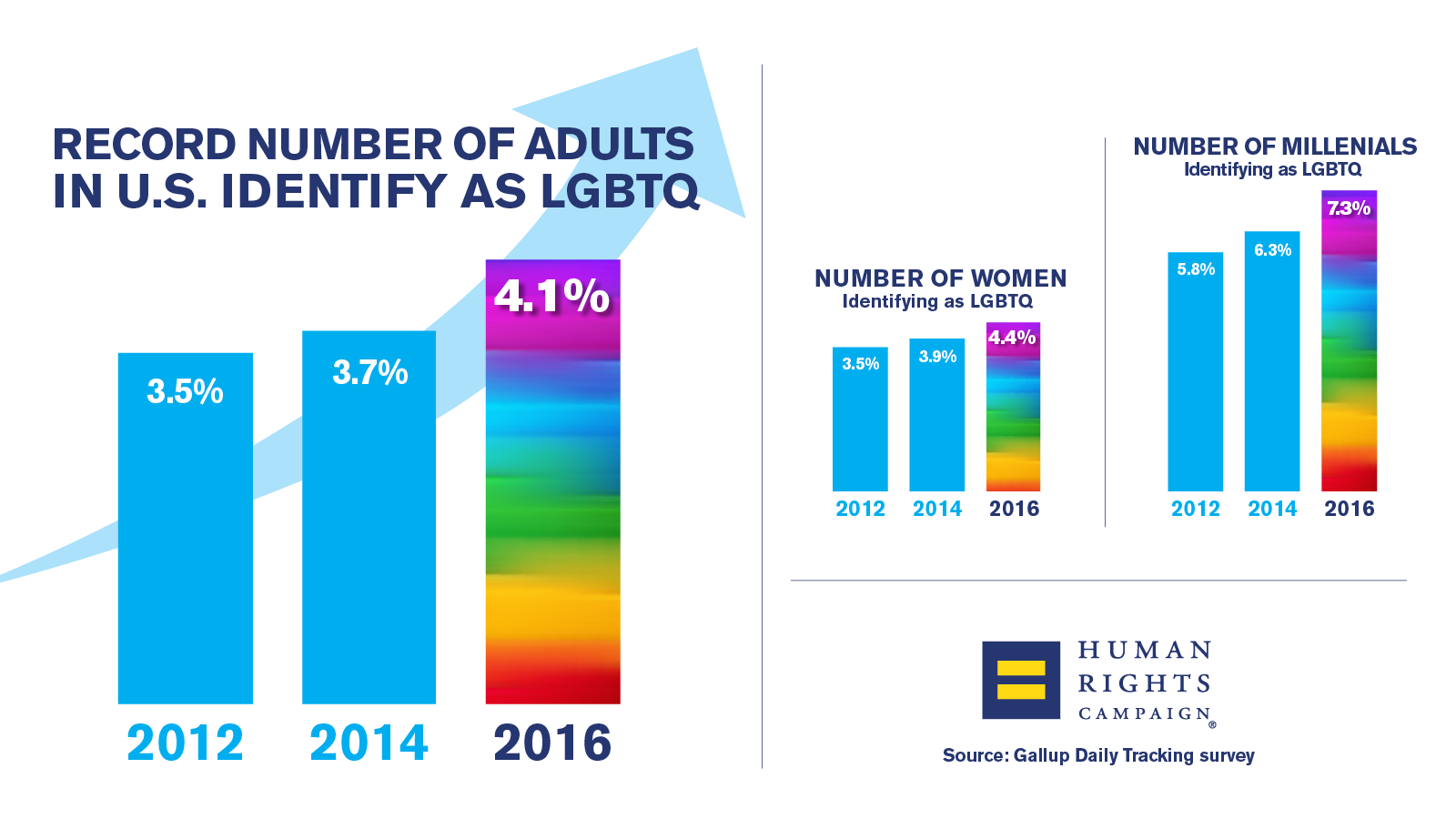 Today, the Human Rights Campaign (HRC) Foundation, the educational arm of the nation’s largest lesbian, gay, bisexual, transgender and queer (LGBTQ) civil rights organization, responded to a new Gallup survey reflecting a historic increase in adults in the United States identifying as LGBTQ -- 10 million, or 4.1 percent of the population, compared to 8.3 million just four years ago.

"This survey reflects the fact that in just the past four years, there has been a historic increase in American adults boldly coming out as LGBTQ, often at great risk, but it does not take into account the countless LGBTQ Americans who remain closeted -- especially in areas of the country where our community lacks protections from discrimination and violence," said HRC President Chad Griffin. “However, the Gallup survey does confirm what we already know -- the LGBTQ community is at a turning point when it comes to political relevance. On the same night that we saw Donald Trump win the presidency, we saw North Carolina Gov. Pat McCrory, the face of anti-LGBTQ equality, become the only incumbent governor to lose re-election this fall, underscoring that reality that anti-LGBTQ discrimination is not only wrong, it’s now a political liability.”

The Gallup survey notes that the growing clout of LGBTQ voters and consumers is driving inclusive policies and marketing strategies across corporate America, as well as the business community’s opposition to anti-LGBTQ legislation like McCrory’s discriminatory HB2 law in North Carolina.

The Gallup Daily tracking survey of 1.6 million people finds that the increase in American adults identifying as LGBTQ is largely driven by millennials, 7.3 percent of whom identify as LGBTQ, and women, 4.4 percent of whom identify as LGBTQ. When broken down by race, all categories saw an increase in the number of adults identifying as LGBTQ -- with the largest increases in Asian and Hispanic populations.

No one survey can tell the whole story of the LGBTQ population, but data like this is vital for advocates and policymakers alike. Some federal government surveys collect voluntary, self-disclosed information on sexual orientation and gender identity, allowing government and social service organizations to better understand and serve the entire population. However, federal surveys are not required to collect information on sexual orientation and gender identity -- although HRC has supported efforts to change that.