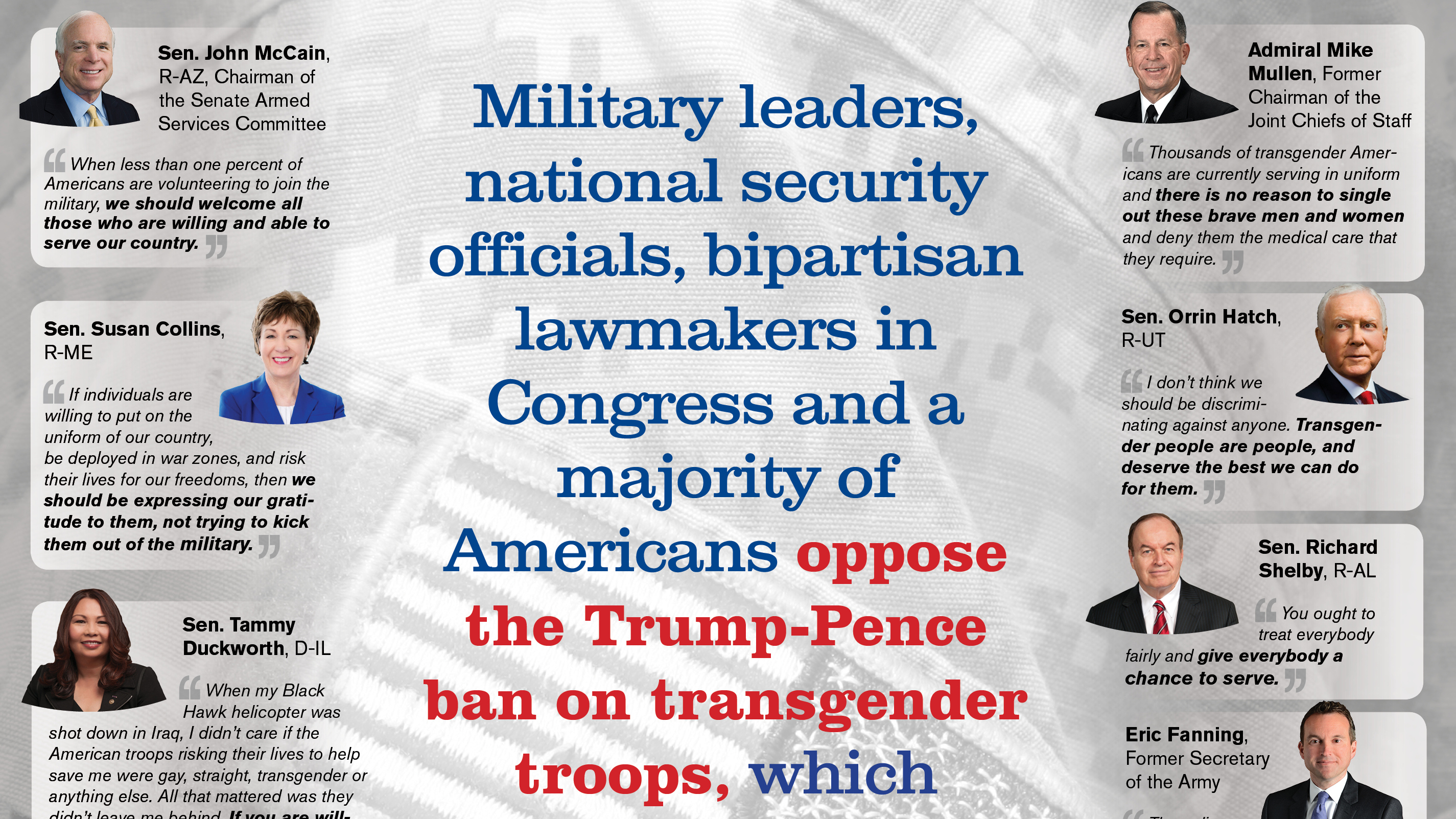 Today, the Human Rights Campaign, Lambda Legal, OutServe-SLDN, American Military Partner Association, and Gender Justice League published a full-page USA Today ad featuring leading military, national security and bipartisan officials who agree with the majority of Americans that the Trump-Pence Administration’s ban on transgender troops is wrong and hurts military readiness. The ad encourages the vast majority of Americans who oppose the Trump-Pence Administration’s effort to ban up to 15,000 active duty transgender troops to call the White House and demand they put our military readiness and brave servicemembers ahead of politics. The ad will also run in every local Gannett paper nationwide on Wednesday.

“Military leaders, national security officials, and bipartisan lawmakers agree with the majority of Americans who believe the Trump-Pence Administration's ban on transgender troops is not only wrong, but hurts military readiness,” said HRC President Chad Griffin. “Donald Trump’s erratic tweets and half-baked orders disrespect the bravery of countless transgender people who have fought and sacrificed for our country. It's long past time the White House abandon this reckless, unconstitutional ban and give these brave individuals the dignity, respect and honor they deserve.”

“Six federal courts have already found the tweeted ban on transgender military service is likely unconstitutional, adding the authority of the courts to the widespread criticism the proposed ban has received from military leaders and members of both political parties, not to mention the overwhelming majority of Americans who oppose the ban,” said Sasha J. Buchert, Staff Attorney at Lambda Legal. “It is time for the Trump Administration to end this misguided and discriminatory policy, as there is no amount of polish that will disguise its obvious and unconstitutional intent.”

"This ad is a timely and critical reminder of how the Trump-Pence Administration is woefully out of touch, discriminatory, and disrespectful in their position on the brave and courageous service our trans service members demonstrate each and every day," said Matt Thorn, President & CEO of OutServe-SLDN. "From former Chairmen of the Joint Chiefs of Staff to lawmakers on both sides of the aisle, along with a majority of Americans; all have agreed that transgender service members are not a burden but essential assets for our 21st century military, our readiness as a country, and our strategic interests. The President and Vice President should heed the words of our current and former military leaders, our civilian leadership, our congressional overseers, and retreat on their pursuit of this blatantly unconstitutional, discriminatory ban. The bottom line in an all-volunteer force must be if you meet the standards and requirements you should and must be allowed to serve our country, regardless of race, gender, sexual orientation, and yes, gender identity."

“The Trump-Pence Administration’s vicious targeting of actively serving military families with a discriminatory transgender ban is unconscionable and based on nothing but blatant anti-LGBT animus,” said Ashley Broadway-Mack, President of the American Military Partner Association. “No military family should have to face the uncertainty and fear Trump and Pence are inflicting on their lives with this ban. This ad is just a snapshot of the overwhelming number of military experts and bipartisan members of Congress who all agree with the far majority of Americans that any qualified American — regardless of their gender identity — should be able to serve our country.”

The advertisement reads, “Military leaders, national security officials, bipartisan lawmakers in Congress and a majority of Americans oppose the Trump-Pence ban on transgender troops, which would hurt military readiness. Tell Donald Trump and Mike Pence not to put their politics ahead of our troops. Call the White House: 202-456-1414.”

In August, HRC joined as an organizational co-plaintiff in Karnoski v. Trump, a case brought by Lambda Legal and Outserve-SLDN, challenging the ban in court. HRC is joined by the American Military Partner Association, Gender Justice League, and nine individuals as co-plaintiffs in the case. Six separate federal courts have issued rulings blocking implementation of the ban. Barring further court action, the administration cannot implement this ban.