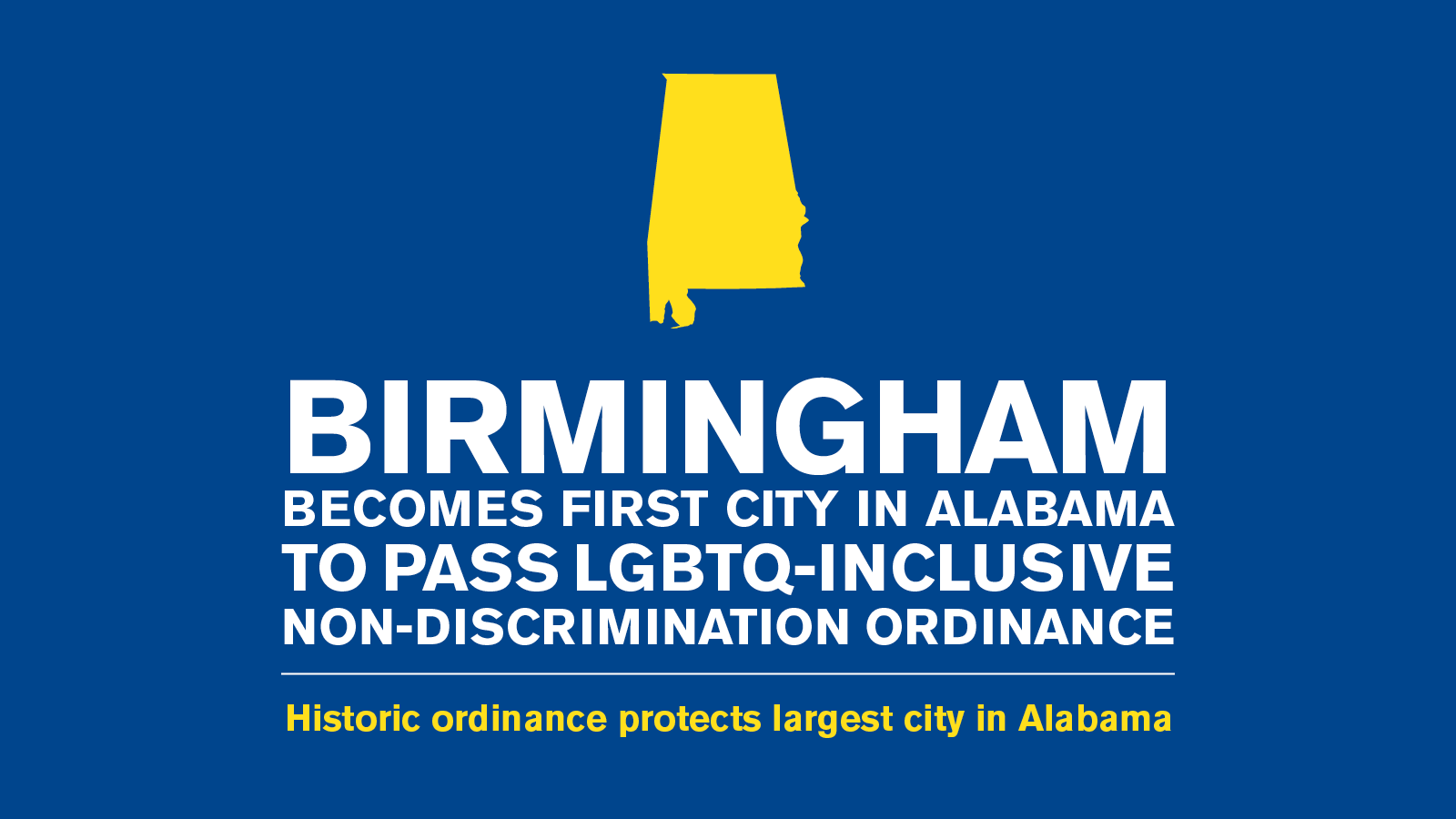 This ordinance is the culmination of more than ten years of work from local LGBTQ grassroots organizers and a pro-equality coalition including Equality Alabama and HRC.

“Today, the City of Birmingham made history in Alabama by taking a crucial step toward ensuring LGBTQ residents are protected from discrimination,” said Chad Griffin, president of the Human Rights Campaign. “In doing so, Birmingham joins Jackson and Magnolia, Mississippi in setting an example for cities across the South to follow. Now, it is time for all southern cities to guarantee the right of LGBTQ people to live their lives free from discrimination.”

“Today is a proud day for Birmingham, now the first city in Alabama to pass a non-discrimination ordinance that protects the LGBTQ community,” said Eva Kendrick, HRC Alabama state director. “Now it is time for other cities in Alabama to follow Birmingham’s lead in protecting all its people from bias and discrimination. Thank you to Council President Austin for his leadership in championing this ordinance and our partners Michael Hansen, Equality Alabama and Alabama Stonewall Democrats for their years of work to secure this victory for all of Birmingham. We look forward to the mayor signing this important ordinance into law.”

Birmingham’s citizens will be the first in the state to be protected from discrimination in housing, public accommodation and employment on the basis of real or perceived race, color, religion, national origin, sex, sexual orientation, gender identity, disability or familial status. The ordinance also provides for the creation of a Birmingham Human Rights Commission to “promote principles of diversity, inclusion, and harmony in the City of Birmingham,” to advise the City Council and Mayor, and to receive complaints of discrimination under the ordinance.

Alabama is one of 31 states without fully-inclusive, comprehensive LGBTQ non-discrimination protections.

In 2014, HRC launched Project One America, an initiative geared towards advancing social, institutional and legal equality in Alabama, Arkansas and Mississippi. HRC Alabama continues to work to advance equality for LGBTQ Alabamians who have no state level protections in housing, workplace or public accommodations. Through HRC Alabama, we are working toward a future of fairness every day -- changing hearts, minds and laws toward achieving full equality.