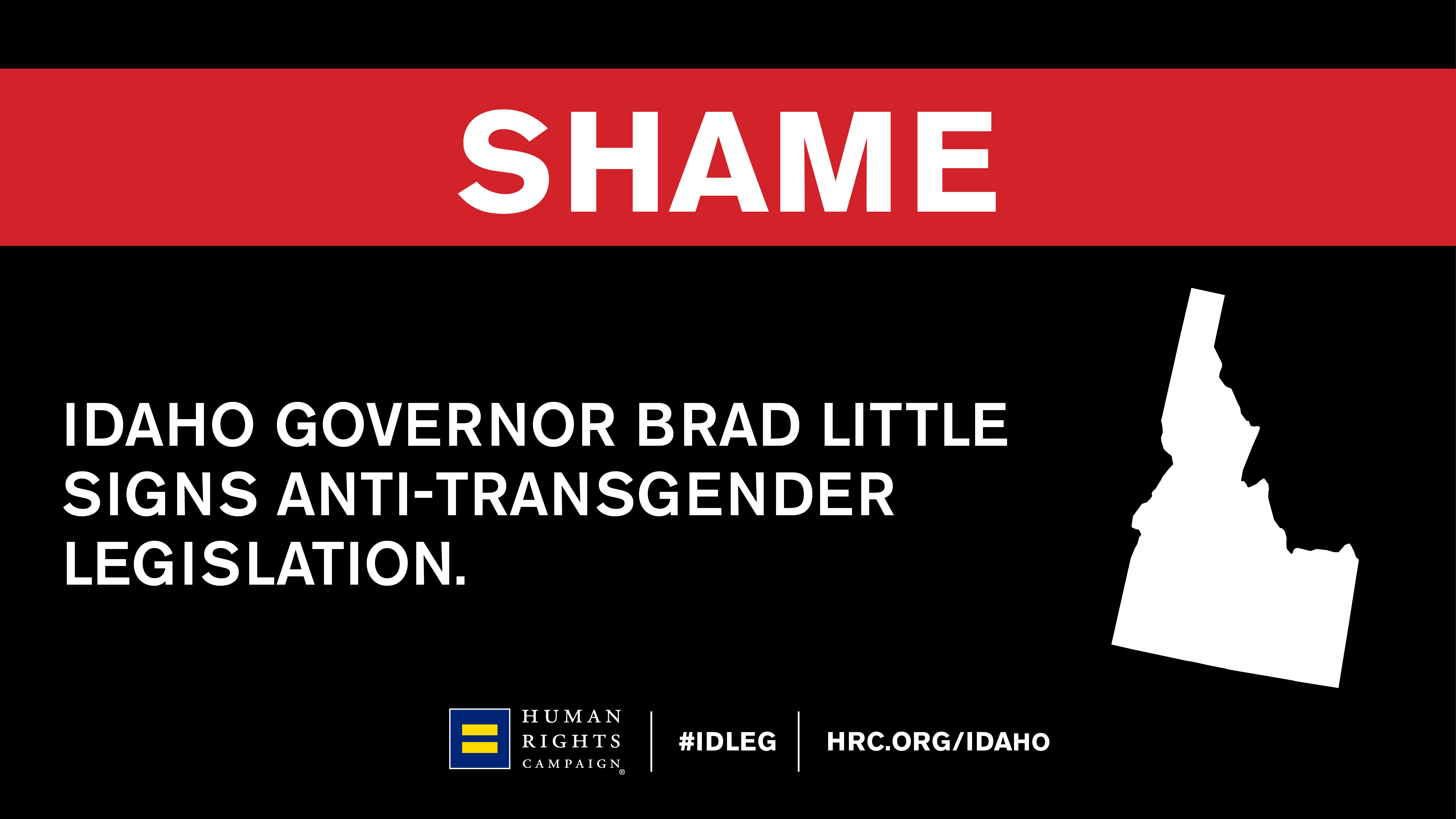 Today, HRC responded to the news that Idaho Governor Brad Little has signed two pieces of discriminatory anti-transgender legislation, commonly referred to as HB 500 and HB 509, even as his state and the world reel from the effects of COVID-19. HB 500 will bar transgender women and girls from participating in sports consistent with their gender identity. HB 509 flies in the face of a recent court decision by forbidding transgender and nonbinary Idahoans from changing their gender marker on their birth certificates. Both laws are unconstitutional and will result in litigation at the cost of the Idaho taxpayer, which is particularly appalling during these uncertain times.

“We are living in an unprecedented global health crisis, with confirmed cases of COVID-19 increasing on a daily basis in Idaho, across the United States and around the world, but Governor Brad Little and the Idaho legislature have decided to prioritize the demonization of transgender people,” said Alphonso David, president of the Human Rights Campaign. “This is unacceptable, and a gross misuse of taxpayer funds and trust. Idaho is leading the way in anti-transgender discrimination, and  at a time when life is hard enough for everyone, Idaho’s elected leaders will be remembered for working to make their transgender residents’ lives even harder. Shame on Governor Little and the legislators who championed these heinous pieces of legislation.”

Idaho is now a national innovator in discrimination, having passed and signed into law first-of-its-kind anti-transgender legislation. It also becomes the first state in the country this year to enact legislation that specifically singles out the transgender community for discriminatory treatment.

H.B. 500 forbids transgender girls from being able to play on sports teams with other girls, and it will subject all girls to the risk of invasive, expensive, and inappropriate testing.  It is so clearly unconstitutional that Idaho’s current Attorney General and five previous Attorneys General of Idaho all urged the legislature and Governor to prevent the bill from becoming law.  Yet, legislators and the governor did not listen and signed taxpayers up to bear the cost of defending this discriminatory legislation in court.

HB 509 flouts a recent decision by a federal court and, again contrary to the advice of the Idaho Attorney General, guarantees that Idaho taxpayers will be paying to defend yet another discriminatory law - this time one that impedes transgender people from obtaining a birth certificate updated with the correct gender marker.

The bills were also opposed by business groups and medical professionals. Last week, the Human Rights Campaign and Freedom for All Americans re-released a letter signed by 40+ national businesses opposing anti-transgender legislation such as the bills signed into law by Governor Little.

HRC is grateful to the leadership of groups and activists on the ground that have been fighting against the spate of anti-LGBTQ legislation in Idaho, especially the coalition Moving Towards Freedom. The coalition is made up of the ACLU of Idaho, Add The Words, Beloved Bodies, Idaho Coalition Against Sexual and Domestic Violence, Legal Voice, Planned Parenthood Votes Northwest and Hawaii, and the Pride Foundation.